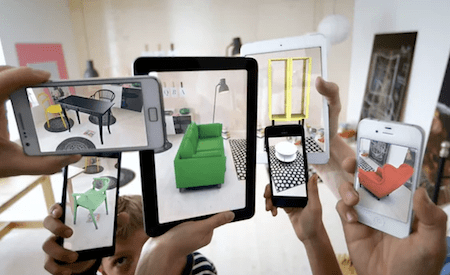 Augmented reality (AR) is here to wow us. It has gained popularity in the gaming industry, with the likes of Pokémon Go achieving much fanfare. By 2020, revenue is forecast to reach approximately R1.5 trillion globally.

AR’s growth is a result of an increasing need to create immersive experiences for the consumer who no longer wants to live within or outside the box, but wants a mix of both. The blend between reality and virtual spaces has surged consumer interest, allowing them to experience a tangible world that can be manipulated with 3D renderings.

From video gaming to social media, AR is becoming the go-to guide for how to attract a mass audience and keep them engaged. It will probably take over many of the virtual and real spaces we interact with, and e-commerce is no exception. In fact, e-commerce has so much to gain from the relatively new technology. Businesses trying to increase sales are at a considerable advantage if they’re experimenting with it.

As online shopping becomes commonplace, growing at a yearly rate of about 20% in South Africa, competition is abundant and experiences somewhat the same. And even though online shopping is hard on the heels of physical stores, it’s still not the real thing.

You just don’t know what you’re buying: Is the outfit going to be the right fit; are you actually buying a couch or a miniature replica? You get the picture; and customers are hesitant about shopping online as a result.

AR is here to change that. It creates an experience like no other anywhere you are. What’s more, the technology is arguably inexpensive for the consumer. All they need in most cases is their smartphone. As time goes on, mobile phones will be taken over by AR headsets, which are already on the market but aren’t affordable.

Even while using a smartphone, AR is still a very effective tool for creating a reality blended between 3D and real world objects. The experience cuts out the need to go into a store and test a product. A consumer can shop online, and superimpose the product into a real space.

Less of a guessing game

For instance, browsing for make up is less of a guessing game and more informed. The consumer takes a selfie, and a virtual layer is applied to their faces. They get an idea of how they’re appearance is going to change for better or worse. Ultimately, they don’t make the mistake of purchasing the wrong product, and going through a tedious return process. So even if they’re shopping online, consumers get an in store experience.

The potential yield of AR in retail hasn’t gone unnoticed. IKEA allows shoppers to redecorate their homes using 3D renderings of furniture that’s superimposed into a real living space. This in itself impresses the consumer, and sets brands like IKEA apart from the rest. As a result, more customers are going to opt for such brands.

Brands can’t afford to ignore the potential benefits AR has on offer. Just like brands that ignored the digital age, there’s a danger of noticing too late and playing a game of catch up with brands that establish themselves in the use of such a technology.

At the same time, brands experimenting with AR shouldn’t treat it as a trend. It should play an integral role in shaping their future strategies. Its somewhat imperfect applications are exactly what should incentivise businesses to freely experiment, and perfect the outcome as they move along. Early adopters will master AR for their business better and those who ignore it will be left in virtual dust.

Tendai Matsika is a copywriter for Isobar SA