LATEST NEWS
Home News From Gordhan and Ndlozi to Survé and Maimane: A media gathering of note

From Gordhan and Ndlozi to Survé and Maimane: A media gathering of note 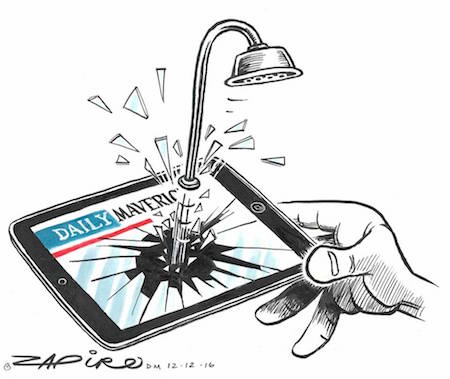 Cape Town is at last getting a shot at hosting one of the Daily Maverick’s The Gathering events. This time, though, it’s the inaugural The Gathering Media Edition, and the keynote speaker is Pravin Gordhan.

Gerald Schreiner, head of business development at the Daily Maverick, says that the digital title’s readership has grown massively in the last few years, and to date they have hosted all their big events in Johannesburg. ​“Now it’s Cape Town’s turn and being home to several large media organisations, we thought it’d be good to create an opportunity to stage this unique event here.”

The Gathering Media Edition will take place at the Cape Town International Convention Centre on 3 August. The one day conference, focusing on media issues, is an an extension of the Daily Maverick’s highly successful political economy event The Gathering, which takes place in Johannesburg each year.

The conference will bring together media, business, government, opposition parties and civil society to discuss the problems facing the media in South Africa. It aims to raise awareness for the importance of freedom of speech, truthful communication and authenticity across all platforms and will highlight the greater social consequences of the deteriorating media.

The Media Gathering will feature powerful speakers and heavy hitters from South African politics, business and media, including a keynote address by Pravin Gordhan. Other speakers include Save SA’s Sipho Pityana, Independent Media’s Iqbal Survé, opposition leader Mmusi Maimane, the EFF’s Mbyiseni Ndlozi, broadcaster Redi Thlabi, Luke McKend from Google and businesswoman Wendy Applebaum discussing fake news, state attempts at regulation, the global demise of business models and the impact of all of this on South African society.

“We didn’t want this to be a media conference but rather a conference about media. We operate in a precarious time and we need to let people know that. So speakers come from all aspects of South African politics, business and media. We need to educate people about the fact that media affects all aspects of our lives, and that we can’t think of media as operating in a vacuum that will always be there,” said Schreiner.

News media is under pressure across the globe and Schreiner believes the conference is important in both the local South African and the global context. “The impact is far-reaching and in the South African context the deterioration of the media landscape has run parallel to the increasing levels of corruption and government’s lack of accountability. It’s no coincidence that the state capture narrative has prospered in a time when newsrooms have been cut to the bone and corporate South Africa has refrained from supporting operations deemed ‘too political’,” he said.

Events are becoming an increasingly popular income stream for media owners as well as an effective tool for stakeholder engagement. Schreiner says the Daily Maverick is not looking at ROI (return on investment) limited to financial returns.

“For us it’s also a great marketing opportunity to grow our brand. We put on great events that dominate the news agenda and with the experience from past years, we’ve managed to make this profitable at the first go because of the track record we can provide to returning sponsors Nando’s and new sponsors, M&C Saatchi Abel,” he said.

Schreiner believes the conference’s intention is ultimately to change people’s mindsets that all is well in the South African media. It aims to inform stakeholders and debate their role in the media landscape, as well as to motivate people in business and government with the power to take action.

“A ‘hands-off’ approach to supporting independent voices is no longer an option. The country is being pillaged, and yet people can’t or won’t support truly independent outlets for fear of protecting their bottom line. We need to change that thinking, because credit downgrades, emigration, disinvestment and negative growth costs way more,” he said.