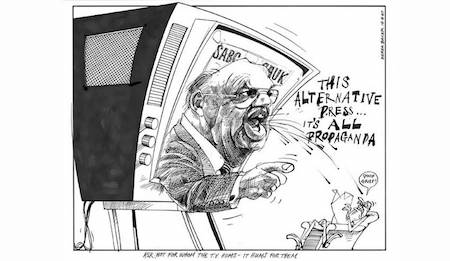 As was the case in cartoonist Derek Bauer’s heyday, the alternative media today is often seen as aggressive, confrontational and unapologetic, standing in sharp contrast to some tame and captured titles in the media landscape.

Like a Derek Bauer caricature, 1985 was a blood-spattered year in South Africa. PW Botha declared a state of emergency to break the mass resistance to apartheid that was making the country ungovernable.

Studying at Rhodes University as a second-year journalism student, I was rudely shaken out of my high school naivety and white comfort zone. I tried to make sense of my role as a journalist in a country governed by a paranoid minority, with racist laws that choked media freedom and resources that pumped out propaganda.

We had “fake” news back then. 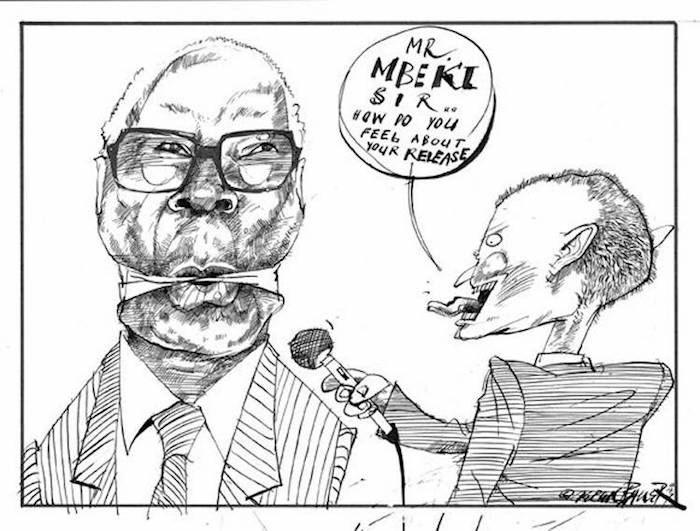 Cartoon: Rivonia trialist Govan Mbeki was released from Robben Island on 5 November 1987, but was gagged and restricted to the magisterial district of Port Elizabeth. Cartoon by Derek Bauer.

Grahamstown was a microcosm of the rest of the country – on fire with consumer and school boycotts, weekly political funerals, detention without trial, bannings, state brutality, curfews and repression. SADF Buffels – armoured troop carriers – were permanently stationed at the entrance to the townships at the top of Raglan Road. A military surveillance spotlight from Settlers Monument on the hill stabbed the night sky – bypassing the “cocooned” white part of town – to scan across the township streets of Joza during curfew.

This is the messed up South Africa that gave birth to alternative media such as the Weekly Mail. Shortly after the launch in 1985, Bauer and his grotesque caricatures could be seen on the pages of the gutsy newspaper which shook up mainstream media.

The exhibition – Alternative Press – pays tribute to the role that Bauer played in capturing the bloody chaos and distortions of the hell-raising 1980s, while carrying a hint of the grim frenzy of Welsh artist Ralph Steadman who famously partnered with gonzo journalism founder Hunter S Thompson.

The work also pays tribute to the alternative media of that time. It underscores a deeply ironic reference to today where we see the emergence of a new alternative media and where we are faced with different threats to media freedom.

Veteran comic artist Andy Mason aptly describes the impact and significance of the Weekly Mail and Bauer in his expertly researched yet under-valued history of cartooning in South Africa, What’s So Funny. Mason writes that the Weekly Mail editors “taunted the established press, revealing them by comparison to be too tame to offer genuine resistance to the apartheid regime. This anger and recklessness was captured in Bauer’s cartoons.”

Unlike most of his contemporaries in the white-run media, Bauer’s cartoons were “consistently confrontational, unapologetic and controversial”, writes Mason. 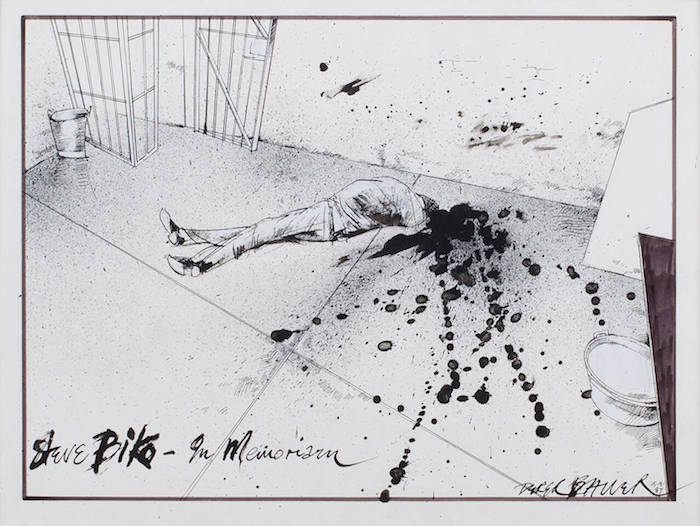 Cartoon: This Bauer cartoon was published in the Weekly Mail in 1987 to commemorate the 10th anniversary of Steve Biko’s death in detention.

He was an anti-apartheid cartoonist, but he was not PC. He didn’t conform to anyone’s agenda and saw things from his own perspective and understanding.

Some might take offence at some of the images on display.

Bauer used disturbing and distorted images that left no prisoners. He was indiscriminating, wrote Weekly Mail Editor Anton Harber in the foreword of the Bauer collection, SA Flambé and other recipes for Disaster. “He will be tasteless, cruel, rude and obnoxious to left-wingers, right-wingers, middle of the roaders and probably even Mother Teresa,” he wrote.

To understand Bauer’s state of mind in the 1980s, look at the dishevelled, unflattering self-portrait near the entrance of the exhibition. 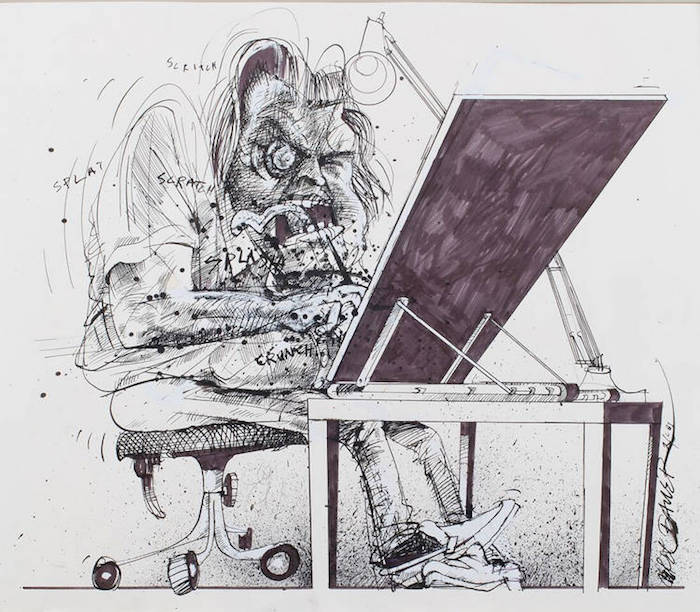 The Weekly Mail was among a plethora of alternative publications that emerged in the 1980s. These included South, New Nation, Vrye Weekblad, Grassroots, Saamstaan and even the cultural magazine, Vula, along with grassroots and student publications. These titles not only challenged the state, and paid a heavy price through banning and harassment, they also challenged mainstream media, shaking them out of complacency and often complicity.

In the 1980s – as it is now – the commercial press was fraught with contradiction. The drive by owners for profit – and thus of not rocking the status quo – was at loggerheads with efforts in the newsroom to deliver robust journalism. Bauer depicted this power play and conflicting interests in a caricature of then SAAN newspaper executive Stephen Mulholland, on display at the exhibition.

In some ways, these tensions are even more intense today in what is referred to globally as the post-truth era. Shrinking ad revenue, changing business models and greedy push-back by shareholders has seen relentless cutbacks in journalism resources. This impacts on our ability to report on the ground, because reporting costs money and takes time.

In this weakened state, swathes of the mainstream media have been captured, making a mockery of independent journalism and diluting the ability to speak truth to power in these newsrooms.

This in part has enabled a new generation of alternative media to spring up – mostly online. As was the case back then, many committed journalists in mainstream newsrooms continue to deliver some exceptional reporting. But a lot of vigorous digging – for example the unfolding #GuptaLeaks exposes – is often done by non-traditional investigative units such as the newly launched Scorpio, and amaBhungane, a donor-funded model of journalism which over the years has painstakingly been connecting the dots and exposing the rot on state abuse and corporate greed. Pioneering start-ups such as GroundUp, Health-E News, The Conversation, Daily Vox, AfricaCheck, RealPolitik and Daily Maverick punch above their weight in the English media landscape. Smaller speciality entities, such as Moira Levy’s Notes from the House, now cover the nooks and crannies of Parliament that mainstream media often neglects.

Courageous journalists, both in the mainstream and alternative media, are again at risk. The SABC 8, who exposed the rot under Hlaudi Motsoeneng, faced intimidation and threats. One of them, Suna Venter, paid the ultimate price. Thanks in part to their courage, the SABC is hopefully being freed from this grip – though public interest television is not guaranteed and requires vigilance. (Bauer’s images of the totally captured SABC back then have eerie relevance to today.)

Journalists exposing corruption face smears, threats and harassment. The SA National Editors Forum recently went to court to obtain an interdict to stop Black First Land First’s vicious campaign against journalists. This intimidation and the manufactured “fake news” dynamic peddled by the likes of Bell Pottinger are the new and very real threat to media freedom and truth-telling.

When it comes to state regulations, media freedom has been enshrined in our Constitution since democracy in 1994. However, as veteran journalist Joe Thloloe put it in an address at Daily Maverick’s The Gathering event in Cape Town last month, “the tinkering” has begun.

Twenty-three years into democracy, the liberation party is now the status quo. President Jacob Zuma’s ANC is increasingly hostile and crabby about “the media”, with the hand of the State Security ministry insidiously creeping into public affairs. The ANC persists in threatening the industry with the establishment of a medial appeals tribunal, and the so-called Secrecy Bill is just waiting for Zuma to sign it into law. There are worrying elements in other proposed legislation – i.e. certain sections of the Cybercrimes and Security Bill and the Prevention and Combating of Hate Crimes and Hate Speech Bill.

As was the case in Bauer’s heyday, the alternative media today is often aggressive, confrontational and unapologetic, standing in sharp contrast to tame and captured titles within the diverse media landscape.

The media’s challenges in South Africa are not isolated, but a global trend driven in part by huge technological disruptions. However, amaBhungane’s Sam Sole – in the keynote address to the Highway Africa conference this year – said South Africa was fortunate. “The heritage of the anti-apartheid media is one that is ethically aspirational: independent, political in the sense of having a commitment to its constitutional mandate, anti-establishment, sceptical, suspicious of authority and power.”

As in the 1980s, quality journalism – be it alternative or mainstream – needs the public’s support to not just survive but to flourish. My appeal to you: Do not cancel subscriptions to trustworthy publications. Take one out for a friend. Support online media crowd-funding initiatives. Don’t repost fake news. 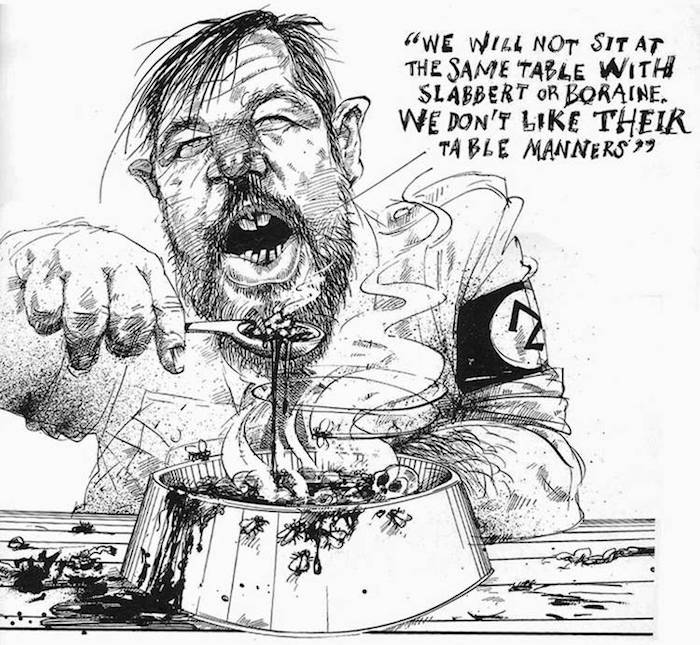 Nineteen eighty-five was a defining year. It marked the beginning of the end of apartheid. This year will surely be remembered as a year when South Africa said no to looting and state capture. Just as Derek Bauer left his ink-spattered mark on the 1980s, the role of the media – and cartoonists – in this public awakening cannot be underestimated.

We owe the rebellious Bauers and trouble-making Weekly Mails of that era a deep gratitude. They laid an honourable tradition of truth-telling and muck-racking during a time of tyranny. It is a tradition that we must continue to follow for the sake of our young democracy in which there lies so much hope and potential.

This is an edited version of the address that Janet Heard delivered for the opening of the Alternative Press – Work of Derek Bauer retrospective at the South African National Gallery in Cape Town last week. The exhibition of original works by Bauer, who died in a car accident in December 2001, also showcases contemporary cartoons by Zapiro and Brandan Reynolds. The exhibition runs until May 2018.