How Facebook is working on the revenue issue for publishers 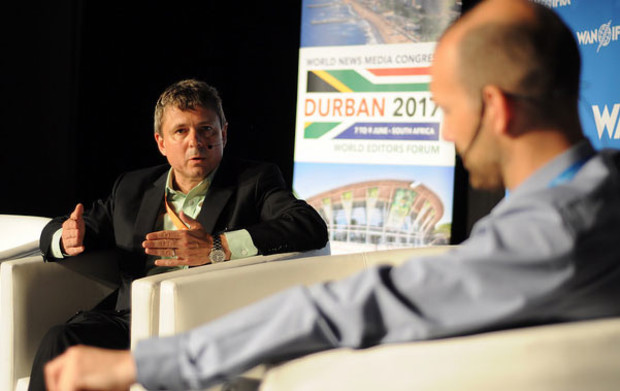 “It’s been a time of incredible change and challenge, from fake news to filter bubbles and debate about our place in the news ecosystem.”

That’s how Nick Wrenn, Facebook’s head of news partnerships for EMEA, summed up the last year or so for the company during his short presentation at this year’s World News Media Congress. The same could be said of the publishers in the room and around the world who continue to grapple with what type of relationship they should forge with Facebook.

Facebook’s Nick Wrenn sat down with WAN-IFRA’s Nick Tjaardstra, director of Global Advisory, for a Q&A session on revenue.

Essentially, Wrenn is tasked with resetting Facebook’s wobbly relationship status with publishers, i.e. from frenemy to friend, in Europe, the Middle East and Asia. Part of that message includes promises of righting some of the wrongs that the company, by their own admission, committed recently, as well as championing the initiatives it has launched.

Referring to all the challenges the company has faced in the last year, he said: “So all of this is new. No one’s done this before, certainly not to this scale. And in the past few months we have also encountered some other problems and challenges that we are determined to overcome.”

One much-published initiative has been the Facebook News Journalism Project, launched in January in the United States. One of the key pillars of that project is “to work more collaboratively with publishers to give them more value,” he said. Wrenn said that Facebook defines “value” in working with news publishers in three ways: 1) innovation, 2) monetisation, 3) and audience growth.

Here are some of the key issues addressed in that Q&A in Durban, edited for clarity and length.

Nick Tjaardstra: We just did a survey of publishers from different markets and asked them about the money they were earning from Facebook, and how they were working with Facebook. And we had this kind of headline figure: on average, 32% of their referral traffic was coming from Facebook, but it brought only a 7% share of their digital revenue. So, is that something you see changing? Is that something that you want to help publishers with?

Nick Wrenn: We absolutely want to address that. We know that if publishers don’t build or get value from Facebook, they will stop using Facebook. I think in the two and a half years that I’ve been doing this job, in the first year we were launching Instant Articles, we were making improvements to the app, and we were bringing in new surfaces like 360. A lot of the emphasis was on audience growth and engagement growth and reach growth. And I think in year two the conversation started to switch along the lines of, “Look, we know that you guys can deliver us big numbers. We need increased revenue.”

We take that feedback back to our product teams and our engineering teams, and that influences the road map. So, if you take an example like Instant Articles, we’ve made a number of changes over the past year as a direct response from the feedback that we got from news organisations – not only to make it a better user experience, but also more valuable.

For example, they told us that they wanted more ads. We started off having one ad every 500 words. We changed that to one every 350 and now it’s one every 250. We’ve increased the range of ads and the formats of ads. We’ve improved the design. And this week we’ve introduced the new ad units at the bottom in the related stories because that performed really well in testing.

It’s a constant process of iteration. We’re committed to helping news organizations get revenue across. Instant Articles is one, branded content is another, which a year and a half ago you couldn’t post branded content on Facebook. Those policies are out of date, so we changed them. And video is the third area that we’re really excited about the possibilities.

Where do you see that long-term? You’re talking about introducing mid-roll video? I suppose it’s a separate question about how people can get engaged with that programme. It’s quite a new programme. …

Wrenn: I think it depends entirely on the content that they have because, ultimately, the content has to be great. Otherwise, people won’t watch it and they won’t even reach the ad.

The commitment to quality journalism and quality content should come first. The mid-roll experience… We are just starting this in a small number of countries and a small number of news organizations. It’s an alpha test at the moment. And if we get it right, we’re going to scale it to everyone as soon as we can. It’s a mid-roll experience because we had pre-roll ads, if you can imagine, going through your newsfeed and every video having a pre-roll ad, it would be a terrible experience.

This is a mid-roll experience for videos that are 90 seconds or longer. And the video can be inserted after 20 seconds. So, the challenge here for news organisations who have great video content and want to build great video content is instead of just inserting an ad halfway through and hoping that people will sit through it is how can they innovate on new content formats where the video producers are putting the content together knowing there’s going to be an interruption sometime after 20 seconds.

So, that, again, we’ll lead to a change in how newsrooms are thinking about reaching new audiences. We instinctively feel people have found video on Facebook, you know, almost by chance as you scroll through your newsfeed. We feel that there’s an opportunity to test a new environment within Facebook where people will go to video with more intent and go looking for the brands and publishers that they really like and trust.

You had these sort of “poster children” for Instant Articles – the New York Times, The Guardian, but they’ve changed their strategy and attitude towards it. Who would you say now are the champions of Instant Articles, those who are doing a really good job with it and comfortable with the revenue they get from it?

Wrenn: Yeah, I think there are a number of organisations that have had a good experience with Instant Articles and some that haven’t. And that’s understandable. It probably isn’t a good fit for everyone. But we have public endorsement from people like Business Insider, public endorsement from people like Le Parisien. We’re working successfully with a couple of regional news groups in the UK, for example. So, there is a range of opportunities. And again, some publishers are interested in primarily getting a higher return financially than they do on their mobile web experience; others are looking to build new audiences.

The goals for going into Instant Articles can differ from publisher to publisher. We’ve had a couple of high profile withdrawals, which I certainly understand why those companies have done that. At the same time, we’ve now got more than 10,000 publishers on Instant Articles, which is up more than 25% just since the beginning of the year. And in terms of revenue through Audience Network, we’re paying out more than a million dollars a day on Instant Articles. And that has grown 50% in more than six months.

The adoption, the traffic, and the revenue are all going in the right direction. But like I say, it’s a good fit for some and not necessarily for everyone.

We heard from Richard Gingras talking about promoting AMP as the Google standard for mobile webpages and making them load faster. I understand that’s more integrated into Instant Articles. Can you explain what’s going on there, and how that’s working?

We just released an SDK, part of the developer’s toolkit, which enables them to publish once. And if they’re signed up to AMP and Apple News, it will publish once to all three platforms. So, we’re trying to cut the workload. And, again, we wouldn’t have been able do that, we wouldn’t have even known there was a demand for that had we not sat down and started having deeper dialogues with news organisations.

This is a burning question that everybody’s talking about: How can our trusted, quality news brands be more recognisable to our audiences on Facebook? What are you doing there?

Wrenn: Yeah, that’s a really good point. And it actually surprised me. We got some feedback from publishers saying that, citing some Reuters research saying that people, generally, when they saw a news article on Facebook remembered that they’d seen it on Facebook and can always remember who the brand was. That surprised me because I’m not one of them. I admit that am probably not typical.

We’ve been doing some work with about 10 publishers who’ve raised this issue specifically with us. We call it informally a news credibility group. How can we make sure that people know that they’ve read a New York Times article or a Guardian or Telegraph, whatever it may be?

I think that’s an engineering solution. And there’s also a branding solution. We’re doing some experimentation at the moment to improve the branding when you share an article, that that branding would stay with you when you share the article. Small iterations like this in association with the publishers giving us feedback – I think is the way forward in trying to solve some of these issues.

This story was first published by the World Editors Forum, WAN-IFRA, and is republished with permission.