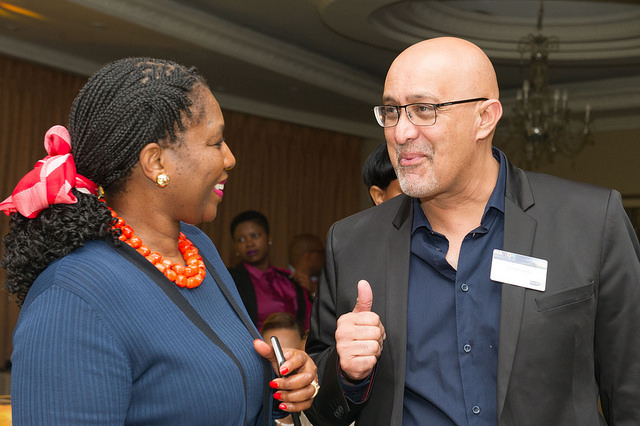 
The Nation Brand Forum is a strategic Brand South Africa platform through which the organisation endeavours to create an open space for engagement with stakeholders in government, business and civil society.

Input from stakeholders in terms of the capabilities to profile, the challenges to address, and creative input on how the organisation can best bring the Nation Brand to life is critical in terms of the strategy development and programme execution of the organisation. The reason for this is simple – this Nation Brand belongs to all South Africans.

As a developing nation in a rapidly changing global economic and geopolitical context, South Africa has to, on an ongoing basis, reflect on the strategic implications these changes have for the manner in which we market, profile and position the Nation Brand. Essentially we cannot assume that existing strategies will continue to deliver results.

This year, on the 27 October 2017, Oliver Tambo would have turned a 100 years old, a mere four years younger than the organisation that nurtured his bright ideas and revolutionary consciousness, the African National Congress. Oliver Tambo spent his entire life pursuing the dream of building solidarity between South Africa and the Global World.

It is both fitting and inspiring to recognise his role as the foremost brand architect of our new nation and country. The Brand of the South African Liberation is an enduring mark that continues to define the essence of who we are.

Our country is working tirelessly to consolidate its identity as a new nation formed on the bedrock of bitter sacrifices suffered by many, some of whom laid their lives so that this new nation could be born. That history and heritage define the essence of our Nation Brand which our counterparts in the developing world and elsewhere should embrace and understand. In addition to everything else, our Nation Brand is in many ways influenced by our heritage and culture.

The diverse cultural experiences we display to our visitors, the music and dance, the tales we relate, the art, the crafts are all the collective ingredients of our rich culture and heritage that must never ignored if our Nation Brand is to live up to its true identity.

These themes are based on the desire that propels everyone, both in the private and public sectors, to innovate and conjure up creative strategies that will help our Nation Brand to compete vigorously in the world of winning nations. Gifting the competitive nature and shifting sands of global relations, that journey will require courage, commitment and deep sacrifice from all of us.

We have to face the reality that we live in a world that is rapidly changing. The emergence of the fourth industrial revolution, global climate change, conflicts and refugee crises engulfing entire regions present humanity with several seemingly insurmountable challenges.

During the 20th century we were led to believe that globalisation is an open-ended inevitability. However, in the past few years since the global financial crisis, we have seen exactly the opposite happen. Yesteryear’s advocates of globalisation, international trade and business interaction are increasingly closing their borders in fits of economic nationalism and isolationism.

Among many other analyses of these phenomena, Business Monitor International (BMI) indicates that with the rise of populism, right wing movements in Western political jurisdictions, and phenomena such as the Brexit vote, globalisation may have reached a plateau, and that the process may be reversed in some respects.

As a developing nation, South Africa needs to be aware of these winds of change blowing over Western Europe and North America. It is for this reason that analysts indicate that since 2009, data indicates a slowdown of global trade not only as a result of the fall-out of the global financial crisis, but due to increasing protectionism in the so-called advanced/developed economies of the world.

This is why we call on you, our stakeholders, to assist Brand South Africa today to interrogate the manner in which the Nation Brand should explore and seek out new opportunities in emerging markets – seeing that they may become the drivers of global trade integration, and globalisation in the 21st century.

The BRICS nations have in a short time proven themselves to be willing, and able, to find solutions for developing nations. For example, the BRICS’s New Development Bank is an example of how developing nations are creating alternative platforms to promote and support internal development beyond Bretton Woods institutions in this post-Washington Consensus world. The Nation Brand’s marketing strategy has to keep up with these rapid developments, and this is why, once again, we ask our stakeholders to help us think through these challenges.

A well marketed and globally positioned Nation Brand can contribute to attract investment, aid with market entry strategy by increasing awareness of the country in international markets, while also bringing more tourists, students, and specialised skills to the country. Country development strategies that ultimately aim to build positive nation brands should be premised approaches that can help people to adapt their views and to acquire new knowledge and skills, and spread new social messages to large audiences.

In this sense, every nation is already a brand: it already exists in the minds of others as an entity with positive or negative attributes.

How a country is perceived, both domestically and from abroad, from the quality of its goods and services, to the attractiveness of its culture and its tourism and investment opportunities, to its politics, economic policies and foreign policy, helps both with internal national development as well as the successful integration into the world community, on all levels.

A nation brand is built through the country’s actions and behaviours by a range of actors and stakeholders working in concert and communicating a consistent message. An understanding and appreciation of the inter-relationship between all stakeholders and their interaction with the Nation Brand is very important in order to build the country’s reputation and shape perceptions.

By its very nature, country branding must be initiated and developed by national governments, and through Brand South Africa (a state owned entity that is mandated to develop and implement proactive and co-ordinated marketing, communication and reputation management strategies for South Africa) — we successfully hosted the inaugural Nation Brand Forum in August 2016.

Despite the recent negative results of the World Economic Forum Global Competitive Index Report, South Africa continues to be the top foreign direct investment destination in Sub-Saharan Africa and is ranked 25th globally on the 2017 A.T. Kearney investor confidence index. Our country ranks relatively high on the international metrics for innovation and competitiveness.

This is attributable to the generally positive business environment, good intellectual property framework, and a tradition of excellence in public research institutions, a history of manufacturing, and an ICT sector that, while small, has been able to adapt some global platforms and create innovative local applications.

As we collectively move forward with the implementation of the National Development Plan, we as leaders know that it is without a doubt that this vision will position us in good stead to have a positive national brand narrative.

It is incontestable, that there are major changes and greater emphasis on communications to be more widespread in contributing to the debate for the development of societies for improved nation brands.

The rapid advancement of globalisation means that every country, every region and every city must compete with each other for its share of the world’s consumers, tourists, investors, students, entrepreneurs, international sporting and cultural events.

Economic growth and development is crucial to the strength of a Nation Brand. If the economy grows, jobs are created, social levels improve. Foreign direct investments become a reality and the economy thrives. Therefore, it is unquestionable that socio-economic national development agendas have an incredible impact on the positive branding of the Nation Brand.

In conclusion, South Africa remains cognisant of the work that lies ahead to ensure that our country remains an attractive investment destination and competitive nation brand.

Guided by the NDP’s Vision 2030, we are committed to improving our global competitiveness and reputation with the view of delivering on our growth and development imperatives.

We are confident that your participation in the 2017 Nation Brand Forum will contribute positively to inspiring change through inclusive political and socio-economic reforms bound by shared-values of ensuring that South Africa’s growth and development is sustained.

This is an edited version of the speech given by communications minister Ayanda Dlodlo to the Nation Brand Forum.