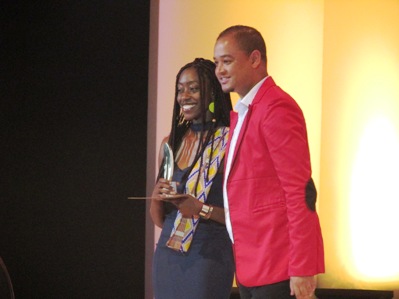 While this year’s Pendoring Awards honoured excellence in vernacular advertising, they weren’t blown away by the student entries; one judge described the student work he saw as lacking quality and depth. Sadly, this seemed to be an overall trend this year.

“The radio category as always was strong, the opportunity is to lift our game in other traditional categories, out of home, print and television,” Pepe Marais, chief innovation officer of Joe Public, commented. Radio had so many entries because of the low production costs of the medium as well as the trust that advertisers have in its effectiveness.

Marais described the digital category as “really shocking in terms of calibre of work and quantity of calibre of work”, surprising in a world and an industry that is increasingly moving to and relying on this medium.

Winner of the Overall Student Award, Taurai Valerie Mtake, who also took home a gold Pendoring in the Student Communication Design – Publication Design category, believes that students need to push more and refine their work to ensure good quality work is going out there.

“It’s more about getting guidance from as many people as you can and taking the good out of people that you interact with… don’t just rely on what you have at school. Do as much as you can outside of school, go beyond just being a student,” she advised.

Aldri van Jaarsveld, managing director of Black Khaki Advertising, the agency that walked away with a silver Pendoring in the Original Afrikaans category, stressed that Afrikaans is alive and well, despite the naysayers who spout that it is a dying language. For him, it’s about being true to your roots. “To develop a piece of communication that talks to people from all walks of life, not just developed in Cape Town for Cape Town, it’s something that resonates with the people,” he said.

“The manifesto advert is not new or unique,” said Van Jaarsveld. “Apple did it and a few other brands did it. But we haven’t seen an authentic, truly South African advert, which is a manifesto for the South Africa. A lot of brands have tried it but it wasn’t authentic as it lacked conviction in a lot of regards.”

The Pendoring judges did not mince their words when they spoke of their disappointment in the student entries. Marais believes there are several issues including a “brain drain among lecturers”, a problem with the quality of guidance at the top and a lack of clear conceptual thinking” in the students’ work.

A piece of work that was warmly received by attendees was done by 7Films and Y & R South Africa, which was done for the Western Cape government as an anti drunk driving campaign. It was honoured with a special Public Service Award on the night.

The other big winner on the night was The Odd Number, which walked away with several accolades, including the coveted Umpetha Award for its Hell’s Kitchen campaign for DStv.

Attendees at this year’s Pendoring Awards were kept entertained, not just by the awards, but also by the top quality musical acts such as DJ Arch Jnr (was he at the beginning because his bed time was soon?) who was accompanied by a dance crew from MO Dance Studio.

Here are some photos from the Awards:

To see all the live tweets that were posted during the awards, follow Michael Bratt on Twitter @MichaelBratt8 and check his timeline.