LATEST NEWS
Home News Cyril Ramaphosa and the media: Will he modernise the ANC’s relationship with the press?

Cyril Ramaphosa and the media: Will he modernise the ANC’s relationship with the press? 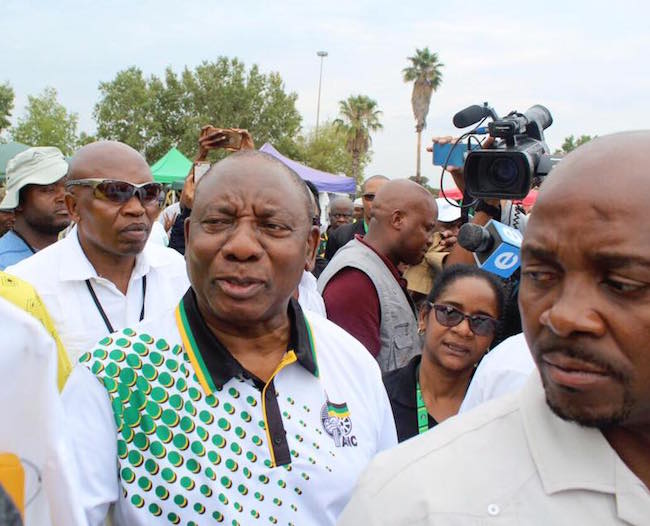 The media can breathe a collective sigh of relief after Cyril Ramaphosa won the position of president of the ANC . His rival for the job, Nkosazana Dlamini-Zuma, is renowned for her hostility to the media – although many would say the media was hostile towards her.

ANC member Andile Lungisa, writing in the Daily Maverick, said, “The white mainstream media have smeared Dlamini Zuma and have unforgivably robbed her of her own historic-political agency”. Others see it differently. Stephen Grootes, in a piece published on EWN’s, said NDZ had not spoken to any independent media outlets “unless one believes Mzwanele Manyi’s The New Age/ANN7 is an independent outfit”.

But Ramaphosa clearly understands how to work with the media.

Flashing his broad smile and acknowledging members of the media by name, Ramaphosa cuts a friendly demeanour when dealing with the media. He also comes across as more transparent and establishes a personal rapport with people, something eNCA Africa editor Mike Siluma describes as “operating almost the way Nelson Mandela operated”.

Professor Glenda Daniels, associate professor of media studies at Wits University, believes Ramaphosa “understands the role of the media in a robust democracy extremely well” and describes his relationship with the fourth estate as “cordial and sometimes friendly”.

Ramaphosa made his position on the media clear during a talk he gave at a South African National Editors Forum (Sanef) Nat Nakasa Awards dinner in June 2014. “He articulated well that an imposition of a Media Appeals Tribunal and any other restriction on the media would have negative impacts on the kind of society that we wanted to build,” Daniels explains. “In fact he thanked the media for the in-depth investigations which shone light on corruption – which ultimately has a negative effect on the poor.”

Anton Harber, adjunct professor of journalism at Wits University, agrees with Daniels. “Ramaphosa is a private man who keeps a lot to himself, but is relaxed and engaged with the media. He has a better understanding than most, having been chair of a media company (Johnnic, one time owner of the Sunday Times), and a long working relationship with a wide range of media. I think there is reason to hope that he will modernise the ANC’s relationship with the media.”

Arguably, Ramaphosa’s biggest media obstacle was the period when coverage centred on his role in the Marikana massacre in which 34 striking mineworkers were killed by police. While the coverage was widespread, and despite all the criticism he received, Ramaphosa never once criticised the media back.

Dr Musawenkosi Ndlovu, associate professor in the centre for film and media studies at the University of Cape Town, has a very different view, explaining that the mainstream news media treats Ramaphosa comparatively softly. He believes there are several reasons for this including:

But Ndlovu warns that Ramaphosa’s cordial relationship with media could sour, depending on how he positions himself in relation to some of powerful media’s world view. “For now mainstream news media is happy because Cyril has been constructed largely as saviour,” adds Ndlovu.

Dlamini-Zuma out of touch with the media

During the run-up campaign to the conference, Dlamini-Zuma snubbed critical media and talked only to those she considered friendly, Harber points out. “This is a terrible precedent … Journalism wants a president who is comfortable enough with themselves to engage in a lively, critical, sometimes even adversarial relationship with the media, and does not keep a nervous distance from reporters. Journalism wants a president who recognises the role of the media in a democracy and does not treat hard-questioning reporters as an enemy.”

Daniels has a very unflattering view of Dlamini-Zuma and her approach to media. “She is off the mark, or ‘unlit’, and ‘unwoke’ to use the latest trendy lingo. She is just uninspiring and tired. I can see her wagging her finger at the media”.

She cites a talk Dlamini-Zuma did in October 2016 at a Sanef Media Freedom Day/Black Wednesday event. “She spoke for an hour about poverty in Africa, and agriculture – and not once did she address the event’s issue … It was as though she replayed the same speech she had made many other times to many other disparate audiences – to an event which was a 20 year anniversary of Sanef, and an event which commemorated Black Wednesday when newspapers were banned and editors were arrested. She said nothing in support of media freedom and nothing about the kind of contribution journalists were making to hold power to account.”

The people who were advising her, were the biggest reason for Dlamini-Zuma’s media approach during the campaign, Siluma believes. He cites previous engagements with her when he was a reporter (when she was the minister of health in Mandela’s government) where she was quite open and communicative.

“During this campaign she was almost insulated from the media, talking to only a select few like ANN7… She was in a camp where most of the people who were supporting her come from a view that the media in South Africa is hostile to Jacob Zuma and his programmes and she is supported by people who support Zuma and his programmes. Those who advised her would have had a lot to do with how she approached the media,” Siluma explains.

What to watch out for with Ramaphosa

The new ANC president enters an environment where there are many media issues to be addressed. Harber points out the key factors as whether he:

– calls the State Security Agency off the media

Siluma cautions that just because Ramaphosa won, it doesn’t automatically mean the ANC’s relationship with the media will improve. This is because of the mixed top six that were voted in, some of whom are Dlamini-Zuma allies who are anti-media.

“The mouthpiece of the ANC is the secretary general, not the President. The deputy president David Mabuza is not a very communicative person, Jessie Duarte is not exactly a great friend of the media. It will depend on Ramaphosa’s input and whether he can assist in creating a similar culture of what was there under Mantashe,” Siluma says. 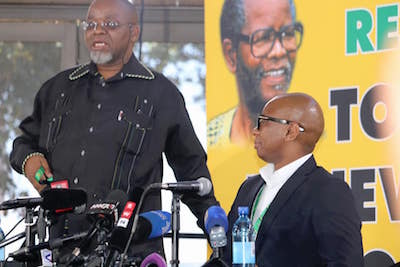 The media can only hope that Ramaphosa solidifies the open relationship with the press, unlike President Jacob Zuma, who used his outgoing address to lambast media, calling it an active participant, with vested interests, rather than impartial observers of the ANC. “The mobilisation of the media against the ANC and the country, from Johannesburg to London to Washington DC, has gained momentum in recent months. We need to reflect on how to communicate with our people, in a climate where forces hostile to our organisation control the means,” he said. Zuma also slammed ANC members who had “actively used the media to fight personal battles against the ANC”, damaging the party in the process.

How the media was treated at #ANC54

The ANC’s often-fractious relationship with the media was shown in stark relief at the party’s 54th National Elective Conference. The press, numbered in their thousands, were kept penned behind high wire wire fences patrolled by security. Daily Maverick photojournalist, Greg Nicolson, described it as an “isolation plan”.

“Accredited journalists have been vetted by State Security and are checked by SAPS when they enter the conference. With the exception of open plenary sessions, they are corralled into the media lounge because the party is paranoid about journalists speaking to delegates and accessing information under private discussion. This is despite security being placed at the entrance to the plenaries,” he wrote.

Nicolson describes a situation in which the ANC’s communications team tried to be accommodating, but how Zuma’s notorious state security team imposed limits based on the “unpredictability of instructions from their political heads” which led “to ludicrous and abusive situations”.

Bloomberg journalist Sam Mkokeli, had his accreditation revoked after he argued with a security official about journalists having to wait for over an hour for a walkabout by Ramaphosa when he wasn’t ready to address media. Following this incident‚ a number of journalists came forward and revealed how they have been abused by security to a point of being threatened and chased out of the venue and also having their accreditation revoked,” TimesLIVE reported.

Here's a video of my ejection from Nasrec. //t.co/vgToU1Bm48

Newly elected chairman of the ANC, and former secretary general, Gwede Mantashe, warned that the party was going to ensure Nasrec was plugged for leaks and “would not allow journalists and delegates to interact about the developments inside closed sessions”, Times LIVE said.

The security clampdown at Nasrec has undermined journalists throughout #Anc54 and undermined the public's right to know. But ejection of Sam Mkokeli is an extreme outrage! Will @DPRamaphosa do anything to address this? //t.co/F8ddYwZNbh

eNCA reported on Wednesday morning that some women journalists had had their breasts groped during the so-called security clampdown. ‪”The ANC has requested journalists who have been ill-treated to report all incidents as soon as they happen so that they can attend to them. The ANC has also pledged to investigate today’s matter and speak to security about incidents of inappropriate behaviour and touching by marshals,” said Sanef chairperson, Mahlatse Mahlase. She said the ANC had apologised for the events on Tuesday.

Image: Cyril Ramaphosa on a walkabout after he was elected president of the ANC / ANC Facebook