The downs and ups of radio 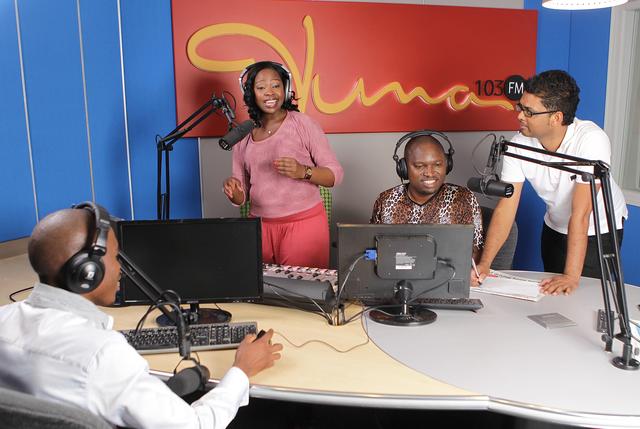 The Broadcast Research Council of South Africa (BRC) rewards those people who attend the release presentations of the Radio Audience Measurement (RAM) results with a handy electronic station dashboard, which TNS developed.

This trends broad individual station performance over the past week and average day (both Mon-Sun and Mon-Fri), as well as providing the latest picture of each station’s demographic profile and average quarter hour listenership through the day.

The April – September 2017 results were released last week. Given the talent turmoil in the radio world, these results were bound to make interesting reading. Looking at my handy dashboard, I realised that the four period graphs can lure one into leaping into assumptions about the stations’ health, without pausing to consider whether one is actually seeing ‘significant differences’. The BRC provides a calculator on its website to enable one to test whether a station’s audience has truly increased or decreased, and reminds one that one can only test significance between two independent samples i.e. the periods in review cannot share a rolling three months. Deciding to be meticulous, I carried out this exercise before consigning stations to winners and losers lists.

Having worked through this process, comparing this latest period (April – Sept 2017) with Oct 2016 – March 2017, I found that of the 35 commercial and PBS stations I tested, 57% did not show any significant change, 29% exhibited a downward trend and 14% displayed significant upward movement.

(It struck me that it would be most useful if TNS could refine the dashboard, so that significant differences were automatically highlighted, although the fact that there are varying source periods that can be examined might complicate the task.)

It is disturbing to note that six of the SABC’s African Language stations have made this list. They have the inherent advantage of talking to listeners in their home languages, and enjoy sizable footprints, and the responsibility of nation and cohesion building. Logic also suggests that these stations should not have been unduly affected by the Hlaudi Motsoeneng’s local content diktat. 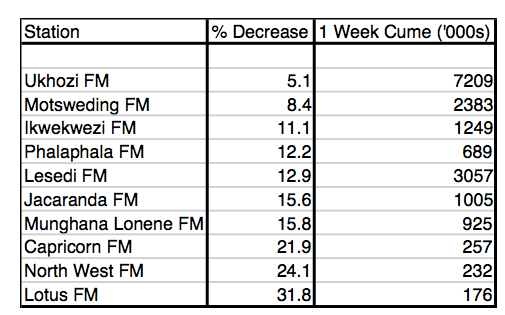 There has been much publicity around two of the stations with losses. From my encounters with Jacaranda FM listeners, as well as from the press reports, I was aware that there was much consternation around Rian van Heerden’s initially postponed departure from the Complimentary Breakfast Show. Although he has returned to the afternoon Scenic Drive, the importance of breakfast shows in drawing in audiences for the day can not be underestimated. And Martin Bester and Tumi Morake have proved to be controversial substitutes in the morning slot. There have been other line-up changes as well, with Kriya Gangiah taking the Monday to Friday 7pm and 10pm slot and and Mmasea Petje between 4am and 6am.

Capricorn FM celebrated its 10th anniversary with an overhaul with included new show names as well as new presenters. These do not seem to have been met with much enthusiasm by its listeners. Lotus FM is the biggest loser in percentage terms, having shed close to a third of its audience. There has been no shortage of press coverage detailing the station’s many travails: Motsoeneng’s local content policy certainly dealt the station a body blow, there have been high profile departures, stories of management and staff warfare, and lurid tales corruption and sexual favours traded for positions.

On a cheerier note, the following stations, delivered audience increases:

Kaya FM, has seen a radical shake-up in programming, with David O’Sullivan replacing Bob Mabena, who defected to the MSG Afrika Group. Among other changes, Bridget Masinga moved to the late morning show, Gugulethu Cele took over Kaya Bizz. The Friday and weekend line-ups were also overhauled. Whilst all these changes may have rattled conservative listeners, it seems that Kaya’s Afropolitan audience thrives on change and new discoveries.

Perhaps the biggest surprise of the RAM report was the huge leap taken by KZN station, Vuma. I asked Rivak Bunce, ‘chief mission controller of United Stations, to help me understand what drove this phenomenal performance. He explained that the new station MD, Pearl Sokhulu, who joined in September 2016 and implemented a new programming policy, focused on what she saw was a unique gap in the market for an upper end, mature black listenership that was not being served. Music and programming are now designed to appeal to a very specific epicentre – a 37-year-old black female. It is to this woman that the presenters are encouraged to visualise, entertaining and informing on the other end of the microphone. All music, features and content are now routinely researched against this audience.

This latest RAM report certainly shows us that radio audiences are dynamic, and suggests that there is a lot of hard work ahead for broadcasters if they wish to maintain healthy audiences. Clearly change is not inherently bad, but broadcasters need to be deeply in touch with their listeners, before they implement it.