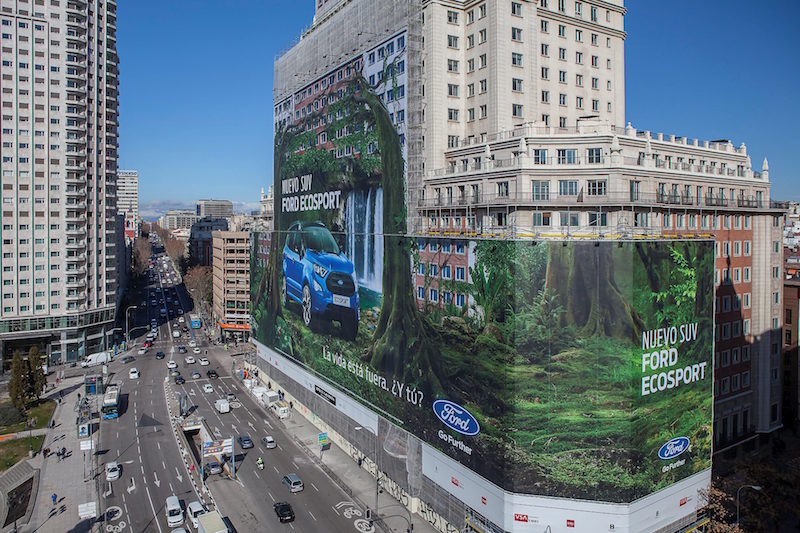 We couldn’t resist these two examples of brilliant billboard creativity. Firstly, Ford’s 2 000 kilogram, 5 265 m2 installation in Madrid, Spain has snatched the title of the world largest billboard. It has been verified by Guinness World Records, beating the last record holder by 241.93 m2.

“Our Guinness World Records  title for the largest billboard demonstrates the creativity that drives our company,” said Elena Burguete, director of marketing R Ford Spain. “Ford’s message is ‘Go Further’, and that’s what we aimed to do with our campaign for the launch of the new EcoSport. It’s a great way to deliver the message ‘Life is out there, are you?’ to as many people as possible, right in the heart of Madrid.”

The billboard remained in place until the end of February, after which it was donated to the Apascovi Foundation employment centre for people with disabilities, where a second life will be given to all of the materials used.

Strongbow took a dilapidated bus stop in Johannesburg and turned it into a natural oasis. The bus stop was covered in living plants which blocked out the sounds of the city and offered shade from the sun. The sound of birdsong played from tiny hidden speakers and a gentle, cooling mist was released as people sat down to offset the summer heat. “Strongbow is a natural cider,” explains Martine Erkamp, senior brand manager at Heineken South Africa. “We believe nature is the most refreshing thing in the world, and we want to communicate that ethos by refreshing the world’s cities with nature whenever we get the chance.”

This project comes in the wake of Strongbow’s ‘Butterfly Effect’ activation where 8000 biodegradable paper butterflies were dropped from the sky above Braamfontein to refresh the people below. The butterflies were embedded with indigenous seeds to bring nature back into the city.

Strongbow also created the “Inner City Waterfall” in Cape Town – a huge kinetic sculpture in the heart of the city centre that embodied the movement of a waterfall, released refreshing sprays of mist and would light up with shimmering lights every time people tweeted at Strongbow.