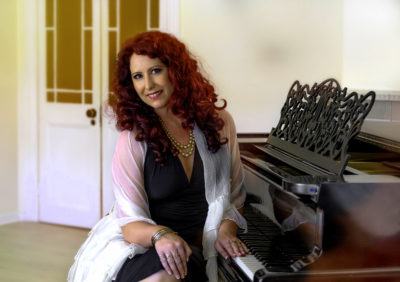 When musician Chantal decided to switch industries, many thought that it was career suicide but her passion for music has already seen her release a debut album and she is setting her sights abroad.

Having spent 20 years running her own corporate training company, Chantal decided to go back to her musical roots. “I enjoyed what I did, but I always felt that there was something missing. I couldn’t image myself doing it for the rest of my life,” she explains.

Chantal’s husband believed in her talent which made the move less daunting. “Music has always been a large part of my life as I’ve been performing with various bands. Eventually I decided to launch my solo career.”

While music is now her first priority, she still gets the odd client to whom she consults, but the thought of one forfeiting a steady cash flow to go out and look for gigs is something else entirely.

“It’s always a challenge, but I’m very lucky that I have the support of my husband. Being the new kid on the block and a solo performer, there’s a lot of people who don’t know what I do. So it’s trying to create awareness at the moment,” she says. “As we speak I’m trying to get venues, booking dates with places all over the Western Cape to set up a tour to promote my new CD, which released in May.”

Chantal describes her music as pop in the genre of adult contemporary. “I have my own way of expressing myself as an artist in terms of the music I create, unlike some artists.”

She writes and sings her own lyrics, and the music is a window into how she interprets life and the things she’s witnessed in the world.

Challenges along the way

Switching careers is a challenge in itself, but other difficulties emerge while on the journey of doing what you love. “My biggest challenge thus far is the awareness, people hearing my music and getting the necessary platforms to expose it. I would like to get up to Johannesburg at some stage and come down the east coast, I’ll get up there towards the end of year next,” Chantal explains.

She is also trying to put together an overseas tour, which is in the works, particularly in the UK and New York for 2019.

In the two years Chantal has been a performer, she recalls some of her stand out moments. “It took me a while to develop my own sound and in the process I’ve been fortunate enough to work with some great mentors who helped me find who I was as an artist. So working with these individuals has been very inspirational and brought some joy into what I’ve been trying to create.”

At times, you find that people are more critical than supportive when you share your ideas with them, so it is important that you don’t always take what they say to heart, emphasises Chantal. She adds it’s important to believe in oneself when making life changing decisions.

“I’m sure that there were a lot of people who thought I’d lost my mind when I said I want to leave my job to sing for a living. I would advise people to ignore the naysayers and to believe in themselves as well as believe in what they have to offer. Embrace the fear and do it anyway, disappointments are always there but don’t give up, just keep going.”

Self-belief played an integral part in her successful move into music. “Since I made this decision, I’ve never had any doubts that would force me to go back to what I did before.

“Once in a blue moon, there are the odd companies who approach me to do some training for them so I’m not completely out of that business, but I would never fully go back to it, the music is who I am. The music allows me to be more authentic as a person because I’m able to express myself through the music”.

Current state of the music industry

The songstress has never been signed to a major label so she only has an outsider’s opinion on the industry. “I’m an independent artist and I suppose I’m a bit wary of record labels. I like being independent because I have full control of my music and the message I’m putting across.

Overall artists are happy, but I’ve seen cases where artists have been told to conform in a certain way and put out music that fits with their image. I have a company that I’ve worked with that handles the distribution of my CD in the 600 online music stores worldwide, and I bring physical copies to my shows that are for sale.”

With a proactive approach to her music, Chantal’s already planning to work on her new album. “I’ve written some new material that I’ll be recording in November, the idea is to record some stuff for my second album due to be released in 2020.”