Obama pays tribute to Mandela, invites the world to find its better angels 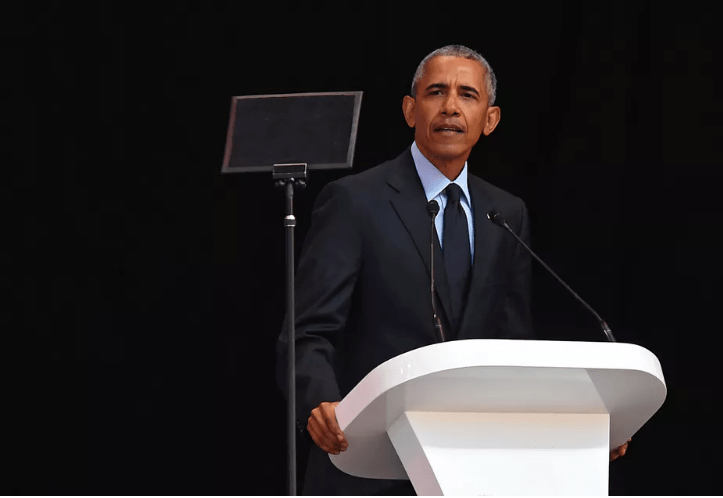 
The world is celebrating the memory and legacy of one of Africa’s most illustrious leaders, Nelson Rolihlahla Mandela. This year is special because it’s the centenary celebration of his birth. His leadership was important in reprioritising humanity and dignity by emphasising forgiveness and reconciliation, the protection of human rights, respect for all, and equal opportunity. Thabo Leshilo asked Cheryl Hendricks and Keith Gottschalk to reflect on Barack Obama’s speech commemorating Mandela’s legacy.

Did Obama strike the right chord?

Cheryl Hendricks: Obama was chosen to give this important lecture because he represented a great deal of what Mandela stood for. And because he provided hope and inspiration for a better world during his tenure as president.

His lecture struck the right chord. It was a forceful reminder of how far humanity has come over the past century – as well as the world’s current tensions and uncertainties. It was also a reminder of how we need to keep the hope and spirit alive of a world in which social justice and democracy can prevail. A world in which tolerance, inclusivity and the pursuit of a common good is the norm.

Mandela was a humble, visionary, leader of international stature seeking to bridge the divides between the North and the South to promote a common humanity, to reinvigorate multilateralism, to fight inequality and provide a moral compass for the world.

His ideas about attaining peace in Africa through negotiations and mediation and creating more inclusive societies is one that still shapes conflict management on the continent. In South Africa his contribution remains his vision of a united, non-racial, non-sexist, democratic society that eschewed tribalism and patronage politics, and that promoted collective and servant leadership. He was a unifier in a deeply racially divided society.

But the last decade has seen a shift from Mandela’s vision – globally, continentally and nationally. Globally, multilateralism is under threat by rogue states, “America first” forms of engagement with its stress on national interests, and the return to militarised solutions for resolving conflicts.

For its part, the continent has lost its way in implementing the ideals of pan-Africanism. Today it’s more constrained by narrow nationalist and authoritarian politics, and by high levels of poverty and inequality.

Mandela’s legacy was probably under the most threat in South Africa itself where we had deviated substantively from integrity, humility, non-racialism, participation, eradicating inequality and empowering all.

Obama’s speech was powerful because it drew on all these themes.

Keith Gottschalk: Speaking for nearly two hours, Obama set current world events against the arc of history. His speech made a fitting centennial address for Madiba, and went down well with the frequently applauding crowd of 15 000.

What are the three most important things to take away from the speech?

Cheryl Hendricks: His key points were firstly that we are at a crossroads. What we have built and achieved over the last 100 years is being contested by those who espouse the politics of fear and resentment, fuelled by the contradictions of globalisation, failures of governance and political elites that have assumed a monopoly of power. This is manifested in xenophobia, terrorism, chauvinism, narrow nationalism, gender inequality, economic greed and authoritarianism.

It’s in direct opposition to the values, ideals and principles embodied by Madiba and the many who fought for democracy and freedom. It is uncertain which one will win. But that we need to resist the cynicism, the divisions, hatred, corruption and be guided by universal principals, love, and servant collective leadership.

Thirdly, democracy is still the best vehicle to achieve social justice. But it needs to be about more than just holding elections. It must be part of civic culture, and driven by young people who are passionate about building a new society.

Obama’s message is a timely one for South Africa and the world as they struggle with the complexities and contradictions of globalisation and the retreat into the politics reminiscent of an unequal authoritarian past.

He reminded us of our own duties and responsibilities to protect our democratic gains, and to continue the quest for a just, free world where all can enjoy dignity. That we are bound together, interdependent, and therefore have a common destiny. This fact should shape how we interact with one another. It’s about promoting active citizenship and the transformation of global governance institutions.

Keith Gottschalk: First, Obama pointed out that the first two decades of the 21st Century saw the world freer, healthier and wealthier than ever before. Globalisation lifted one billion people out of poverty. Violators of human rights feel on the defensive. We have reduced the prospects of war.

But he also pointed out that the previous structures of oppression and exploitation were never fully dislodged. Racial discrimination can still be found – in the US as well as South Africa.

Unlike those who predicted the triumph of liberal democracy, there are contesting narratives pitting race, ethnicity, tribalism, nationalism, or religion against not only the West, but against modernity.

We have to address the fears of those who feel left out or left behind by globalisation. We must work harder and smarter to realise Madiba’s vision for freedom.

Strong men politicians are on the ascendancy, hiding behind façade of elections, while harassing their opponents and the media.

And we have to believe in the facts. Some politicians now make stuff up, and when caught out lying show no sense of shame.

Second, unlike some free market fundamentalists, Obama more than once made the point that if we want to work for freedom, we have to fight inequality. Where you have extreme economic inequality, the wealthy elite will have wildly disproportionate political influence. We need to keep protesting and keep resisting. We need inclusive education, collective bargaining rights, and to break up monopolies. You must worry about economics if you want to get democracy to work.

Third, the struggle for basic freedoms and justice is never truly finished. Human rights require us to recognise the humanity in all persons. These are not western ideals but universal ideals. Schools should teach not blind obedience, but critical thinking.

Democracy is about more than just elections. It means listening to opposing views, not only the ones you agree with. It means working with your enemies, so they become your partners.

Ultimately, right makes might. Madiba is an example of the politics of resilience and hope; never give in to cynicism. We need a collective spirit – young people are hope carriers. Keep believing in the vision; keep marching; keep building; raise your voice.