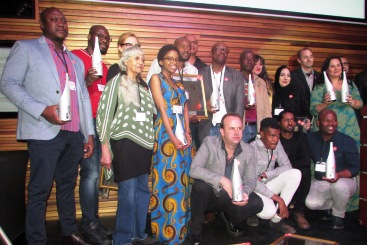 Bongani Fuzile of Daily Dispatch was named the Standard Bank Sikuvile Journalist of the Year at a glittering function on Thursday evening, 13 September, at the Johannesburg World Trade Centre (known as The Venue Greenpark).

All the winners received R15,000, a trophy and a certiﬁcate while all finalists received certiﬁcates. Commendation Certiﬁcates are awarded at the judges’ discretion.

Also awarded on the night were the Frewin, McCall and, Joel Mervis Awards. These recognise newspaper excellence in advertising, printing and production, layout and typography as well as the balanced use of pictures and graphics.

The Frewin Award, which recognises urban daily newspapers with a circulation above 40 000, went to Die Burger with Beeld the runner-up. A Commended went to the Daily Sun.

Mail and Guardian was awarded the McCall Award, which honours urban daily newspapers with a circulation of 40 000 or less. The Witness was the runner-up and Pretoria News took a Commended.

The Joel Mervis Award recognises urban weekly newspapers irrespective of their circulation and a joint award went to Rapport and City Press. Runner-up is Naweek Beeld with Sunday Sun taking a Commended.

Here are all the winners: