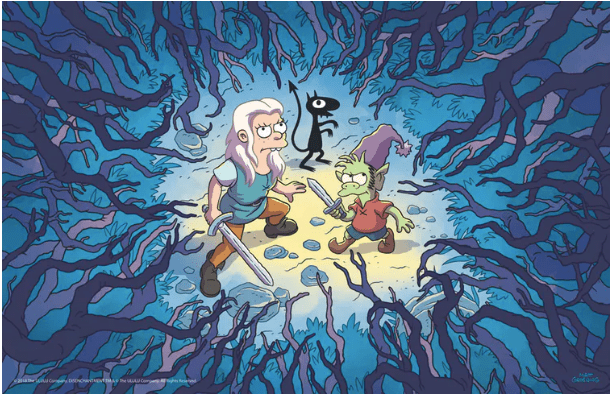 
As creator of The Simpsons, Matt Groening is the man behind one of the most popular television shows of all time. So there was always going to be plenty of interest in his latest offering, Disenchantment.

When I visited the San Diego Comic Con in July 2018, buildings in city were “wrapped” in promotional graphics to advertise the series which was about to launch on Netflix. There was a panel event at the conference, featuring Groening himself, most of the creative team and some of the voice talent. Anticipation and hype were high. So does it live up to expectations?

The 10 episode series kicks off with a two-parter, which sets the tone for the rest of the run. Interestingly, there is much more of a story arc running across the series than in Groening’s previous shows (The Simpsons and Futurama), so even though there are stand alone episodes, there is a bigger story running through the entire season (which is even slyly referred to in one of the latter episodes).

The setting for the show is Dreamland, a medieval kingdom ruled over by King Zøg, a character brilliantly performed by John DiMaggio. But the main focus is on the king’s wayward daughter, Princess Tiabeanie or ‘Bean’, Luci her demonic (or is it catlike?) sidekick, and Elfo, a rather literally named elf from the sickly sweet Elfwood. The kingdom of Dreamland is littered with visual gags and inside jokes (known as Easter eggs) which require your attention (particularly in the “ye olde” signage).

The characters are set up very quickly in the season opener, and the three main protagonists quickly bond, making you feel like you have been already been watching them for a few seasons. Bean is a privileged tearaway drifter, who likes a drink – but as with most of Groening’s lead characters, you just can’t help siding with her.

Luci’s wisecracking one-liners make him feel more like a Seth Macfarlane (creator of Family Guy) character, in voice and actions – but this is no bad thing. Meanwhile, Elfo is the heart of the show – cute, but also the comedy relief. He ends up on the receiving end of some questionable experiments to harness his magical “elf blood” as King Zøg strives to find the elixir of life, one of the overriding plot points of the first season. The gags are not as quickfire as in The Simpsons or Futurama, but this actually gives the plot room to breathe.

As with Groening’s other work, there is a strong support cast. There is Bunty, the loyal but dim maid, Sorcerio (played by Futurama’s Billy West) the rather useless wizard, and Odval, the sinister (and Game of Thrones-inspired) three-eyed prime minister of Dreamland. The show also makes use of stellar British character actors and voice talent such as Matt Berry, Noel Fielding and Sharon Horgan.

The surprisingly dark and adult themes show a marked departure from Groening’s other mainstream work – there is some very graphic violence and even the occasional swearing. It is possible that a lack of interference from a TV network has freed up the creators in this respect.

The more adult style is carried through to the visuals. The distinctive Groening look is still in evidence, but the colour pallets and the backgrounds are much more muted. The backdrops in particular, have a much more brush-like feel to them, and do not utilise the linear line weight and flat colours of The Simpsons. These elements give the show a much more traditional feel, even though the production is obviously aided by computer generated graphics, which are as seamlessly integrated as they can be, particularly in the establishing shots of Dreamland itself.

So is it any good? For me, the series benefits from the shorter season run associated with Netflix shows. This means the quality of the show stays high across the full run – there is no filler. It also helps that this series is more episodic than Groening’s other shows, rewarding the viewer who sticks with the entire run.

The use of cliffhangers (literally, in episode one) and run-ons from previous episodes give a greater sense of continuity, even if it sometimes means the loss of the quickfire gags. Despite this, Disenchantment is still at times laugh-out-loud funny and the writers know how to pull off a twist or two. Special note should be made of the great stylised title sequences, which give you a flavour of the forthcoming episode.

This is a series which is well worth watching and sticking with. And there is more to come. Netflix commissioned a 20-episode run, so hopefully it won’t be too long before the next 10 episodes become available, picking up from where it left off. And on the evidence of the first half, three decades after he created America’s best known family, Groening has not lost his magic touch.