Nike, Colin Kaepernick and the pitfalls of ‘woke’ corporate branding 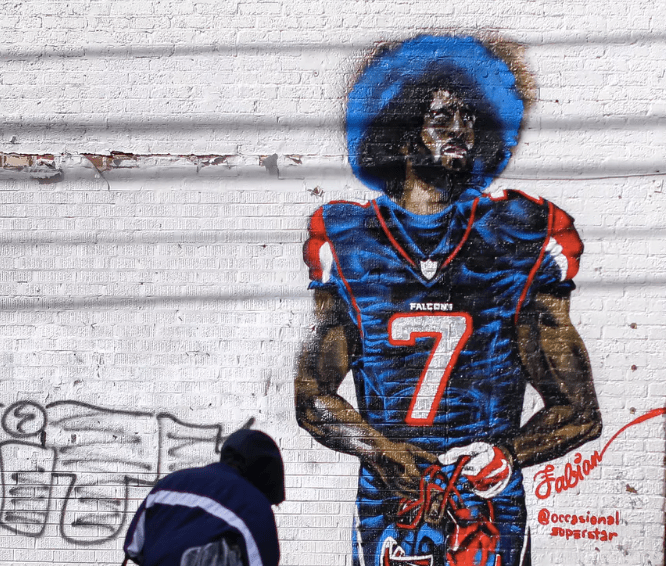 
Nike reignited a culture war recently by revealing Colin Kaepernick as their spokesperson for the 30th anniversary ‘Just Do It’ campaign.

The sportswear brand’s announcement came via a new advert in which young African Americans, Muslim women, physically impaired athletes and white skateboarders all encourage the viewer to follow their dreams, no matter how crazy.

Nike is clearly taking advantage of hot-button social issues to promote their brand, but commercialising human rights is tricky territory. Can a global brand like Nike really support a cause without co-opting it? And is the company prepared to face scrutiny over its own ethical record?

Dozens of fellow NFL players, of all backgrounds and heritages, followed suit and the protest soon included players from every team in the league. The backlash was swift and severe, with conservative pundits, veterans and president Donald Trump decrying the protests as disrespectful to the American flag and military.

The latest salvo in the debate was launched by Kaepernick’s narration of the advert, prompting a social media hashtag urging people to “#BurnYourNikes”. Some observers in the US seemed to think that Nike had gone too far, while the company’s share price and brand approval ratings fell, at least, in the short-term.

Nike’s skeletons in the closet

Kaepernick’s role as a Nike brand ambassador may seem like political theatre, intended to antagonise Donald Trump and his supporters. However, the reality is much more vapid.

This is smart business. The ad is clearly targeted at Nike’s most important customers: young, urban consumers whose views are supposed to resonate with the advert’s apparent homage to diversity and social justice.

The brand made a strategic commitment to equality several years ago, which has seen it become a visible advocate for equality and civil rights. Nike has been trying to reposition itself since then as a socially conscious sportswear brand, to escape its ties with Lance Armstrong, Oscar Pistorius and Michael Vick.

But the company suffered an own-goal this spring, when a New York Times investigation revealed complaints from 50 current and former employees about Nike’s “boys’ club” culture of sexual harassment and gender pay disparities. The allegations led to several high profile departures from Nike headquarters in Oregon, but it didn’t end there.

In August, four female executives filed a class-action lawsuit against the company for gender discrimination. In the #Metoo era, Nike has, once again, found itself on the wrong side of the debate.

It’s no wonder then that some commentators have become uncomfortable with Nike’s foray into politics, arguing that it’s a cynical ploy to hijack social movements in order to sell shoes. Causes and campaigns can be big business for sportswear companies and may even do some good – just look at Adidas’ training shoes made from ocean waste.

Yet Nike’s support for Kaepernick’s protest, given its origins in opposing racial profiling and violence by the police, raises questions which detract from the lustre of the brand’s apparently noble stance.

Part of the problem lies in Nike’s use of imagery, words and stories that lie well beyond the reach of sport. The tag-line of the campaign, “Believe in something, even if it means sacrificing everything”, sounds like a call to political action.

It’s the kind of soaring rhetoric you might expect to hear at a Black Lives Matter rally or the Women’s March on Washington. It’s certainly a far cry from the banter between Michael Jordan and Spike Lee from the original Just Do It adverts three decades ago.

By exploiting injustice for commercial purposes, Nike may be undermining or demeaning the causes it declares to support. All of this begs the question of what relation social justice and equality bears to training shoes anyway.

Nike’s choice of Kaepernick to front the latest ad campaign commercialises issues such as racism, Islamophobia and human rights violations. Their framing of these problems beneath one catchy slogan seems to imply that there is equivalence between the experiences of kneeling NFL players, Muslim women wearing hijabs in a boxing gym, people overcoming cancer and urban white male skateboarders.

It’s all further complicated by Nike’s own internal ethical struggles. Nevertheless, despite the knee-jerk reaction among shoe burning ex-customers, sentiment already seems to be bouncing back in Nike’s favour. The company should expect positive medium and long-term results.

In the meantime, every training shoe that Nike antagonists burn generates more attention and therefore revenue for the company. Critics discount the current advertising campaign at their peril.

We should expect more of this kind of corporate support for social issues in Trump’s divided America. Capitalism and activism have always been uneasy bedfellows, but companies should be wary of appropriating social justice movements and equating buying products to fighting for human rights. Nike, and other companies, risk exposing their own skeletons in the closet by taking these high and mighty stances.