Anele Mdoda returns to television as host of The Voice SA 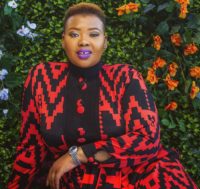 Radio and television personality Anele Mdoda has landed her dream job as host of The Voice SA. As a self-proclaimed super-fan of the show, she will kick off her role as the show’s presenter at the start of the Blind Auditions later this month.

“Since 1992, when my parents bought our first decoder, I’ve been dreaming of seeing myself on my favourite television channel. Best of all, talent shows, especially those that give South Africans a time to shine, are my thing!” Mdoda beams.

“I love, love, love The Voice. There is a very special camaraderie among the coaches, host and talent. Everyone does their best to make everyone else look and feel good. It’s friendly, it’s warm, it’s me! I am truly blessed that M-Net is giving me this opportunity and am excited to be there when red chairs turn to change people’s lives,” she adds.

How it came about

Mdoda visited M-Net to pitch two other shows from her production company (more on that in another article next week, keep your eyes on the site) when she was asked to host The Voice.

“They were like, ‘we’ll consider these other two things if you do this for us’. And they said ‘we’ve been considering you for a long time’ and I’d been speaking to them. And they’re were like ‘listen whenever you want to consider doing the talk show thing on our platform, let’s chat about it’. But I just needed a break. It’s been three years of everyday live, research. But now I’m rested and ready for it,” she says.

Racking up the awards

Mdoda’s latest hosting gig comes after she recently was named as both Joburg’s and Ekurhuleni’s Best Radio Personality. Here’s what she thinks are the characteristics that make a great radio presenter:

The Breakfast Club team also scooped both Joburg’s and Ekurhuleni’s Best Breakfast Show awards. Mdoda commented on how the team came about and what each team member brings:

“Everyone in the team is very strong. And I can’t hang out with weaklings because I will walk all over you. I need people who will push back at me,” she adds.

Asked about the differences between morning and afternoon drive time radio, Mdoda says it’s all about the execution of energy. She admits for the first time, that she used to think that afternoon drive radio was superior to breakfast, blaming Gareth Cliff for that.

“I was obsessed with Gareth when he did the drive, and he just did radio every which way I wanted to do it; calm, conversational, self-deprecating a bit, authentic, in the moment, and that’s why I loved my drive show,” she says.

Her aim was to get people in a good mood before they saw their families, and help them shed wash the day’s troubles before getting home.

Mdoda’s ultimate goal when starting out was to do drive time radio, but over the past four years, Primedia Broadcasting started angling her towards breakfast. Mdoda thought her energy was very afternoon, until she got into breakfast mindset.

“I realised I’m more suited to breakfast because I’m a live wire. Even if I’m not in the mood or upset or just having a bad day, I still know how to make that show, because other people are going through the same emotions while listening to us,” she explains.

Her aim now is to be aspirational, so people get to work thinking that ‘one day I will own this place’ and that their hard work is actually going somewhere.

Watch out for our article next week detailing the rest of the interview with Mdoda. She talked about her new content creation company, the state of South African radio, her views of social media, and much more!