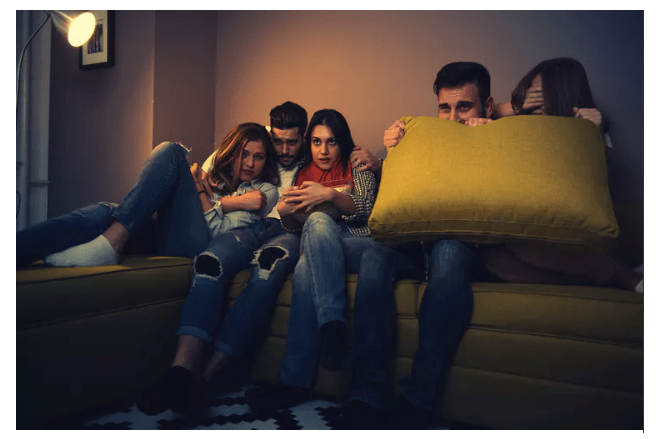 
As the weekend approaches, what better way to relax than with some seriously creepy movies and series. With cinema screens likely to be dominated by the long-awaited sequel to John Carpenter’s classic Halloween, here are five of the best recent scary titles currently available for streaming: four horror stories to rattle your bones and a zombie comedy to coax you back out from behind the sofa.

Ever since Robin Hardy’s seminal 1973 film The Wicker Man, British horror films have explored the relationship between town and country as a source of cinematic nightmares and this is no exception.

Calibre begins with two friends, father-to-be Vaughan and thrill-seeker Marcus, travelling from Edinburgh to the Highlands of Scotland to hunt deer. They arrive in a small village and head to the pub, where they meet the local villagers, including Logan, the leader of the community. Rather than relying upon supernatural scares, the story is driven by the actions of the two self-centred friends, and the reactions of the community to what they do.

What is effective about Matt Palmer’s film is the way he exploits the tradition of the potential threat of small, isolated villages and their inhabitants. Do the community worship some pagan god, or are they simply hardworking people watching their village gradually succumb to economic decline?

Gripping and original, Calibre is a tense, effective thriller that ratchets up the tension through a taut, logical sequence of cause and effect that tips gradually over into the arena of nightmares.

Turn off your phone, grab some snacks and settle down for ten hours of the finest horror drama in decades. Shirley Jackson’s seminal novel The Haunting of Hill House has been filmed on numerous occasions, most successfully by Robert Wise for his 1963 masterpiece of suspense and understatement, The Haunting.

This new version from Mike Flanagan (Gerald’s Game) is more of a new work inspired by the original source. It reimagines characters from the book as members of the Crain family, who lived in the house for a summer, leaving under mysterious and terrifying circumstances. Ultimately it is the family that is haunted, traumatised by the presences lurking within the corridors of Hill House.

Flanagan is fast becoming one of the most significant voices in contemporary horror. He builds an overall atmosphere of Gothic dread, using lavish, beautifully designed sets and roving camerawork to place the audience in the house with engaging and sympathetic characters who you really care about.

Treat yourself, because this series will be talked about as a masterpiece of TV horror for years to come.

Serial killer stories have become a staple of horror tales. Based on a novel written by American historian and author Caleb Carr and directed by Jakob Verbruggen (Black Mirror), The Alienist tells the story of the pursuit of a serial killer in New York by a group of amateur investigators led by the mysterious Dr Lazlo Kreizler (Daniel Bruhl), who is by profession an alienist – the forerunners of today’s psychiatrists or psychologists.

Kreizler is called in to use his understanding of the human psyche to help the corrupt New York police force find a brutal killer, who has murdered a young boy and mutilated the body. Accompanied by a newspaper illustrator, John Moore (Luke Evans), and Sara Howard (Dakota Fanning), the strong, independent secretary to the chief of police, they must discover the identity of the murderer before they kill again.

While the story may sound very familiar, what makes The Alienist so effective is the unusual New York setting, the focus upon psychological rather than criminal investigation, and the interweaving of the fictional story with real-life characters. The series has a plot that twists and turns, never fully revealing itself until the precise moment it needs to.

Stephen King is known as the master of horror, but there’s far more to King than scares. The most acclaimed King adaptations, Misery (1990) The Shawshank Redemption (1994) and The Green Mile (1999) aren’t tales that revolve around killer clowns or haunted cars. Rather they are character dramas with elements of the uncanny, such as the unnatural calm surrounding Tim Robbins’ Andy Dufresne in Shawshank, or John Coffey’s ability to absorb the evil of the world in The Green Mile.

Similarly in 1922 – directed by Zak Hilditch (Transmission) – Nebraska farmer Wilfred James (Thomas Jane) narrates the story of how he murdered his wife, dumping her body down a well on his property. From this basic premise develops a tense, dust-bowl drama focusing on the investigation into the disappearance and the consequences of the murder for both James and his son.

At the heart of King’s prose is his ability to create characters you can relate to in a fully drawn and instantly recognisable world. Wilfred becomes a fully rounded individual whose fate you come to care about in spite of the awful thing he does, drawing you into the story world where the action grips from the first moment.

It wouldn’t be Halloween without a zombie flick and – if you need a breather from all these serious horrors – look no further than this zombie comedy, one of the sharpest and funniest horror-inflected series of recent years.

Suburban couple Sheila and Joe Hammond are real estate agents whose lives are turned upside down when Sheila turns into a zombie. With the help of their daughter Abby and nerdy teenager-next-door Eric, they have to set aside their world of bake sales and dinner parties in favour of murder and mutilation.

The tone is set in the first episode as Sheila (played by Drew Barrymore), in the process of becoming a zombie, interrupts a viewing of an upmarket suburban home she is selling to extravagantly throw up – an outrageous sequence which sets up the love-it-or-leave-it style of the show.

Undeniably the it gory televisions – but in a way that is deliberately excessive and designed to be fun. Think of legendary British horror comedy Shaun of the Dead and you’re in the right ballpark. A strong, gutsy comedy with a strong message about non-conformity and being yourself, Santa Clarita Diet is an absolute delight. If you can get past that first scene that is.