LATEST NEWS
Home Broadcasting SA just wants to have some fun: Jeremy Mansfield is back on air

SA just wants to have some fun: Jeremy Mansfield is back on air 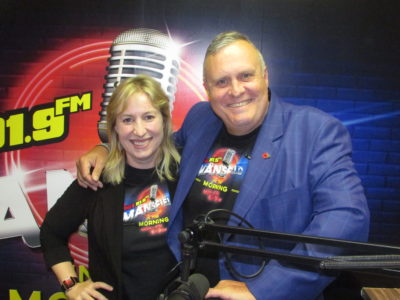 There was plenty of laughter, fun, and nostalgia as Hot 91.9 FM officially welcomed back Jeremy Mansfield on air.

Hosted at Hot FM’s studio in North Riding, a celebratory party started while the first show of Mansfield in the Morning was being broadcast. Reflecting on how it went, Mansfield says, “We didn’t know what to expect, but it got a bit manic. But it’s fine, it’s the first show and we’ll pull it back slowly”.

The standout moment from the first show was the announcement of the return of the Teddython, with Mansfield enthusiastically punting for a “low target” of R2 million, met by disbelief and despair by Cowen.

But despite the Teddython, Mansfield explains, “We made a decision to not put too much into the show, meaning features. Rather let them organically develop, because you’re sounding out what the audience wants and needs, and what pushes their buttons and what gets them laughing. It’s a show that will be reinvented by the audience as it goes along.”

A heavy focus on charity

As illustrated by the launch of the Teddython, Mansfield and the team want to use this show as a platform to drive charity work. “It’s creating the right platform to be able to perform the charity work that we need to get done,” says Mansfield, bluntly. “The only way to do that is to design the show around the listeners so you are attracting the right kind of listener, that advertisers want to get to, so you can then go to the advertisers and say, ‘this is what we have to do to fulfil the charity side of it’.”

Cowen points to another important element that she believes the show is designed for, the delivery of fun and light-heartedness.

“South Africa is tired at the moment, and it’s sad, and it’s poor, and it doesn’t want to think and talk about that any more. So they want to have some fun and the idea that you can sit and make a joke or have some fun or play a stupid advert about sofa king, and let people laugh on the way to work, it’s important to say to people ‘it’s okay to have a laugh and you’re allowed to be happy’,” she explains.

From politics to radio

The pieces of the puzzle all came together and everything fell perfectly into place for Mansfield’s return. Sasha Martinengo was removed from the station after he called EFF leader Julius Malema a “monkey” on air, while Mansfield was busy in the selection process for a political spot. Once the gap appeared on air, station manager Lloyd Madurai phoned Mansfield one last time to ask him to come back.

“As much as I would like to at some stage go into politics, because I believe I could contribute something in that area, right now we are living in really harsh times and families are struggling and I believe right now I could make more of a difference in a community using this platform, rather than using a political platform,” Mansfield explains.

Why bring Mansfield back?

Explaining why the decision was made to bring in Mansfield, station manager Lloyd Madurai says, “Jeremy was probably the most loved DJ in Joburg for many years… He’s a tremendous talent, he’s the perfect fit for Hot 91.9, and with the station being a non-profit organisation, Jeremy is very in touch with charities and wants to assist and make a meaningful difference and he speaks about shared value, which is what Hot 91.9 is all about.”

Madurai adds: “He brings an audience to the station. He’s loved by both young and the slightly older market. And he’s bringing the Jeremy Mansfield brand, because he’s a brand on his own. He also brings skills to our Radio Training Academy and mentoring for a lot of people at Hot 91.9, particularly the younger talent.”