The Sanef Commission on Ethical Journalism: A wish granted 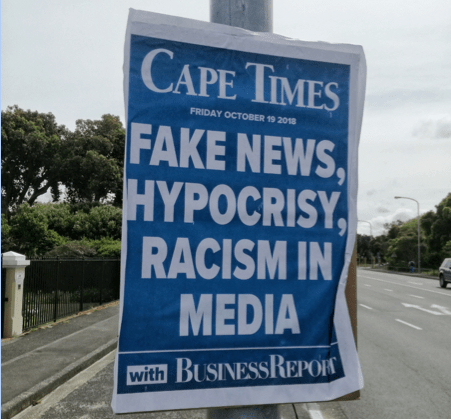 [ANALYSIS] I invite interested editors and journalists to challenge our chairperson and myself to partake in a national live debate on multi-sided platform companies and their value.

A further critical resolution taken was around the details of our proposed inquiry into media ethics. Sanef is working towards establishing an inquiry into claims regarding media capture and credibility. The intention is to launch this six-month inquiry by an independent panel headed by a retired judge in the first half of 2019.

In an article calling for the criminalisation of unethical and fake news, published in April this year, the editor of Independent Media’s Business Report supplement, Adri Senekal de Wet, called for a national debate on such matters. 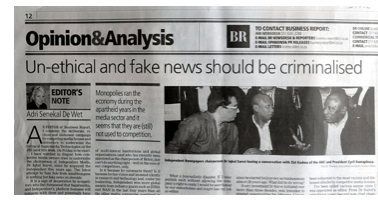 Given the fact that neither she nor Independent Media’s owner, Iqbal Survé, have responded to an excoriating attack on his stewardship of the Indy newspapers and the conduct of the editor of the Cape Times, Aneez Salie, by Dougie Oakes in a Daily Maverick article, and a follow up on his blog site, I am sure they will both seize with alacrity the opportunity to testify at the forthcoming Sanef Commission on Ethical Journalism. So too, I am sure, will Salie.

One of the basic tenets of ethical journalism is ‘do least harm’ and, in a country with a racially-divided past which is striving to live up to Nelson Mandela’s ideal of nation building through reconciliation, it is surely unthinkable that a newspaper editor would abuse his power and influence to deliberately widen societal and ethnic divides.

Even more unthinkable, surely, would be the company owner tacitly condoning such an approach.

Yet, shortly after Salie was appointed as editor in May 2015, an article appeared in the Cape Times headlined ‘Foetal Alcohol Syndrome’s Sad Legacy’ which claimed that wine farmers in the Western Cape had embarked on a deliberate programme of inducing wide-scale foetal alcohol syndrome (FAS) among their women employees through the use of the illegal ‘tot system’.

I knew from personal experience that the article could not be true because I had been visiting the Breede River Valley as a fly fisher since 1978 and lived on a Rawsonville farm for a year after I had left the public broadcaster in 2006.

The Cape Times article made no sense because such a claim had never been made by Cosatu and I knew that most wine in the region was sold to British supermarkets like Sainsbury’s who sent their own wine makers to the area each year to oversee the harvesting of grapes and the wine-making process. They would have been the first to raise the alarm if the article was true.

Furthermore, I knew that the wine industry had established Wieta, the Wine and Agricultural Ethical Trade Organisation, 13 years before this article appeared and that member farmers paid Wieta to monitor their farms and avoid unethical practices.

It all began to make sense when Helen Zille published an article, ‘Some very strange reporting at the Cape Times’ on Politicsweb in which she claimed that most of the article was plagiarised.

It took me a few hours, a few phone calls and a few emails to establish that the closest the reporter who had written the article had come to a foetal alcohol syndrome case was to a foetus in formalin in the medical museum at the Tygerberg Hospital. I detailed my investigation in an article Truth, Ethics and Plagiarism on this website.

In short, ‘Rose’ and ‘Baby Thomas’, the alleged victims of the evil wine farmers and their illegal practices, do not exist and Salie did not respond to my challenge that he call a press conference and name and shame the farmers responsible.

But what could have motivated the publishing of such blatant and brazen lies in what was, before the Sekunjalo takeover, one of the most respected newspapers in the country about an industry which is the largest employer in the province and earns hundreds of millions annually in foreign exchange through exports and tourism?

At the time I knew, because friends and professional colleagues working at Newspaper House, the headquarters in Cape Town’s CBD of the Cape Times and the Cape Argus had told me, that Salie was motivated by an intense antipathy towards white people occasioned by the time when he and his former wife, Shirley Gunn , were arrested as MK operatives and mistreated while incarcerated by the apartheid era security police.

Salie made that antipathy a matter of public record in an article which contains the following quote by him: ‘F*** you boere’.

He made his antipathy towards his fellow citizens a matter of further record in a Cape Times editorial on 3 September this year:

No longer do we serve primarily the descendants of the English colonists.

We are humbled and deeply grateful that you the readers warmed to this approach with loyal support, rejecting calls for a boycott by those colonial, unrepentant racists who once prostituted the Cape Times for their narrow political ends.

Since Salie became editor, the Cape Times has relentlessly sought to demonise white South Africans as innately racist, a campaign which saw a youth innocent of any crime, Chad de Matos, incarcerated in one of the world’s most dangerous prisons because he was white and a UCT student.

Despite the fact that de Matos had never touched or even spoken to the lying complainant, he was depicted on the front page of the Cape Times under the vile and vicious headline, ‘Accused racists’ release probed’. 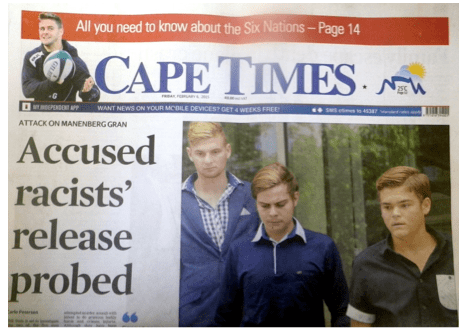 This article by Carlo Petersen illustrated the extraordinary degree to which ethical journalism was abandoned with the Sekunjalo takeover.

Since Salie became editor of the Cape Times the front page routinely carries headlines containing the word ‘racism’ and any excuse for such an article will do, no matter how trivial. 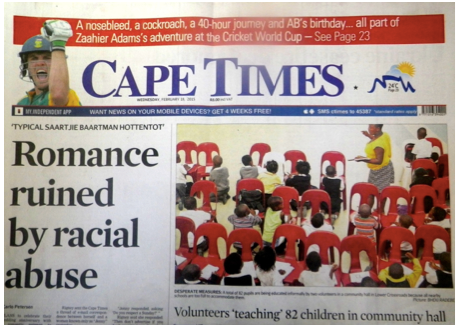 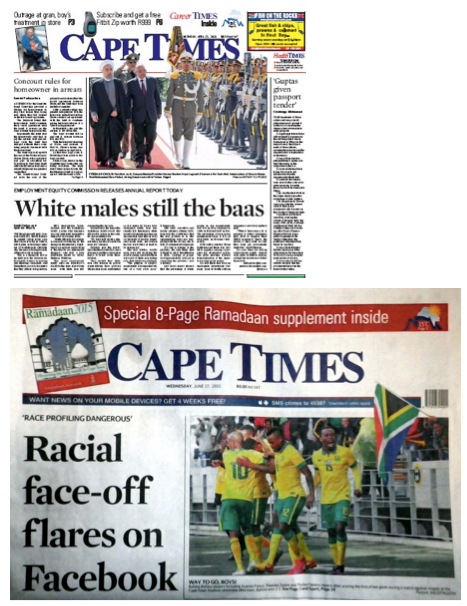 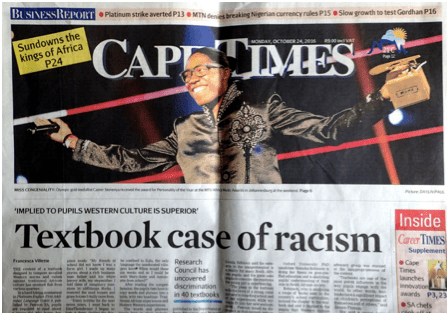 And if the headline, no matter how untruthful, contains the word ‘Zille’, Salie clearly sees this as a bonus in an ongoing campaign to disparage and belittle her. 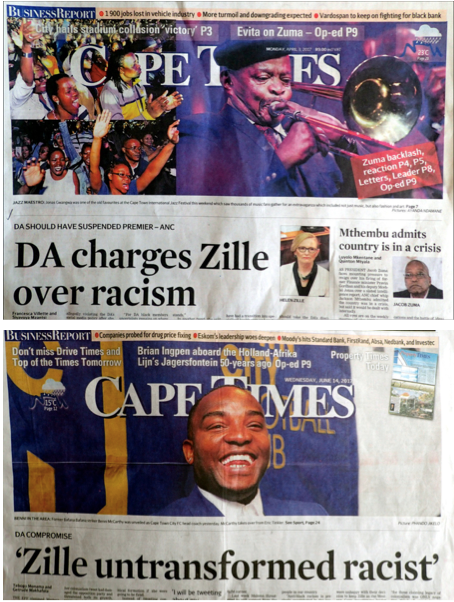 There was nothing subtle about this effort by Eusebius McKaiser to ramp up ethnic hatred against Zille.

The way in which Salie has abused his position as editor of the Cape Times to widen the ethnic divide clearly carries the imprimatur and approval of Survé and, in my perception, Survé expressed similar sentiments in a speech on 7 April 2015 at a meeting of the UCT Association of Black Alumni (UCTABA) hosted in the Kramer Building at the university,

Two years after the now-dismissed Dr Dan Matjila, CEO of the Public Investment Corporation’s highly controversial billion-rand loan to Survé, an investigation by Dr James Myburgh of Politicsweb revealed that Survé was making no attempt to repay the loan, and that interest was mounting.

This was confirmed by Reserve Bank governor, Tito Mboweni in parliament on 7 September this year.

At 13.07 on 3 December, Linda Ensor of Business Day broke the news that the PIC had written off the loan but the next day’s Cape Times carried no mention of this and neither did the accompanying Business Report.

This debt write-off is completely at odds with a Business Report article in April and it raises the question – was this article, headlined ‘Independent’s PIC debt in check’ a deliberate lie to deceive advertisers and shareholders?: 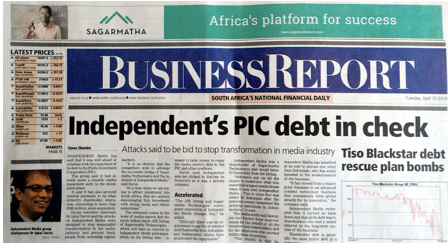 Censorship by omission is the stock in trade of the propagandist and has become routine at the Cape Times since Salie was made editor so nobody should be surprised at such journalism but Survé has a simple response to anybody who raises concerns – they are racists. 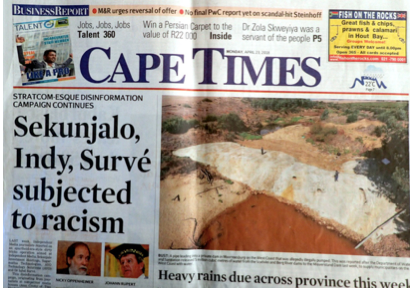 This plays itself out in front page leads and on billboards.

We know how Survé treats his newspaper staff because Alide Dasnois made this a matter of record in her court papers in which she successfully sued him for unfair dismissal. She said that he verbally abused her at a disciplinary hearing and promised to ‘use his billions’ to destroy her reputation and prospects of future employment. Given the opportunity to contest her evidence in court, Survé declined.

Now we have an article by Dougie Oakes which, if untrue, is hugely defamatory.

Oakes, as a former Cape Times employee, alleges that dishonourable journalism and pro-Zuma faction bias is the norm, that white staff are discriminated against, that Survé is a narcissist who knows it all and surrounds himself with fawning sycophants and that, on his watch, total chaos reigns.

Despite this, there has been no rebuttal of the Oakes article from Survé, Salie or Senekal de Wet.

What is clear, given the dozens of complaints to the Press Council before Survé followed the lead of the Guptas in avoiding accountability and withdrew from this system, is widespread public anger about the pervasive disinformation peddled by his newspaper company.

Furthermore, I am told that reporter Carlo Petersen, who drove the anti-white fake news campaign against the Tiger Tiger Five as well as the Cape Times campaign against UCT and its vice-chancellor Dr Max Price, has not been seen at Newspaper House for some time and is presumed to no longer work there.

There can be no doubt that Survé has brought South African journalism into disrepute not only locally but internationally as well. If you contest that, read the article in The Economist three years ago and the articles this year by Azad Essa and Tatenda Gwaambuka.

Another round of retrenchments looms at the Indy newspapers and next year’s Sanef-organised inquiry into unethical journalism and fake news will provide Survé, Senekal de Wet and Salie with the opportunity to testify about the tragic implosion of a once-respected newspaper company.

In the meantime, it behoves them to explain the PIC debt write-off and how this benefits the GEPF members and to respond to the Oakes article – after all as Survé told Mandy de Waal in a 2013 Daily Maverick interview…

“If you know anything about me you know that I operate with incredible integrity.”

For more context in this regard read the articles by Terry Bell and Peter Flack.

* Opinions published on The Media Online are not necessarily those of Wag the Dog or the editor but contribute to the diversity of voices in South Africa.