Interpublic’s Initiative has landed Nintendo as a client, whipping it away from Publicis’ Blue 449, AdAge has reported. The change in media agencies followed a competitive review.

Kantar Media reported that Nintendo spent $84 million on paid media in the US in 2017 and just under $36 million during the first nine months of 2018.

For more, check out the AdAge story here. 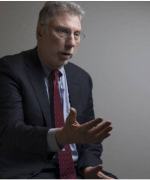 Martin Baron, executive editor of The Washington Post, will be awarded the Founders Award for Excellence in Journalism from the International Center for Journalists.

The award will recognise Baron’s long career as a media leader committed to truth and the highest standards, and he will receive the honour at ICFJ’s 35th Anniversary Awards Dinner on 7 November in Washington, D.C.C

P&G’s chief brand officer on a world without ads

Chief brand officer at Procter and Gamble got the ad world talking when he said advertising’s days were numbered, and that marketers should “start thinking about a world with no ads”.

Marc Pritchard addressed delegates at CES 2019 about the growing ad-free environments, ad-blocking tools and the shift from linear TV, resulting in an in-depth report from WARC: P&G’s Pritchard considers “a world with no ads”.)

Pritchard reckons companies will engage with consumers via smart products, and will forge direct relationships with the market. He referred to Oral-B’s web-enabled toothbrush and Olay’s Skin Advisor digital platform, both of which offer personalised beauty to customers.

“And when you have these kinds of technologies embedded in the products, it actually makes them more central to the brand-building experience. I think it could eventually replace advertising as we know it.”

A plan by the government of Pakistan to regulate social media is coming ever closer to fruition, with the latest development being information minister Fawad Chaudhry announcing the creation of a new enforcement arm.

Content related to hate speech and extremism on social media platforms is the alleged target of the crackdown  by the government, but some people are skeptical and believe this is merely further government censorship and a threat against freedom of speech.

Meanwhile, the government claims that arrests have already been made of people posting this type of content and that more are expected soon.

The Economic Times has the full story, here.

Insights from a new study by ID Comms, the 2018 Global Media Talent Report, say that advertisers are shifting their attention away from agencies and looking more in-house for media talent.

Boosting in-house talent was identified as the number one priority for marketers last year,suggesting that large-scale advertisers are of the view that they need greater capability of handling digital media in-house.

The study also found there is a general sense that marketers need a better all-round understanding of all media.

WARC has more insights from the study, which you can see here.

A report by Dame Frances Cairncross’s into the future of the press in the UK could have a major impact on digital advertising, including forcing Facebook and Google to “open up their businesses and share details of how their advertising model works”, The Guardian reported this week.

A government-backed investigation into the dominance of these giants was launched after concerns that their business model was hurting news publishers to the tune of millions of pounds of revenue.

Now culture secretary Jeremy Wright, has asked the UK’s Competition and Market Authority to study the “largely opaque and extremely complex” world of online advertising. This could result in a major investigation “which would allow the competition regulator to use its legal powers to obtain information from the secretive technology companies”, the Guardian said.

For the full story on The Guardian click here.