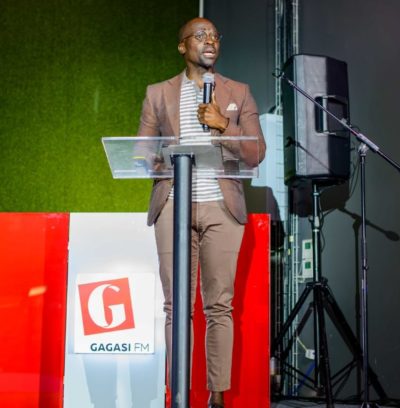 Gagasi FM turned 13 years old on 13 March. In celebrating the birthday, the daytime shows took listeners back down memory lane, one lucky listener walked away with a brand new car and ultimately a mother of all parties sealed it all.

The country’s biggest regional radio station celebrated its birthday in style and the first segment of the day saw the breakfast show, mid-morning show and midday show doing outside broadcasts in various locations with former presenters of these shows co-hosting with current presenters. I Love Mornings, broadcasting live from Barons Edwin Swales dealership, was hosted by former breakfast show presenter Alex Mthiyane together with current co-presenters Njabs Zwane and Heazy. Barons Edwin Swales sponsored the 13 birthday celebration with a brand new Citi Golf fitted with a 2.0 litre engine.

Golden Circle was co-hosted by current presenter Nomfundo Mzolo together with former presenter Phindi Gule and the outside broadcast took place at Views 25 in Morningside. The venue has become the second home to Gagasi FM having hosted a number of station’s activities and is very much aligned to the brand. It was then only relevant for it to feature in the station’s birthday celebration.

The last OB for the day was Midday Madness at Chesterville Taxi Rank, the show was hosted by former presenter Mzokoloko together with current co-hosts DJ LeSoul and Flymotion. It was in this taxi rank where Mzokoloko first set his foot in Durban 21 years ago when he came to the city to pursue his radio dream, and the spot has always had that sentimental value to him since then.

“This year we decided to reflect on the station’s journey in celebrating our 13th birthday. The mixing of the current and former presenters of prime time shows was in celebration of both where we come from and where we are as the station. One of the things we have done so well over the years has been that of balancing the generational mix in terms of our on-air talent, ensuring proper development and succession of talent on shows. We believe the special line-up for our 13th birthday demonstrated this,” says Gagasi FM head of brand Phinda Magwaza.

The second segment of the birthday celebration was a car give-away which happened live during The Kings Drive, hosted by the Kings of the Weekend, DJ Sphectacula and DJ Naves. The give-away took place at the Gagasi FM studios at Cornubia Mall where five selected listeners were faced with five hostesses who had car keys with them, each listener had to choose a hostess that they believed had a correct key for the car. A listener with a key that could switch the car engine on, would walk away with the car. After the first 3 listeners who attempted to switch the car engine on with their keys couldn’t, the key held by Nokwanda Zondi (29) from Mayville was the one, it switched on the car and she was the lucky winner!

Magwaza shared a perspective behind the choice of a City Golf as the birthday grand prize and a special history the car has with black communities, especially in the townships. “A Citi Golf is the iconic symbol of the youth culture within black townships. It represents a particular stage and progress in one’s life. The 2.0 litre fitted engine in the car makes it a unique machine, you’ve got heritage and power in one, and that is priceless,” says Magwaza.

Gagasi FM 13 on 13 festivities closed with the Crown Birthday Party at the station’s offices. The party was attended by the station’s various stakeholders and clients, artists, Gagasi FM DJs and staff members. Former Minister of Home Affairs Melusi Gigaba and long-time friend of the station gave keynote remarks in congratulating the station for reaching 13 years. Talented Durban Afro-Soul artist Zakes Bantwini gave a stunning live performance alongside Gagasi FM DJ Vumar who did a live set with Iziqhaza and got guests dancing a night away.