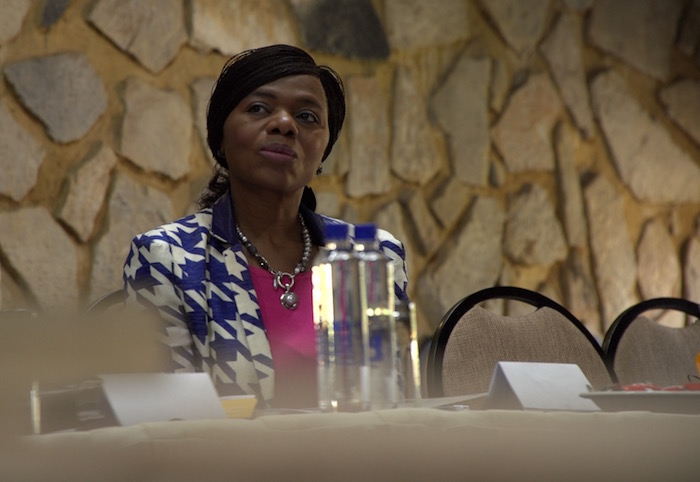 A perfect fit for Women’s Month, the acclaimed documentary won the Special Jury Prize at Hot Docs, North America’s most important documentary festival, as well as awards at FESPACO, Luxor African Film Festival, and Jozi Film Festival, where it was also the opening night film, like it was at Encounters.

The Hot Docs jury praised Whispering Truth To Power for “its timely portrait of a bad-ass public servant who uses her office for good at a pivotal moment in South African politics”.

With exclusive, behind-the-scenes access, Whispering Truth To Power charts the final year in office of South Africa’s anti-corruption champion as she attempts to seek justice for ordinary people.

After successfully challenging President Jacob Zuma for illegal use of state funds, Thuli now has to face the biggest challenge of her career: investigating – in the face of protests, death threats and legal challenges – the alleged systematic takeover of government by a private family in cahoots with the President.

But while Thuli herself is inspiring, the story Whispering Truth To Power has to tell is sobering for South Africans.

“In other countries, people don’t know who the ombudsman is,” says her son Wantu early in the documentary, after complaining good-naturedly about how hard it was for him to have a normal conversation about Liverpool versus Manchester United without someone bringing up his mother. “If the government is doing their job properly, then the ombudsman is not this celebrated figure who is fighting the good fight, because there shouldn’t be that fight.”

While Whispering Truth To Power is partly a gripping tale of Thuli versus Zuma, the Guptas, and a ticking clock, it’s also an intimate look at her life as a single, working mother of two adult children, and the generational tensions that exist in South Africa at the moment.

At the time of the documentary, Madonsela’s daughter Wenzile was a student at The University of Pretoria, a member of the EFF’s student structures, and clearly had a different view of South Africa’s political priorities to that of her mother.

“There is tremendous love between them, and there are of course, raging tensions,” wrote Sisonke Msimang in Africa Is A Country. “Their relationship. with all its contradictions … is perhaps a perfect metaphor for the state of South Africa.”

Whispering Truth To Power was the debut feature documentary from director Shameela Seedat, who previously worked in human rights and social justice research and advocacy, including at the Constitutional Court in Johannesburg, UNIFEM in New York and the Institute for Democracy in South Africa.

Whispering Truth To Power is just one of a number of great films and series by accomplished South African women on Showmax, like Nosipho Dumisa’s gripping Cape Flats thriller Nommer 37; Catharine Cooke and Cindy Lee’s record-breaking high school mystery series, The Girl From St Agnes; and Aliki Saragas’ award-winning documentary about the women of Marikana, Strike a Rock.