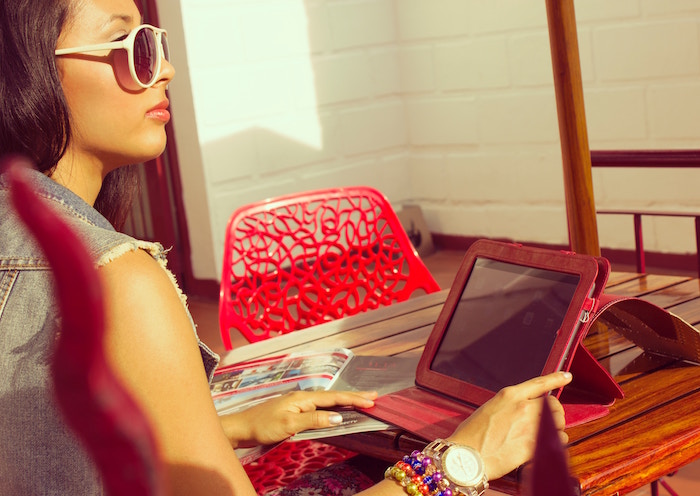 The media landscape is changing rapidly and media owners need to be aware of, and actively work with, emerging trends to ensure their successful transformation.

That’s the word from James Hewes, president and CEO of FIPP,  the global media network, who delivered a presentation on media trends at a FIPP Insider event held in Cape Town this week.

Hewes believes we can no longer look back at the rate of change but must anticipate what will happen next as the pace of change is rapidly accelerating, and this will continue exponentially over the next few years.

In the meantime, though, advertising revenue that was once the lifeblood for magazines, newspapers and linear television is no longer the primary revenue stream for many publications. Advertising gains made since 1950 have been wiped out over the last 10 years. So how can media owners diversify their revenue streams? The point is not to replace dependency on one revenue stream with dependency on another one, Hewes reckons.

Such streams could include paid content, retailing, events, club membership, and other options, but no single source holds the power. Hewes says media owners should include at least three or four of the 11 models in the table below in their business models. 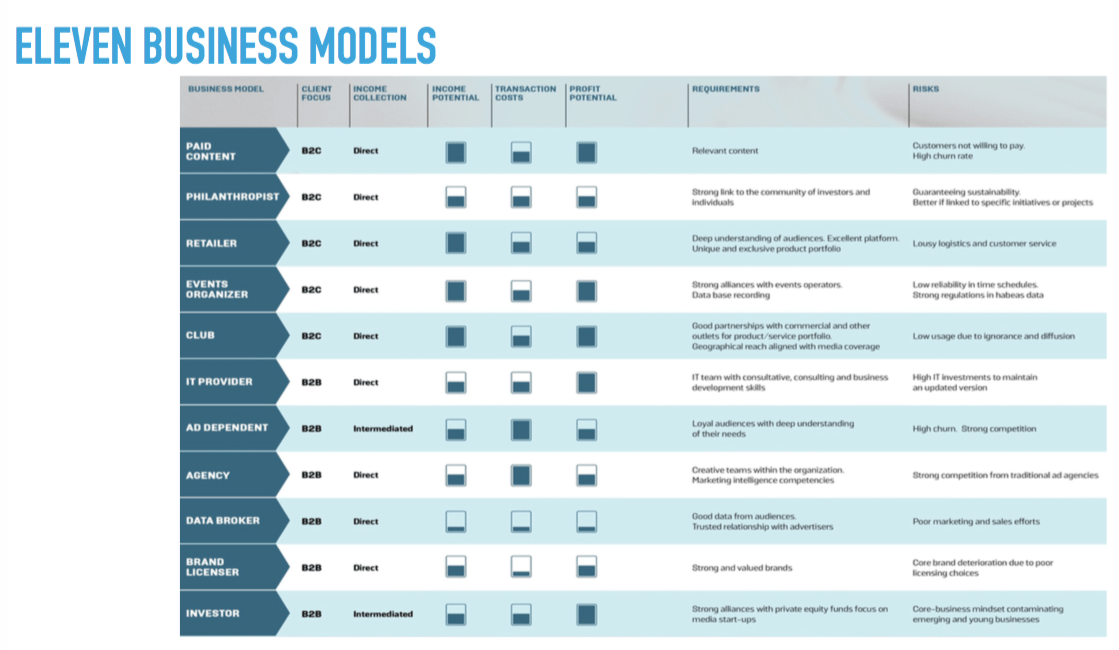 The media business is currently in an exceptionally rapid period of consolidation with buyout deals happening at an unprecedented level. Global deals include Meredith buying TimeInc and Hearst buying Rodale. In South Africa, Labashe Investments has just bought Tiso Blackstar.

This trend is set to continue as the industry is focused on dominating in one or two categories. “The days of having diverse portfolios where you have one or two market leaders and a whole bunch of others, are over,” says Hewes.

The advantages of this are that new players are entering the market, bringing new ideas and innovation, such as the impact that Jeff Bezos and Amazon have had on the Washington Post, where technology is driving reader revenue.

Immediate Media’s purchase of BBC Good Food in the UK has allowed the magazine to form a relationship with every single food consumer in the UK – a database that includes 26 million people. Their growth will not come from acquiring new consumers, but rather from monetising the consumers they already have and increasing the transactional value of their existing consumers.

Readers are increasingly prepared to pay for quality, specialist content. The Economist’s chief marketing officer and managing director of circulation, Michael Brunt, says they are charging the same price for both digital and print subscriptions “on the grounds that you are paying for the content and not the format”.

Companies need to invest in data/customer knowledge to build subscriptions and add value through exclusive memberships.

Ecommerce should focus on seamless, transactional technology – transforming media to audience-focused content and commerce. Amazon’s ‘one click’ process is key here, as opposed to complicated sign-up and ordering processes that often result in consumers preferring to go into physical stores to shop.

Events allow publishers to monetise their audiences by giving them a direct relationship with their readers, driving loyalty and subscriptions and then delivering a great platform for advertisers.

The state of advertising

Hewes says advertising has never been less important for the industry than it is today. Although it is still a crucial revenue stream, and this won’t change, it is not the most important and a new approach to building revenue is needed.

The key to developing new strategy is how does advertising integrate with your users’ experience? Factors to consider are how to “politely interrupt the creative”, and what technology can be harnessed to deliver better results?

Native advertising must create authentic, opinionated and purposeful copy to engage readers. Silos need to be broken down in the business by having advertising and content people working together in the same room, with editors taking responsibility for overstepping the line commercially.

Adblocking is increasingly becoming a concern, mainly due to the consumer’s negative experience of digital advertising. Adblockers are going to be built-in to next generation Apple products and to the next generation of Chrome. Companies will need to have a clear, consistent approach with their consumers to prevent this.

After many years of decline, print is finding its place in the media mix. “People are starting to understand the importance and the power of touch and feel that the physical, tangible asset that print represents”, says Hewes.

Print is seen as a quality medium, the ultimate touchpoint with luxury appeal that is consumed slowly and lingers in households.

Advertisers and consumers are beginning to recognise this and are now starting at coming back to print.

The coming AI revolution means the time is now to create an overarching data strategy across both advertising and editorial. AI is already powering content recommendations, and understanding user journeys and changing the marketing approach for dynamic paywalls.

The New York Times is using AI to determine a user’s propensity to subscribe, looking at factors such as frequency of use and user location, and adjusting the paywall accordingly. This approach allows the user to consume content on a casual basis, keeping them engaged and looking for the opportunity to upsell them to a greater level of engagement through selling a subscription, which is now an automated process.

“The advantage of that is that you’re still holding on to your advertising revenue because 80% of your traffic comes from casual users who are not going to pay for pay-walled content. So it’s the best of both worlds,” says Hewes.

There is now a clear divide emerging in media businesses between those who build their own tech and those who buy it in.

At the larger end of the scale, companies such as Axel Springer are looking at their technology and making the strategic decision to build it themselves.

There are advantages and disadvantages to both approaches.

The advantages to being a builder is having the ability to control the technology pathway and the financial advantage of selling that tech to other media companies, providing an added revenue stream.

The disadvantage is that if you’re not a tech company, you won’t be able to compete for the same level of tech resources.

The advantages for the buyer are no cost of development, but that means no control of the development pathway.

Builders now starting to come to market with their technology. An example of this is The Washington Post. They’ve built their own end to end technology suite around newspaper publishing, which includes everything from a content management system, right the way through to an analytics package, all designed in conjunction with their newsroom, to suit the Post’s business.

“Obviously with the power of Amazon behind them, it’s an excellent package. They’re now taking that to market, to newspaper companies and offering them third-party use of their software, and they are now starting to gain traction. They’ve got a sales team in place to do that and they’ve added an externally focused development side to their business,” says Hewes.

According to Hewes, this is the most important emerging trend to consider. Attracting and retaining the right talent is crucial to developing a corporate culture that can lead transformation in the industry. This transformation needs to be driven by management to keep business agile and open to innovation. Optimising training to develop new skill sets for transformation is essential.

Diversity is key. New networks of talent, culture and leadership need to be built to take advantage of the changes in the industry and to lead transformation.