Entrepreneurmag.co.za shuts after issues with US licencing costs 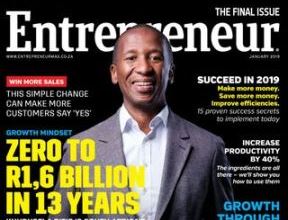 Popular business publication Entrepreneur Magazine South Africa closed its doors at the end of August and about 10 people lost their jobs, The Media Online can reveal.

The closure of the publication follows an announcement in late 2018 when Enterpreneur Magazine South Africa said it would cease the print edition, but would continue as a digital-only title. The January 2019 edition was its final print issue.

The closure was partly due to issues around the cost of the licence fees from US parent company amid the weakening in the US dollar/rand exchange rate, sources close to the publication have revealed.

Other factors to weigh on the publication included increased pressure from advertisers to provide discounted rates and difficulties in dealing with the onslaught of digital change, the sources said.

The shutdown of Entrepreneur Magazine South Africa is yet another recent example of an international media publication, along with Marie Claire and Huffington Post, that has set up a local version but ultimately the local edition couldn’t be sustained.

Marie Claire closed after 15 years in the local market following the publication of its December 2018 issue because Associated Media Publishing decided not to renew the licence of Marie Claire locally. At the time, CEO Julia Raphaely said the company wanted to harness its resources “for a new type of publishing model”.

Huffington Post and Media24 in July 2018 announced that they would shut Huffington Post South Africa, ending their partnership after just 18 months. At the time, management said advertising was a challenge despite a growing readership and good engagement with its content, and the title “simply couldn’t scale that support to the levels the business plan demanded”.

Entrepreneur Magazine South Africa positioned itself as a ‘how to’ handbook for growing and upcoming companies, winning several publishing awards over the years.

It offered practical advice on entrepreneurship and small business in South Africa including features on starting and growing a business, strategy and franchising.

When contacted for comment on Monday, Todd said a media statement on the closure would be forthcoming on Tuesday.

From the end of August this year, EntrepreneurMag.co.za was replaced by Enterpreneur.com.

There is still an EntrepreneurMag.co.za website but the articles on the website are at least five months old.

On the South African section of the Enterpreneur.com website the last published article is dated 5 April this year and is a story about financial services company Yoco having raised R300 million in venture capital funding.

Justin Brown is a freelance journalist. He has over 20 years of journalism experience. He was until recently the business editor at City Press. Prior to joining City Press he worked for The Star’s Business Report for almost ten years. He holds a four-year Bachelor of Journalism degree from Rhodes University and a Bachelor of Commerce degree from the University of South Africa.