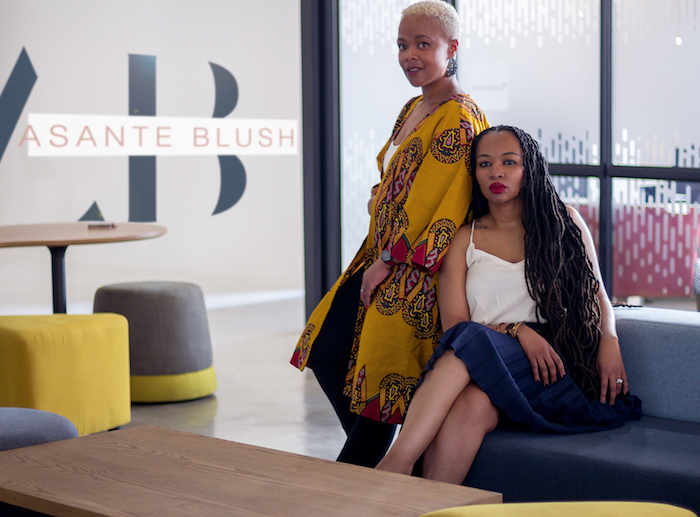 
It’s a tough time in South Africa right now, economically and socially, but this climate hasn’t stopped two women from giving life to their dream of launching a female-focused ad agency.

Cuma Pantshwa and Zama Nkosi-Mabuye believe fortune favours the brave, and reckon now is an “opportune time for Asante Blush to serve and help brands and organisations elevate women’s voices”.

The name, the co-founders explain, is combination of Asante, which means ‘thank you’ in Swahili, and ‘blush’, a colour associated with femininity, intuition and insight. “We strongly believe that those two things, gratitude and femininity, are the key to unlocking excellence, magic and splendor for the greater good of those we serve,” Pantshwa and Nkosi-Mabuye say.

Yes, times are tough and economic challenge are many but, “We believe it’s a good time to be launching an agency such as ours because issues pertaining to women have always been important and in need of attention. The idea of the future being female has been on the lips of many but on the ground, the reality looks very different,” they say.

“Starting a business is always a big leap of faith no matter what the economy looks like, we decided that the present is a great place to start if you want to positively influence the narrative of the future. The reality is that we’ve identified a huge gap with this market and there’s lots of work to be done by brands and organisations so we are here to do that work, and together with our clients, make a difference.”

Of course, launching any business is not cheap. “We are working on a lean start-up model as we launch. We are bootstrapping and self-funding but have started engaging with other funding models. We also have great mentors that are helping us navigate the waters as first time business owners.”

Pantshwa’s strength is in the the field of television production. After graduating from Rhodes with a journalism and drama degree, she joined Urban Brew and worked on such iconic shows as Yo.TV’s Blue Couch and South Africa’s first live  interactive show, Wild Room. She is a highly skilled content specialist, who later joined HDI Youth Marketeers.

Creative director Nkosi-Mabuye has worked in the publishing, ideation and marketing industry. Her love and dedication to storytelling, building genuine connections between brands and their consumers and women-centric issues have been the common thread in all the roles that she has worked in. She has worked with brands such as COSMOPOLITAN magazine, Mercedes-Benz SA, Essays of Africa, Nedbank CIB and SAB.

The past two weeks have once more exposed the horrific reality of the extent of violence perpetrated and perpetuated by men on South African women. Voices raised in protest has finally stirred government to action, and women into taking charge of the narrative, protesting and demanding cohesive and effective action.

“Our research shows that women’s main concern continues to be safety. We are at a place where we need the coming together of minds to fix the horrific issues that we are forced to live with,” say Pantshwa and Nkosi-Mabuye. “One of the challenges we have is taking things further than conversation, and moving into solution implementation. Our goal is to be authentic and very realistic about the issues women face in our country; we are not in the business of sugar coating. We aim for far beyond campaigns that are beautiful just for the sake of being beautiful; we want to work on solutions that make a real and meaningful impact.”

Pantshwa and Nkosi-Mabuye say women are too often women spoken about and treated as though we are a small niche in the market when the reality is that we make up 51% of the South African market. “We are the household chief purchasing decision makers and modern women have huge spending power despite the wage gap that we are still fighting,” they say.

“We are very aware of the fact that the industry is male dominated and most of the creative and executional decisions are still made by men. According to Creative Equals in the UK, women only make up 32% of creative departments and 75% of creative women have a male boss and their work is 10% less likely to be entered for awards. Creative women are 2.5 times less likely than their male counterparts to be in a senior creative role. The local industry is not faring much better, which means a lot of the messaging out there is skewed towards a male bias.”

They believe while there are many female creatives already doing amazing work in this space, “the more of us there are, the better because our voices will be amplified”.

Pantshwa adds that while the advertising industry is making great strides towards gender inclusivity as well as how women are portrayed or spoken to in advertising, but that “there is still a long way to go and we want to be at the forefront of the change that is inevitably coming”.

Nkosi-Mabuye says new agency’s ambition is not only to aid in amplifying women’s voice but to also help brands “speak to their female consumers in a manner that resonates with them. Not only from a marketing comms point of view, but also through inculcating the thinking that is needed to create an ecosystem that feeds the female value chain”.

They have bagged their first client, financial services business, NFS Group, which Asante Blush are helping rebrand and reposition their business as they grow from a regional to a national business.

The pair have a CSI strategy in place, which again, is women and community focused. “We were raised in environments where our parents were and continue to be people who reached out to help the communities they lived in. We have also experienced the same in our careers where amazing people have reached out a helping hand in various capacities. We plan to do the same as a business. Our focus again is on empowering women, especially those that come after us as well as the young men who will need guidance and assistance to be well balanced, positive forces in our society. We also plan to work with clients that have a similar vision in giving back while doing brilliant work that improves their bottom line.”