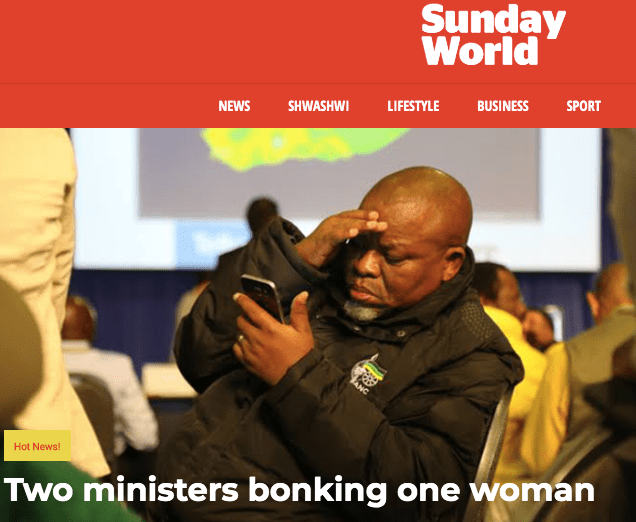 *It has been quite some time since South Africa had a genuine sex scandal involving politicians. But Sunday World’s explosive exclusive published this weekend involved so much more than two politicians competing for the same young woman. It came ripe with accusations that minister of mineral and energy affairs, Gwede Mantashe, had paid two Sunday World journalists R70 000 to bury the story.

The newspaper reported that Mantashe and finance minister Tito Mboweni had competed for the affections of 26-year-old ‘aspiring’ actress and student, Lerato Habiba Makgatho. The front page story was illustrated with screenshots of what appeared to be conversations between Makgatho and the ministers.

Of huge concern to the media, however, were Mantashe’s claims that he had paid off the journalists who had the story to quash it.

Although Tiso Blackstar sold Sunday World in June 2019 to Fundudzi Media, the media house issued a statement saying it “noted with shock” the “alleged admission by a sitting government minister to have corruptly bribed two Sunday World journalists”.

“These allegations were never brought to the attention of the company,” it said, adding that thepress code and the company’s own editorial policy were “opposed to any form of corrupt and unethical journalism”.

It was a “dismissible offence to accept money or any form of bribe to write or not to write a story”.

Sunday World editor, Makhudu Sefara, said it would investigate the matter. He told SowetanLIVE: “As the new owners and managers of this newspaper, we take the claims made by Mantashe, which ostensibly happened before the paper was bought by Fundudzi Media, very seriously.”

Meanwhile, the SA National Editors Forum said it would Sunday World’s own investigation into what transpired, “including their commitment to fire journalists if there is concrete evidence of them taking a bribe and ensuring that all their journalists sign pledges to ensure ethical journalism”. It would also write to Mantashe to ask that he reveal the names of the journalists involved.

Executive director Kate Skinner said Sanef would add a specific clause to Sanef’s ‘draft rules of engagement’ with political parties to call for politicians to support an outright ban on any form of ‘brown envelope’ journalism.

Meanwhile, the Democratic Alliance said it would request an investigation by Parliament’s Joint Committee on Ethics and Members’ Interests into claims Mantashe paid journalists at Sunday World to bury the story.

He was quoted in the Sunday World story saying: “Two journalists from your publication called me for the same story. So, you are the third person to call me for the same story, do you also want money? I paid them and now you are calling about the same story. Every time I asked them when they will publish the story, they told me the evidence is destroyed. I begged them not to write the story, I paid two journalists at your publication. I will not reveal their names, you can ask amongst your colleagues and ask Lerato to tell you their names. You can go ahead and write the story, that is my comment.”

The DA said that by admitting to paying off two journalists, the Minister did not act in accordance with Parliament’s Code of Ethical Conduct. “If one is ethically comfortable with giving a bribe, it begs to question whether the same individual would find it ethically permissible to accept a bribe? This becomes worrying when it becomes evident that the individual at the cornerstone of such claims is in charge of South Africa’s nuclear plans, mineral resources and energy,” the party said in a statement.

It also said South Africans deserved “a free and fair media, which provides unbiased content free from bribes and corruption”.

Sanef recently launched an independent inquiry into Media Credibility and Ethics, chaired by retired Judge Kathleen Satchwell. The public is encouraged to submit evidence of journalists acting unethically or illegally to send submissions to: panel@mediainquiry.co.za.

*Story updated at 2.03pm with comment from the DA.