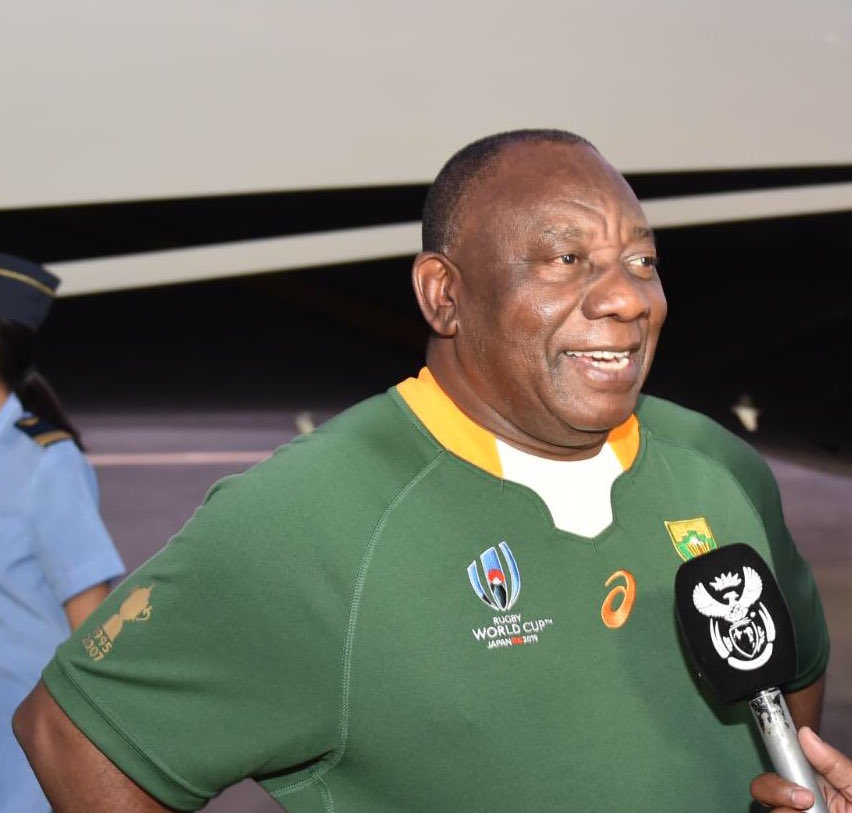 South Africa is emerging from a disastrous decade under the presidency of Jacob Zuma. The Zuma years crippled the economy and battered the country’s state-owned enterprises. Amid the relentless exposés of intractable corruption, politics became increasingly divisive and racist. There was very little cause for celebration.

But on Saturday South Africa’s national rugby side, the Springboks, will take on England in the Rugby World Cup Final at the magnificent International Yokohama Stadium in Japan.

Making it through to the finals has raised extraordinary passion in South Africa not seen since the country’s last victory in the World Cup in 2007. Even that was not a patch on 1995 when, emerging slowly and painfully from apartheid, the country saw its newly elected President, Nelson Mandela, don the ‘green and gold’ Springbok rugby jersey to watch South Africa play – and beat – New Zealand’s All Blacks, at Ellis Park in Johannesburg.

At the time the country was hailed as a miracle nation, full of hope and promise. South Africans were aspirational. They had, despite all odds, achieved a negotiated path to democracy. Mandela rightly perceived that sport could be the vehicle for unity and nation-building for a deeply divided society. Intuitively he knew that – at that moment – rugby success could capture the zeitgeist of the country’s nascent democracy and make the dream of the “rainbow nation” accessible.

Archbishop Desmond Tutu, the Nobel Peace Prize winner, coined the term to symbolically describe the fusion of South Africa’s diverse ethnicities, cultures, creeds, languages, flora and fauna. This was a magnanimous gesture of reconciliation and forgiveness after the years of deep-rooted racism and brutal exclusion by the apartheid regime.

On the bittersweet day of celebration, there was a sense of national unity. It was extraordinary given the very painful and humiliating legacy of apartheid which included the fact that talented players were denied places in national teams purely on the basis of their skin colour.

The mood is very different now. South Africa’s young people are angry about the slow pace of economic transformation in the country. They feel betrayed by the architects of the 1994 negotiated settlement that they view as having robbed them of the opportunities to participate fully, meaningfully and productively in the economy.

If ever South Africa needed another such Mandela moment, it is now. The country needs hope, not fear and humiliation, to forge ahead. South Africa is at a critical juncture especially given the bleak economic outlook. A victory moment has the potential of re-kindling the flame that made reconciliation attainable and even believable in 1994.

Why the time is right

South African President, Cyril Ramaphosa, is an adept and wily political leader who must know that the timing is right for a moment of unity and a show of solidarity across the fractious country. He has already announced his intention to be at the Yokohama Stadium to lend his support to the South African squad and their skipper.

As president in the post Zuma years of divisive, racially charged political and economic crises, he has a consistent message of national cohesion. In that respect he brings the same sense of Mandela calm that the country desperately needs.

In intimations of Mandela’s famous surprise visit to the rugby squad back in 1995, Ramaphosa had a moment via mobile phone with the captain of the Springbok side, Siya Kolisi.

The exchange was poignant because Kolisi is the first black captain of the national side. In addition he’s leading a squad that has 11 players of colour – the most ever selected by South Africa.

The message Kolisi and the composition of the team sends is of strength in diversity – with the slogan #strongertogether. For many South Africans it epitomises what a transformed, democratic South Africa is capable of achieving. They provide an inspiring moment, particularly for young South Africans, in a country in short supply of heroes and ‘feel good’ events.

Like many players of colour, Kolisi began his rugby career on the dusty playing fields of a school in a poor black residential area in Port Elizabeth, in the south east of the country. He was then nurtured at a school that’s been an incubator of prominent rugby players for decades. This elite institution was a school for only white pupils under apartheid.

Some South Africans are critical of the fact that talent still emerges almost exclusively from these institutions. The emergence of young black players through these institutions is seen as assimilation into apartheid sport.

My view, however, is that the trend should be seen through the lens of international rugby where elite schools, professional rugby academies and tertiary institutions also nurture raw talent. This isn’t peculiar to South Africa.

Many South Africans, myself included, hold onto the hope that a win in the World Cup will translate into another defining moment for the country. I believe that it would generate the new, aspirational stories of youthful courage and resilience that the country urgently needs.

At the societal and cultural levels, nations like South Africa can build ‘voice’ – new stories – by breaking the ongoing cycles of humiliation, prejudice, and violence through the transformation of destructive historical narratives. This would provide a break with the inflammatory, divisive speech that leaders in South Africa, and in a host of other countries, use to garner cohesion and solidarity.

American professor of international peacebuilding John Paul Lederach calls this “re-storying” history – conflict transformation processes that involve paying attention not only to the past, but also to the potentialities of the present and future by thinking beyond what currently exists.

The World Cup final could prove to be just such a moment.