How SABC News’ OB units prepared for broadcast during Covid-19 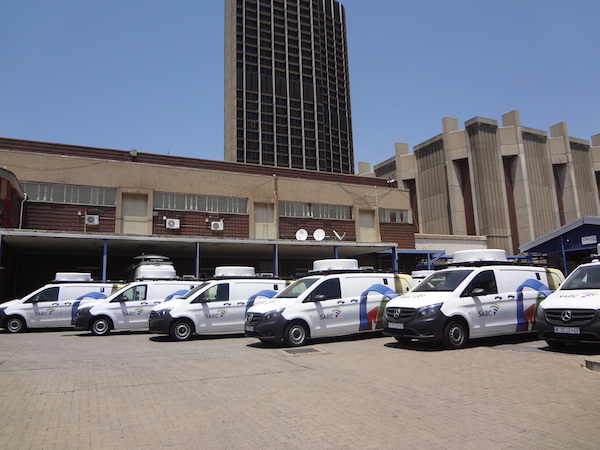 Kagisho Maesela, SABC TV OB’s principal technician, understands how some colleagues may have thought the workload for technicians would be reduced during the lockdown period, considering that many productions had to be cancelled due to the global pandemic regulations on social distancing.

On the contrary, Maesela and the OB team became very busy.

“We were caught off-guard”, says Maesela. “Actually, we were never ready for such a drastic change. We therefore had to quickly adapt to new ways of broadcasting.”

He explains in detail how SABC News’ determined attempts behind the scenes ensured presenters and field reporters were ready to meet the challenge and fulfil the SABC’s mandate.

“One of the biggest changes SABC News viewers have seen during the national lockdown has been presenters, guests and reporters appearing on TV from their homes. The SABC presenters and reporters have been adhering to the social distancing guidelines set out by the government. But this brought a challenge which allowed us to use all the available technology to deliver the news from a reporter/presenter’s home,” comments Maesela, acknowledging the state-of-the-art equipment the SABC prides itself on, which he believes had previously been rarely used, perhaps due to resistence to change.

“We had about two weeks to prepare our broadcast disaster recovery (DR) site at Nasrec and ensuring that we equip the facility with some remote capability – responsible for bringing all live content into Nasrec, so it was imperative that we could continue to operate with remote or restricted teams,” he says.

Maesela has, from the outset, been involved in getting the Nasrec-based DR site set up with remote capabilities; that is, duplicating the master control room (MCR), line record, edit suites, production area and the studio capabilities to ensure continuous running of the SABC channels in case the SABC main offices stopped operating.

“In conjunction with Virtual Private Networks (VPNs), remote access software is allowing us to access equipment in the studio, whether for command and control, or to let remote machines do the heavy lifting that a laptop might struggle with, such as video transcoding”, he says. “And of course, we’re continuing to make use of  DMNG APP (Digital Mobile News Gathering ) and MojoPro apps, to enable our presenters and reporters to make live contributions/recording/editing and forwarding files either from home or if social distancing is forcing them to work independently.”

Maesela explains how the SABC teams are using the DMNG APP, MojoPro, LiveU and DMNG Pro bond cellular and wi-fi connectivity to maximise the available bandwidth to offer some robustness, which is key when many network lines are experiencing much more traffic than normal.

“All these units are set for the lowest possible latency – MojoPro, Safe Streams Technology (SST) return links etc.” Maesela adds that the huge demand of apps such as MojoPro, DMNG APP, etc., has been a challenge, since all the new users needed to be trained (he could only train them remotely) and increased remote technical support has become a new normal.

Emphasis on monitoring, as part of the remote technical support Maesela had to offer, indicates the added effort he had to put, as he considers this as the bigger part of this exercise:

While many people struggle to work from home, Maesela feels at home working anywhere, with his tools. For him, “working from home is similar to delivering an outside broadcast anywhere; it is a familiar territory.”

In his humble manner of expression, Maesela says, “I forever remind myself that all I do is in the interest of the SABC and the public that we serve. The fast-paced environment in broadcasting keeps me on my toes, as I get to analyse patterns of imperfections. I need to know what could be causing a decline in picture quality (something that could deter viewers to flip to alternative channels).

“I analyse the performance of the bonded cellular networks, performance of the firewall, video drops and audio drops (I gather all this information to improve the systems). Remote training I offer serves to ensure a smooth broadcast. Now that I have been working remotely, I am helping to roll out the remote broadcast capabilities to other teams by providing remote training and also give technical support to the teams.” He stresses how his Internet Protocol (IP) broadcast skills have been honed during this lockdown period.

ADSNG engineer, Khutso Matlala was as keen as he was devoted when he asked the Denis Goldberg Legacy Foundation if they would allow the SABC to take control of the Denis Goldberg Memorial by producing it, using the facilities at the Disaster Recovery Site in Nasrec, Johannesburg.

What Matlala had planned was to combine the traditional ways of doing TV with the virtual communication platforms that are currently used, and have become popular under the Covid-19 conditions. He believed that this would be an exciting challenge for the technicians and director to put together, and that the Nasrec set-up is well equipped in terms of physical and human resources.

Matlala explains how three computers in the OB van were used to provide video feeds to the video mixer from the Google Meet platform which The Foundation used at their meeting platform. One more computer was used to send the family members the Live TV feed so they could follow and communicate with the Technical Co-ordinator. All the archived footage, video and audio tributes were played out from the OB van instead of playing them from the individual computers on the platform.

This was to avoid the uncertainty of fluctuating network bandwidths which could degrade the quality of the footage being streamed. The MC of the Memorial had to be in the Sea Point-based SABC News Studio. As she was going to be the one that appears the most, being there was to ensure the outcome would be of great video quality. This feed too was sent to Nasrec.

Matlala’s role on this production was that of technical co-ordinator, technician and producer. He radiates with joy and satisfaction at being part of it and seeing what could be achieved with the resources available. Thinking outside the box got him digging deeper in terms of what the equipment could do for the teams during lockdown period. Lockdown expedited disaster recovery plans, including remote broadcasting where virtual platforms are being used for broadcasts and meetings.

Confidently, Matlala says, “Lockdown has also gotten us closer to other departments in terms of working relations and understanding their workflows even better.”

During the build-up to lockdown, Iqbal Hoosen, an OB Unit supervisor then, was part of a team tasked to set up the OB units at the DR site, a set-up that was to be a standby studio in the event that the SABC Newsroom was inaccessible for lives broadcasts.

Hoosen recollects how much uncertainty there was around the use of this set-up. He attributes the heightened uncertainty around navigating the uncharted waters the team found themselves navigating in setting up for a National State of Disaster.

“Working together with SABC Teams (IT, OB Links, News Technology, Henley Set-builders, OB lighting and OB core crews) enabled us to have the facility set up in a matter of two-and-a-half days before lockdown. This enabled the teams to be creative and think from a new perspective,” he says.

Hoosen’s role as OB technical manager, currently in an acting capacity, has given him the opportunity to be involved with the planning of the upgrade of two of the public broadcaster’s oldest OB vans, OB5J HD and MPU1D.

Sounding enthusiastic, Hoosen says, “We are hoping to upgrade to the latest IP technology which will, in the future enable us to achieve remote broadcasting. This is however still in the planning phase. Now with the COVID-19 regulations in place, we now have to design our new OB vehicles taking into consideration social distancing.”