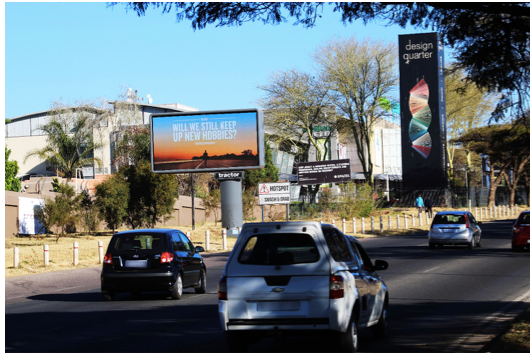 [PRESS OFFICE] Tractor is one of the many proud media owners to take part in the #oursecondchance global campaign by New Commercial Arts.

A campaign on a global scale is a first for New Commercial Arts, recently founded by adam&eve founders James Murphy and David Golding with Ian Heartfield from BBH and Rob Curran from Wunderman Thompson.

“This was a big brief from a major international organisation and a terrific opportunity for the agency to demonstrate its capabilities in a medium we love on a global stage at a pivotal point in time,” says Heartfield, New Commercial Arts’ chief creative officer.

The campaign is running for the duration of August and is being supported by the National Trade Associations and out of home media owners across the world in Europe, North and South America, Africa, Asia, the Far East including China and Australasia. Grand Visual is handling campaign production and distribution.

The campaign launched on Monday 27 July, and according to World OOH News, as of 11 August there are 163 media owners and other companies contributing in 49 countries. The posters are appearing in eight languages and so far, there have been 2 216 asset downloads. The campaign is on track to be the biggest out of home campaign ever with new media owners joining all the time.

“Our Second Chance reflects the new post Covid world, in a non-partisan way and highlights the opportunity it gives citizens across the world, to consider their priorities and aspirations,” says WOO President, Tom Goddard. “New Commercial Arts has produced a stunning campaign that shows the Out of Home industry at its best and most striking: a reminder to advertisers and agencies that, as the world re-opens for business, Out of Home remains the only true global broadcast medium.”

Tractor Outdoor’s managing director, Ben Harris, says the company is extremely proud to be part of yet another special global campaign which unites media owners around the world. “DOOH has played a vital part in how we support our communities and people pre and post-Covid and its shows how powerful DOOH can be, but on a global magnitude.”

Alongside the massive DOOH campaign will be a major social initiative with the hashtag #OurSecondChance deploying Twitter polls to explore consumer attitudes to the choices and opportunities presented in a world changed by Covid-19.

Tractor Outdoor was founded in 2001 by international industry veterans and is managed by a team who has a comprehensive grounding in the outdoor media industry. Tractor has positioned itself as the preeminent outdoor media company within landmark geographic areas in South Africa.

Tractor is well-established and growing, with a spectacular project record of providing desired results to advertisers. Their OOH offering includes billboards and digital screens located in key markets, a transit division; and an innovation division to integrate your bespoke OOH campaigns nationwide.