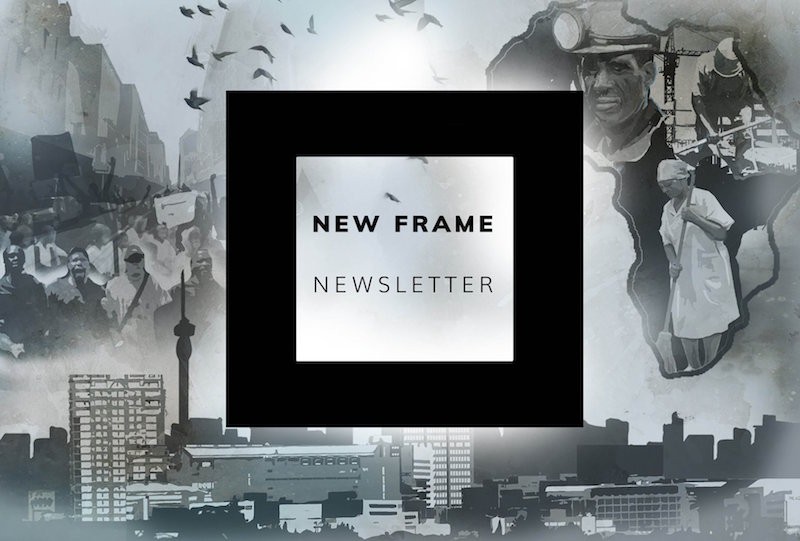 New Frame has just turned two years old. The not-for-profit social justice online publication was developed after editor in chief Richard Pithouse “began to think more seriously about what a useful alternative to both ‘fake news’ and the mainstream media might look like, and what intellectually serious and credible work that is not hidden away in academic journals and written in stolid prose might look like”.

It was when the rise of ‘fake news’ circulated on social media enabled the rapid rise of right-wing politics in much of the world, and was used to try and defend the repressive kleptocracy that festered in the Zuma years, that Pithouse “increasingly came to see the media as a terrain of critical importance for the possibilities of democratic politics. These are the indelible impressions that spurred action – firstly by contributing labour to the work done by Niren Tolsi, Pravasan Pillay, Percy Zvomuya and others on The Con, and then by working with others to roll the dice with New Frame”.

An academic, Pithouse had written for newspapers, initially about music but later, about politics. “As a writer I’ve often found publications explicitly uninterested in the stories I have most wanted to tell. For instance, editors often loved stories attacking Jacob Zuma, but had little to no interest in a story on something like the assassination of a grassroots activist,” he says. “At the same time, I’ve worked in and with many grassroots organisations and struggles of different kinds.”

It was this experience, the “juxtaposition of these three different locations from which to understand the world” that engendered in him “a progressively deeper cynicism towards much of the academy and the media”.

Pithouse is clear that there is excellent work being done in these spaces, but also “a lot of work that reinscribes a set of pernicious prejudices against the majority of people in our country, and against forms of organisation and struggle outside of formal politics”.

Newspapers and academic journals, he adds, have also often – perhaps it might be correct to say routinely – published things that are simply not true. “In some cases, they have allowed themselves to manipulated into doing so, and in other cases they have done so as a result of a lack of seriousness about distinguishing facts from assumptions – assumptions that are frequently prejudicial,” he says.

Starting a new media publication in seriously tough times for the media industry as a whole was always going to be a big ask, but Pithouse says that with “sufficient trust with sufficient people a lot can be achieved”. He stresses that everything New Frame has achieved comes out of the collaborative work of an excellent team.

What was difficult, he says, was getting really good writers and photographers with whom there was no existing relationship to offer their work to the project as freelancers. “But once we launched, in our news editors’ kitchen, this quickly became much easier. This was helped by both the evident quality of the work, and that we always made sure that we paid freelancers on time,” he adds.

The business model, Pithouse explains, is based on looking for upfront support to get going, then building credibility and a readership, and then asking that readership to support the publication thus ensuring its sustainability. “We took a wager, which is that if we produce work of high quality, and real credibility, enough people will come to value it for it to be able to continue. For this reason, we avoid rushed or sensational stories that may generate ‘clicks’ in the short term, but will compromise the publication’s credibility in the long term. We also avoid using writers who are compromised in some way. We’ve bet everything on quality and credibility and, in the end, we hope that striving to achieve these two things will enable sustainability. But that’s a hope, not a guarantee.”

Nevertheless, New Frame simply cannot rely on the existing reading public to support it. Much of the existing middle-class audience for media, he says, and other actors that are able to support media, “may well appreciate our focus on credibility and quality, they will not all appreciate our commitment to social justice, and our commitment to strive to write, photograph and illustrate outside of the prejudices against the majority of people in our country that saturate much of the elite public sphere”.

It’s a serious challenge building a “new public”, with no guarantees of survival, but Pithouse remains convinced it’s worth trying. “Our foundational ethical commitment, to which we strive to hold fast, is to the equality of all people,” he says.

Talent, of course, is a key element. “New Frame was largely put together with a mixture of people that I knew, people that I found by having endless coffees with likeminded people who have been in journalism for a long time, and people that we found through advertising,” says Pithouse.

“I also went to people that I respected and trusted in all the journalism schools in South Africa and asked them to recommend their best students to me. I then met the students who were recommended and discussed the project, which at that stage did not yet exist, with them.

“Interestingly I only found two people this way. Many of the students in the journalism schools that I spoke to made it clear that their immediate ambition was to became famous, and successful in entirely mainstream ways. I found very few people in the journalism schools with real intellectual curiosity, with a genuine passion for writing, and in interest in telling the stories of the majority,” he says. “I remember very well the look of absolute horror that flashed across the face of one of the students that I spoke to when I asked her how she would feel about writing a story on a public hospital in rural Mpumalanga. The two exceptions, where I found excellent people, were Wits and UJ.”

New Frame has mainly lived up to his expectations, Pithouse says. “But, of course, there are many stories that we haven’t told, and whole areas of urgent concern that we haven’t touched on or adequately developed. The environment is one of these areas. We also need to do a lot more to give some voice to the rich array of different forms of grassroots politics in South Africa. There are extraordinary people, doing extraordinary work, many of them women, who seldom appear in the media. But there are areas where I think that we’ve done very well, such as police violence, the taxi industry, labour and xenophobia”.

Quality is the underlying principle. New Frame journalists take time to do stories, and great care is taken to edit the material carefully. But the prejudices that saturate our society, he says, are so profound that people have often been actively taught that repeating them is good journalism.

“Trying to move away from these prejudices is often like trying to brush an elite common sense against the grain. It’s not always easy and we often don’t achieve as much as we can,” Pithouse says. “In this respect all we can do it to commit to a permanent striving, and to work to create an intellectual serious environment in which we can discuss stories and issues seriously – and in dialogue with trusted and respected experts outside of our newsroom. We run regular workshops aimed at improving the way we cover various issues.”

Pithouse says the broken old media model, which often had profound biases towards elites of various kinds, has given rise to alternatives, which have made a valuable contribution to the media sector. “But there needs to be a wide ranging and serious discussion about how a democratic public sphere can be built and sustained. New Frame is an intervention in a period of crisis for the media, but it, and other projects like it, cannot be the solution,” he says.

“I don’t know that the solution could be but suspect that it may involve heavy taxation of social media companies to subsidise independent media, with firm guarantees of editorial independence mediated through credible intermediary institutions. Of course, this is not easily achieved. These companies are among the richest and most powerful in the world, and if they were taxed to cross subsidise independent media it is not clear how the integrity of this process could be guaranteed.”

Sandra Gordon is deeply schooled in marketing, with experience in media, advertising, branding, communication, public relations and publishing (print and online). Currently CEO of the Iconic Group, a savvy collection of entrepreneurial companies offering services across the marketing and communication spectrum, including Stone Soup PR. She is the former publisher of The Media Online and The Media, and founder of the MOST Awards.