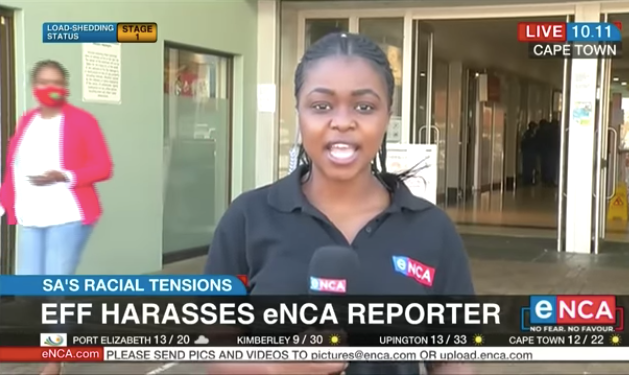 The South African National Editors’ Forum (SANEF) wants EFF member Mbuyiseni Ndlozi to apologise to eNCA journalist Nobesuthu Hejana and the women of South Africa for his misogynistic comments. Ndlozi in his statement condoned the harassment of the female journalist.

SANEF also wants the Gender Commission and Parliament to investigate the matter.

Ndlozi tweeted in part, “That merely touching her is not harassment. The touch has to be violent, invasive or harmful to become harassment.”

Ndlozi was responding to a video showing eNCA journalist Hejana being harassed and intimidated by EFF supporters protesting outside a Clicks store in Goodwood mall on Tuesday.

“While it is unacceptable for anyone to be touching another person without their consent, in a country like ours, with alarming cases of gender based violence, it is horrifying that a member of parliament finds it okay for a group of men, to be harassing a woman,” SANEF said in a statement.

“It is equally horrific that Ndlozi thinks it is okay to tell women what constitutes harassment.”

The industry body said it was ironic that the incident happened during a protest by EFF, fighting for the dignity of black women and they themselves harassed a black woman.

Political reporters in particular have also decried newsmakers commenting about the size of their bums and breasts, hitting on them and telling them what they should wear when coming for an interview.

Read more: Sexual harassment in the media, yet is is a thing

Read more: Lifting the lid on sexual harassment of journos by govt officials

Read more: The hidden threat against women in media

SANEF said all male and female political leaders should urge their supporters to respect women journalists and allow them to do their work in safety, free from intimidation and harassment.