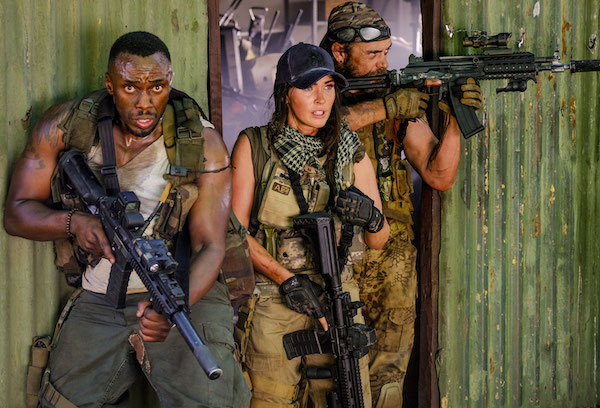 [PRESS OFFICE] Showmax has just released Rogue, starring Teen Choice winner and People’s Choice nominee Megan Fox (Transformers, Jennifer’s Body) as Sam O’Hara, who leads a team of mercenaries on a mission to rescue an ambassador’s daughter kidnapped by Al-Shabaab. When their plan goes south, the mercenaries find themselves out of ammo and hiding out at an abandoned lion farm, having to defend themselves against both the kidnappers and an angry lion.

While Megan has turned down numerous military films since Transformers, she accepted Rogue partly because of the attraction of coming to Africa. “I felt like my life was going to change going to Africa,” Fox told New York Daily News. “And I didn’t know why; I just knew that I had to do this project for some reason.”

The decision paid off. “Megan Fox in Rogue redefines her reputation and career,” says Refinery29, who add that the film “straddles the two phases of Megan Fox’s life: her early days as an action star too often used as a prop for the male gaze, and her future as a woman taking charge of her own destiny…”

As Basset told Refinery29, “[I wanted] to make Megan credible, rather than this sex object that’s she so frequently used for by male filmmakers… I said, ‘There’s no romance in here; you’re not wearing skimpy T-shirts or short-shorts. You’re carrying full battle rattle, and I’m going to expect you to get dirty and bruised.’ She was quite excited by that, to be honest.”

While ultimately an escapist action movie, Rogue also spotlights the abuse of lions in Africa. “This film is fiction,” says Basset, who wrote the movie as a passion project with her daughter, Isabel, who has a cameo in the film. “But the facts are that in 2019 there were over 12 000 lions in ‘farms’ in South Africa. Though this is legal, most are being kept in appalling conditions before being killed for their skins, bones and other body parts to supply traditional medicine markets. Cubs are bred and used for petting zoos until too old to handle before being shipped for slaughter or used in ‘canned’ hunting. It is a disgrace and should be stopped.”

As The Guardian wrote about Rogue, “If hit Netflix documentary Tiger King had you championing the big cat cause, here’s the animal rights-respecting action-thriller you should watch next…” They called it “an energetic action thriller” where “the action rattles along”.

The SA-UK film is a co-production between MultiChoice, Capstone and Mannequin, with Lionsgate Home Entertainment handling distribution in North America.

About Showmax
Showmax is an internet TV service. What sets Showmax apart is a unique combination of hit African content, first and exclusive international series, premium documentaries, and the best kids’ shows. Showmax Pro adds music, news and live sport from SuperSport. For a single monthly fee, get unlimited access. Start and stop when you want.

Showmax was born in 2015. Showmax and Showmax Pro are available in sub-Saharan Africa. A Showmax diaspora service is also available in selected markets worldwide. For more information, click here.