Seven days on Twitter: Trouble with the law? Pull a Zuma 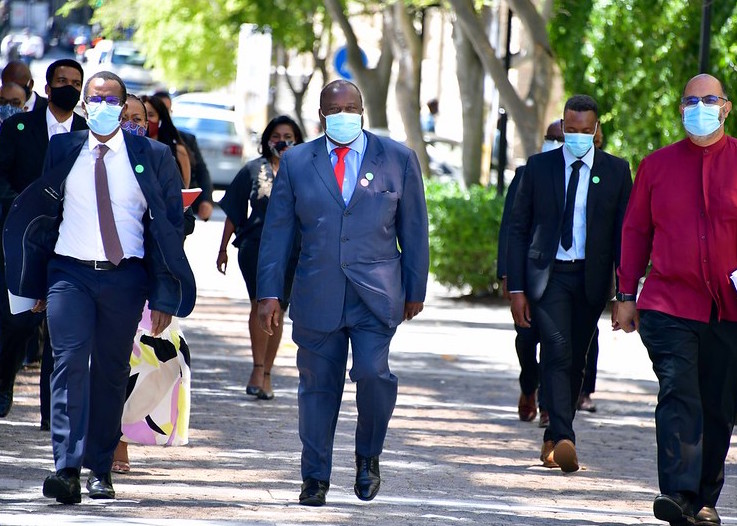 I laughed a lot this week as the country tried to wrap its tongue around the new names for PE and surrounds. No one can pronounce them; when I say no one, I mean white people.

Look I get it, no South African place should carry the name of the British Queen Elizabeth; she’s the same person who chucked out her daughter in law because she didn’t have a lily-white gene pool, but while we’re busy putting up road signs, Minister Tito #Mboweni was standing in front of parliament giving us a damning report of the state of our country’s finances.

Trillions in debt, (you don’t even want to know how many zeros that is) and it’s as if he was talking in a vacuum because when he said no more funding for ailing SOEs, SAA launched a vanity flight to pick up our vaccine in Belgium. This was such a blatant and expensive PR stint to stay relevant that it made me feel sick; let’s hope it’s their swan song.

In the #BudgetSpeech, #Mboweni also said the #StateCapture commission will not get further funding. I’m not surprised. What’s the point if there is no justice? We have now learnt that when the jig is up you simply pour a cup of chai and add honey. If you’ve been following my blog, then you’ll know I’m a massive fan of #DCJRaymondZondo, but if the purpose of the commission was to establish if there was #StateCapture then I believe the answer was “yes” about 144 witnesses ago.

#Zondo is so brave, he has unravelled a bunch of dirty politics, (not that there is any other kind), that got so close to the centres of power, it simply cannot continue. Firstly, too many people are implicated, both in the political and corporate world, and secondly if you #PullAZuma, no one will be held accountable.

The entire enquiry rests on the arrest of #Zuma but because of his blatant disregard for the #concourt ruling, the commission has literally lost its power overnight. If our current President doesn’t act there is simply no hope as crook after crook will #PullAZuma as the precedent for their ill-gotten gains, regardless of damning testimonies and forensic evidence.

My thought process wasn’t even verbalised when #AuswellMashaba #PulledAZuma by failing to appear at the commission for the PRASA debacle. #Zondo issued instructions to lay a criminal complaint, and he made the questions public so that we could see why #Auswell hid under his bed, the answer to those questions… R3.5 billion.

Last week I struggled with both power and internet connectivity, hence I haven’t spoken about Minister Bheki Cele. He walked into a venue and then walked out without a person in handcuffs. The way I know #Cele, when he goes anywhere, people literally beg to be arrested. #Cele doesn’t take nonsense, but it seems that the tea at #Nkandla is far too sweet.

It’s so sweet that the #Top6 (read #Ramaphosa) are not welcome at #Nkandla. Imagine refusing a meeting with the President of your country?  Unfathomable, so very #zuma.

Then the bomb drops this week, #ZweliMkhize is implicated in R82 million tender fraud. I’m gutted, et tu #Zweli? I really hope it’s just politics and it’s not true but if it is, I suppose I shouldn’t be surprised, because everyone involved in politics eats from the trough, that’s why you can “Pull A Zuma” because there are small nyana skeletons everywhere.

Talking about small nyana skeletons, (a phrase coined by no other than #BathabileDlamini), she also #PulledAZuma this week as she won’t pay her legal bill as directed by #Concourt. This is the bill for the social grant crisis when 10 million people struggled to get critical bread money.

Still on pensions, #VBS sues #KPMG for R864 million because the auditor allegedly bagged a bunch of the cash. The crooked suing the crooked, yip that’s where we are guys while the frailest of our community are put in the firing line.

The #WeddingPlanners were not the only horrific #corporateSA story this week. There is one story I don’t understand at all, can someone please explain to me what on earth is going on with #Steinhoff? The biggest theft of money since #MoneyHeist hit Netflix, if I’m reading right, #ChristoWiese is set to earn R7.9 billion as a pay-out.

I’m sorry WHAT? Pay-out? How is this possible, can someone call #Cele and put those handcuffs to use? White Corporate Privilege at its finest.

Talking about white privilege #JacquesPauw churns out rubbish and then blames the booze as he expects us all to suck up the lashing he gave to credible journalists by being using poetic license as a senior investigative journalist. The last time I checke, Jacques, whiskey doesn’t write itself, and you really should know better. You put the credibility of all great journalists in the spotlight; you are a shame on your craft.

There were two big wins for women this week as both #Danlingozi and #TsegofatoPule’s murderers face 20 years in jail. Is it enough? Of course not, but we will take it. I wish they’d just hang one of them, just one and you’ll see the tide turn.

What can I tell you to cheer you up? The #Bushiris are taking Malawi to court; funny right, but not funny at all. Class of 2020 achieved 72% pass rate, (hate to say it but I don’t believe that number) but hey ho, let’s take the good news.

Niehaus and Mbaks had a banter on Twitter. I think they were both at the #JacquesPauw keyboard because I couldn’t make out what they were saying. And then the #JerusalemaChallenge’s Master KG hits back with copyright claims for the international sensation record time. Do you think #Ramaphosa should pay that bill as he told us all to do the challenge? You can’t make this stuff up. Good on ya #MasterKG you deserve every penny friend. Luckily, I can’t dance 😊

Oh, before I go, this is going to make you laugh: Coca-Cola US held a meeting with its white staff to teach them how to “be less white”. I’m not making this up, they had a presentation on how a white person should act around people of colour.

Not that Pepsi as they held similar initiatives. Hey Coke USA, give a South Africa a call, we are way ahead of you in the race conversation. The worst bit is they don’t really think they’ve done anything wrong when their slides read: “The tips to ‘be less white’ included: “be less arrogant, be less certain, be less defensive, be more humble, listen, believe, break with apathy”, and “break with white solidarity.”

It’s the weekend, don’t share a coke, tap water is good! Also don’t touch the booze if you’re going to use a keyboard. These are solid words of advice.