Seven days on Twitter: We need a president, not a party leader 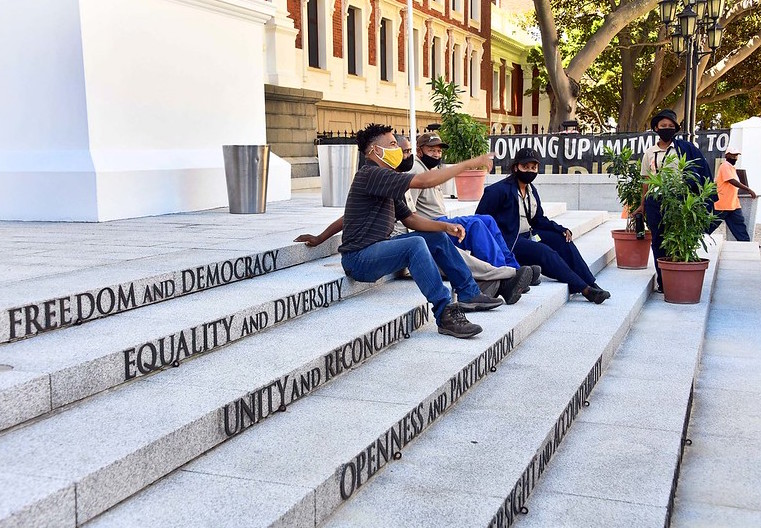 Activities around parliament ahead of the 2021 State of the Nation Address by President Cyril Ramaphosa in Cape Town. [Photo: GCIS]

This week began with #Ramaphosamustfall and #MatamelaMustGo. These hashtags came the day after the #NkandlaTeaParty, so it was obvious #PaidTwitter was out in force.

Their mandate, the #Astrazeneca #Vaccine. Maybe it was just me, but it seemed like the whole thing from helicopter to expiry date was orchestrated.

Personally, I was furious about the time and money wasted on a vaccine that doesn’t work for 90% of our country and then my fury changed to dismay as the #TwitterBrigade asked us to compare our reactions if #Zuma had done the same thing. Professor ‘Slim’ Karim filled my mainstream media within 24 hours telling me so beautifully and eloquently with a twirl of spin, that it was fine that we spent that money and lost those lives in the queue.

His message sounded like an incredible #JohnsonAndJohnson advert. Am I being over critical? I know most of you think that the Professor is a darling, but he makes me feel uneasy. I hope I’m wrong. I wanted to speak to the man in charge (ha! #Karen); it was at that point that I realised we needed a President not a Party Leader.

Think of the week #Ramaphosa must have had, watching #Julius turn up at #Nkaaaandlaaa (the very place that the CIC called the “monument of corruption”) in a flashy helicopter with a bunch of ‘colleagues’ that you would need if you’d done something very, very bad and even then you’d rather face your punishment than be owned by these guys.

The President hears the news that the #ZANC has a trump card, a wasteful order of #Astrazeneca; to be fair, there are many trump cards in the #ANC’s history, so this was just another one. Here sits #Matamela surrounded by fraud and corruption, a #Zondo commission that cost millions hingeing on one man’s defiance of the Constitutional Court and a Top 6 that completely immobilises him.

Come on! Rise above the party #MyPresident, it’s time, or I fear it’s over. Call a referendum, pay a huge fine for the part you played in the last 10 years, build a city filled with houses, you owe it to us, and put those builders on your personal payroll. We will forgive you. We forgave apartheid for heaven’s sake, #RiseMatamelaRise.

The alternative, of course, is that we will be stuck with #DDMabuza. What a terrifying thought.

All this made me turn on #Sona, praying that this massive discourse in our country would be met with some great show of force. But no. Just a side swipe about the corrupt paying for their sins and a bunch of #fynbos that must be scorch with flames every 20 years; oh my precious #CyrilRamaphosa, we have been burning for decades and we are made of flesh and bone and can’t survive on barren ground.

#WeAreNotFynbos. You can’t blame #Covid for that, that is our government’s history. I still maintain that #Ramaphosa is playing a game of chess, but I fear this maybe #checkmate for our country. It’s time for a #President #CyrilRamaphosa, not the #ANCPresidentRamaphosa.

#Sona went on to address #Landreform (yawn) #BEE (double yawn), the new vaccine (I might fall asleep), unemployment at almost two million (sits bolt upright) but it will be fine soon (what?), the government is going to ‘hand out’ another R350 for a person to live on a month.

And to wrap it up? #MayaAngelou, one of the most incredible writers of our time. I was more struck by the lack of #EFFDisruption, #ShutUpYouSteenhuisen and big hats. It was eerie to see the red carpet empty and only 30 odd members in the house. I quite liked it. I got to bed before 10, no pomp and ceremony and we saved a lot of cash.

#NastyNedbank got caught by #amaBhungane in a file drop that would make Kim Jong Un proud. The level of genius on this fraud case is astonishing; in fact all fraud and corruption makes me marvel because of the level of brain power that is used to diddle us out of cash. Imagine if they had a conscience?

We would be living in paradise. For those at the back who still think corruption has colour, please sit down. Need another example, well alright then: One of the testimonies at the #StateCaptureCommission was like a comedy show. #MarkPamensky, ex #BlueLabelTelecoms, is the most animated character I’ve seen since a #LebaneseFamilyWedding, a wide boy with a champagne pocket who talked far too much.

In fact, his lawyer tried to shut him up. I don’t mean he dropped files or anything, he just talked…a lot! Apparently, he hadn’t met the Guptas but had attended the #GuptaWedding; he needed a free trip to Sun City because he’s single but never met the couple or any of the crew while he was there… I don’t even want to go there. You can’t make this stuff up. Watch it, not because it means anything, just because it’s comedy gold.

Please can I not talk about how four children died in a quarry and how a small baby was raped. I can’t change it and I’m not going to make any impact. Just like I’m asking to you to forgive me as I won’t unpack the #Fresh #Euphonik story. I’m too scared about what I will find. Please can this story not be true? These men are meant to be role-models and leaders in their time. Come on, tell me it’s not true! They’re society’s A list and could have any array of women draped around them voluntarily; please tell me this is not true.

The most confusing thing this week was TV News straplines: is it Noma, Norma or Nomachale? I thought her name was #NOMAGigaba and now NOMAMngoma? Wow guys, can you get the name right. Kudos to her, she managed to actually do something about a corrupt #Malusi and we can’t spell her name. Well done Noma!

In other news that WAM bunch I laughed at last week had a very curious outcome, one of the #Powerof4 had a huge altercation with the police and tore masks off in his rage, and it turns out he needs a shrink, who knew?

There was so much to laugh about and drop your jaw at and many lessons were learnt, don’t use the filters on Zoom, “Cat” doesn’t look good in court. Turns out if you shared the video of the testimony of the man in Zoom Court with a cat filter you may be liable to prosecution. LOL! Which filter would you use when you go to court?

Trump’s lawyer couldn’t work out if he was acting as the prosecution or defence. See we’re not that bad here in South Africa guys? At least Zuma’s lawyer knows who’s team he is on. I say lawyer, I mean #Dali. (*hides).

My absolute favourite story of the week is from the UK, #Weetabix and #HeinzBeanz. Weetabix put out a tweet suggesting that occasionally one should replace one’s milk on the Weetabix with #HeinzBeanz. The copy was followed with a picture that will certainly make you heave. Social media giants got involved and you had tweets from most of Corporate Britain and across the world responding to the outrageous idea.

Nando’s was quick as a flash with “Are you okay, hun?” and the NHS responded that they needed a “health warning” on a breakfast like that! Domino’s wins first prize with: “Pineapple doesn’t go on pizza”, Weetabix, “Hold my spoon”. This story generated over 250k unique results.

You have so many great cheer ups, we’ve been spoilt this week and enjoy the weekend #NotFynbos.