27 Years into our democracy: A veteran journalist’s take 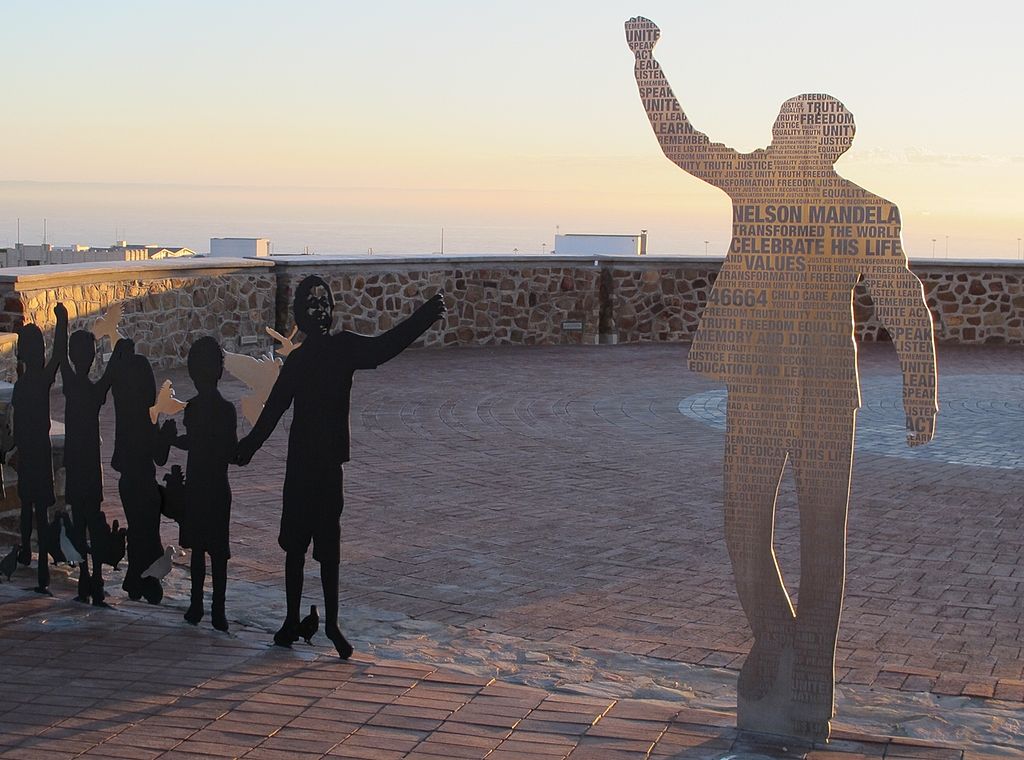 Image: The zig zag path represents the long winding queues of voters who turned up to vote in our first free elections in 1994. It was taken from the top of the Donkin lighthouse. At the top of the zigzag path is this sculpture by Anthony Harris called voters line, showing Nelson Mandela leading a line of voters/Suzi-k/Wikimedia Creative Commons CC BY-SA 3.0

South Africa’s 27 years of a constitutional democracy have been a long, tortuous, and winding journey, like the long queues that the world witnessed on 27 April 1994.

Millions of voters, of all races, from all walks of life, braved the occasion with eagerness and enthusiasm of a new dawn, marking the political end of a crime against humanity, apartheid.

It was a significant moment by any account! I cast my vote in the township where I was born and bred, White City Jabavu in Soweto. I placed my historic X on the long ballot paper at Itekeng Primary School, barely two hundred metres from my parents’ home. I had to give my vote a personal meaning, like millions of other South Africans.

As journalists in 1994, we worked under a lot of pressure amid the tension and violence. I was among the journalists covering the National Peacekeeping Force when it moved into Thokoza township nine days before 27 April. We got caught in the shooting that erupted, photojournalist Ken Oosterbroek was shot and killed that day. Several others were injured. Some of us got lucky.

On election day I drove into Soweto at 4am as a news reporter to cover one of the world’s biggest news stories of the 1990s after the release of Nelson Mandela after 27 years in jail. There was concern at the time of possible right-wing violence against voters after several bombs had exploded just two days before the country’s first democratic elections.

On 25 April, a massive car bomb exploded outside the ANC regional office in downtown Johannesburg demolishing buildings, killing nine people, and injuring 92. There was another bomb explosion at a Germiston taxi rank that killed 10 people. On 26 April there was yet another explosion at the then Jan Smuts Airport (now OR Tambo International Airport). Bombs were hurled into six polling stations around the country.

The bomb attacks were like the last kicks of a dying horse, the minority right-wing seeking to stop the elections and scupper South Africa’s march to a post-apartheid free, democratic, non-racial, and non-sexist future. They failed.

Despite the violence, a new chapter was unfolding as smoothly as possible after years of bloodshed and struggle. The National Peace Accord (NPA) of 1991 was credited for the relative peace that prevailed in the country till the elections. As demonstrated by the right-wing bomb attacks, political violence was not totally eradicated but the NPA brought together South Africans of different races and political persuasions in the making and keeping of relative peace.

When I drove around different Soweto polling stations early on 27 April 1994, the queues were long, and the excitement was palpable. By the time voting booths opened, people had been queueing for several hours. The exercise of the universal suffrage for the first time by the black majority in the land of their birth and ancestors had become a reality after the apartheid nightmare. “Freedom in our lifetime” was no longer just a slogan.

1994 marked the beginning of a so-called golden period for our country. There was Madiba Magic in the air as we reached across colour lines to reconcile after decades of racial segregation, oppression, discrimination, and injustice born out of colonialism. By 1996 South Africa adopted a new Constitution and Bill of Rights, large sections of which were inspired by the 1955 Freedom Charter of the national democratic movement.

Hailed as one of the best in the world, the Constitution’s lofty ideals remain a dream for many South Africans.

A lot of work has been done in redressing the past, racist laws have been repealed, a slew of new progressive policies has been developed and adopted, but their implementation has left much to be desired as most people are yet to fully enjoy their benefit. Tragically, corruption has become endemic, part of the socio-economic fabric. This is the greatest betrayal of all since the dawn of democracy.

27 years into democracy we find ourselves challenged by ongoing manifestations of divisions of the past. South Africa remains a country of both promise and friction. Not a month passes by without a community protest for better services. Inequality and poverty remain predominantly along racial lines with the black majority making up most of the poor. We all have the vote, the political freedom to choose our governors, but the quality of life of the black majority has not improved significantly, with South Africa now having the biggest inequality gap in the whole world, and most children and women do not feel protected by law.

Section 27 of the Constitution has become a rallying focus for protest and civil society activism over many years. This section stipulates that every citizen has the right to have access to health care, food, water, and social security. Land reform is slow with the process to amend Section 25 of the Constitution still underway to address what many South Africans view as the unequal and skewed ownership of land in the country.

The Equality Court and the Human Rights Commission (HRC) are inundated with racism complaints. Healing the divisions of the past is proving to be tougher than what the drafters of our Constitution may have hoped. The HRC is one the Constitution’s six Chapter 9 institutions that are a shining beacon in delivering their mandate.

Another light in the Constitution is about media freedom. The violence of the transition period in the 1990s might have been expected. But as a journalist 27 years into our democracy, I find it unacceptable that reporters are being attacked while doing their work. Media houses, including eNCA, have been targeted over the years. We are experiencing a rise of intolerance of different views in the media.

This is unacceptable because media freedom is one of the cornerstones of any democracy. Different points of view must be allowed to exist in a society. Journalists must be allowed to do their work freely and without fearing for their lives. And we in the media have the responsibility to ensure that what we broadcast and publish is accurate, fair and that we give everyone an opportunity to tell their side of the story.

The Constitution embodies diversity and inclusion, and we must all embrace it as the country’s “true north”.

Dan Moyane anchors ‘The Midday View’ on eNCA from 1pm to 3pm on weekdays. Moyane is a veteran anchor who has been with eNCA since June 2008.