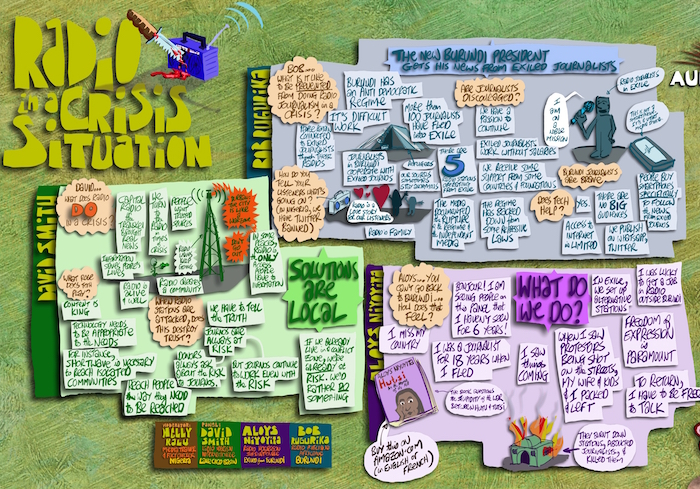 Day 7’s morning session at RDA 2021 was both topical and timely, especially in the wake of ongoing riots in parts of South Africa that saw community stations Alex FM, Westside FM and Ntokozo FM going off air after being vandalised and looted overnight.

Radio in a Crisis Situation was hosted by Nelly Kalu (media trainer and fact checker in Nigeria), and featured panelists David Smith (project director of Radio Ndarason Internationale in Chad), Bob Rugurika (director of Radio Publique Africaine in Burundi) and Aloys Niyoyita (head of programmes at Radio Ndarason Internationale in Chad) in a discussion about the role radio plays when an African country finds itself in a crisis situation.

Smith got the discussion going by suggesting that one of the first things people do in response to a tumultuous event is to turn on the radio.

“The airways do not get blocked by roadblocks and protesting,” he said in reference to the widespread broadcasting of the rioting in South Africa. He also added that the information shared on radio in the midst of a crisis situation can help to keep the wider population well informed, even going so far as to say it can quite literally save lives.

“I am somewhat in a crisis situation myself,” Kalu added to the discussion, referencing the laws that are attempting to stifle the media in Nigeria. “As a result of this, there are very few people willing to hire journalists, or to even consider setting up radio stations at this very moment”.

The already strained situation is not helped by the recent Twitter ban in the country, and the fact that Nigeria doesn’t have a landscape where people typically have a very trusting relationship with radio.

Rugurika didn’t have to convince the panel that Burundi is no stranger to this kind of political and social instability. He said it is going through a “deep media crisis” dating all the way back to 2015. Niyoyita extends this timeline to the many decades prior, mentioning that the challenging landscape in the region led to his fleeing from the region after working for 18 years as a journalist there.

“I fled because I saw things coming,” Niyoyita said. “[At the time], they came with rockets to destroy the radio stations, and strange powders to burn studios and offices.”

As can be imagined, these conflicts have meant that many journalists have lost their livelihoods over the decades. Kalu checked in with Rugurika about whether journalists “left standing” in the region are fearful in full view of the risks they face. “Every journalist still has a passion to continue,” he said after a brief pause. “Some are living without jobs, but they still want to collaborate with those media entities that are still in operation.”

This resilient attitude is the key to encouraging broader transformation, and offers hope that things will take a turn in another direction in the future. The rise of new technologies might also be able to make this a little easier across the challenging African landscape. Although different territories will have to tap into different types according to their market needs, “whatever the technology is, the content has to be credible before anything else”, Smith added.

This session showed that in spite of great challenges across the continent, radio still has a key role to play both within and beyond crisis situations. Rugurika went as far as to say that the relationship between Burundians and radio can be likened to a “love story”. Taking a more holistic view of its status on the continent, Smith suggested that major conflicts in Africa can be sorted out by the growth of knowledge, and good communication.

“Radio facilitates both of those,” he added, as the session drew to a close.

What the CEOs said

Not one to waste time or an opportunity, Mawisa jumped straight in to ask the panel about the community stations that were looted in South Africa last night.

“We have got to find ways to help stations like Alex FM get back on air,” Crwys-Williams told her. He considers the unfolding events a signal of the importance of radio during times of national crisis. Ramputswa-Tlale agreed, affirming that when stations go off air, information suffers and “chaos ensues”.

Next the discussion turned to research, which branched into addressing the importance of training and development in the sector. Hot off last week’s The Future is Female session, Mawisa couldn’t resist asking Ramputswa-Tlale about transformation in the radio sphere in Botswana. Her response echoed all of the panelists from the discussion on day 3. She said that although she is seeing gains in the industry — especially as a woman who has been in a CEO role for five to six years — “there is still so much left to do”.

Soon enough, the topic of regulation came up, just like it did last year. “We’re a highly regulated industry [in South Africa], all the way back to the mid to early 90’s,” Grubb said. “The only way to increase investment into the sector is ‘for us to be able to buy more stations and enter more territories”.

This, said in reference to the limits ICASA puts on the amount of FM licences that can be owned and operated in the country. At the moment, policy dictates that one entity can’t own more than two in total.

“We must make space for new entrepreneurs to come into the radio space in this country,” Crwys-Williams added, mostly in agreement with what he was hearing.

When asked about the commercial outlook of radio in general, Grubb acknowledged that there are big changes relative to how younger demographics are engaging with the medium. According to him, this means that “there are many more slices coming out of the advertising pie and going to different platforms”.

In spite of this, he feels optimistic that radio will endure with enough innovation. Crwys-Williams added that survival is “all about diversifying your platforms, and making sure your terrestrial content is relevant and repurposed on other platforms”.

“We’ve got to make sure that radio remains relevant, and front of mind”, he said.