#SowetanRebuild: Joining the effort to rebuild the beloved country 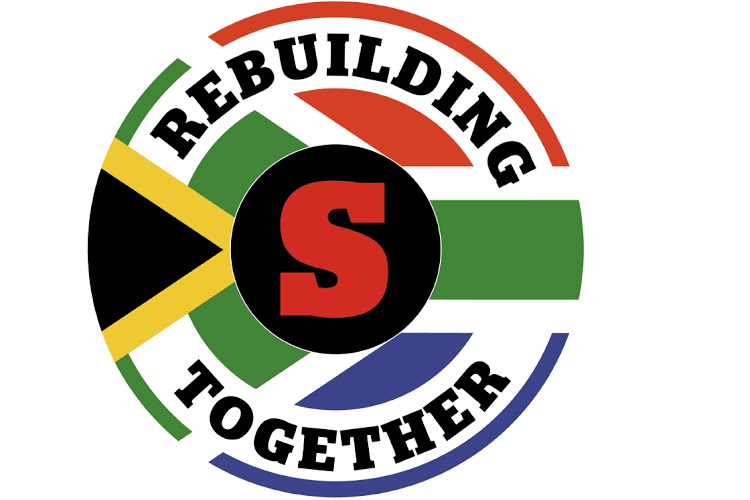 The past week was one of the darkest moments of our democracy. The well-coordinated attacks on our economy, our infrastructure and chains of distribution demonstrated the ever-present threat to our national stability and democratic order.

What makes us even more vulnerable to this onslaught are precisely our nation’s fault lines of poverty, unemployment and inequality, which the rogues exploited to cause anarchy.

Tragically, the lasting impact of it all was the demolition of businesses, in particular small enterprises built through the daily toil of ordinary citizens who were armed with nothing more than hope and a dream.

Today, many of those dreams have been shattered and hopes of rebuilding wiped out. Yet, we believe that we ought never to have let despondency define our path. While the mayhem was the work of a relative few, the project of restoration demands all of us to step up and do what we can to lay even stronger foundations on which we can rebuild.

For this reason, today we launch the #SowetanRebuild initiative, a call to action to begin the process of restoring small businesses and economic centres that bore the brunt of destruction.

We will tell stories of small enterprises which were looted and destroyed, and we call upon capable individuals, institutions and corporates to come on board to support their restoration and, hopefully, their sustainability in the future.

We invite you to make an investment that is as practical and relevant as possible to each of the enterprises or informal traders you choose to support – be it financial, infrastructural or technological in nature, the point is to provide a leg up to help those affected.

If you would like to be part of this campaign, please contact us on any of our social media platforms or email us at rebuild@sowetan.co.za

We look forward to hearing from you, our readers. Importantly, we ask that you play your part to help rebuild from the ashes.

Lawrence Tseye knew there was nothing he could do to prevent looters from making off with whatever they wanted when one of them pulled out a knife on him amid the chaos.

“All I could do was simply keep quiet and walk out of the store,” said Tseye.

As the news of looting and vandalism of business spread throughout Soweto on Sunday night last week, Thabang Madikila was alerted just before his bedtime that his small business was also not spared.

Madikila is one of number of small business owners who found their business premises broken into and pillaged at Tsele’s Centre in Moletsane, Soweto, after former president Jacob Zuma’s arrest.

Benson Nkuna, 38, of Orange Farm, south of Johannesburg, who owns Shefresh General Trading (Pty) Ltd in City & Suburban, said he is going to need equipment worth more than R200 000 to repair his workplace and open for business again after it was broken into on the evening of 11 July.

Thato Segoni and her brother Keletso used their life’s savings to open a Fish and Chips franchise eatery at Chris Hani Mall in Vosloorus, Ekurhuleni.

The risk paid off almost immediately as the shop gave birth to two other shops at Bara Taxi Rank in Soweto and at the Phumula Shopping Centre on the East Rand. This was 10 years ago.

Dicky’s Cakes, a family business based in Soweto, fell prey to the looters who left broken shelves and shattered glasses on Monday last week.

This family business has is popular  for selling the best themed cakes, scones and biscuits. Over the years, they managed to open four branches in Mapetla, Bara, Spruitview Mall and  Johannesburg CBD.

A businesswoman who took all her savings to start up a clothing brand to better her life and create jobs is now facing a bleak future after her goods were burnt down during the recent unrest.

Tembisa-based Pozie Clothing founder Yvette Raphael suffered a loss of R11,000 worth of ordered clothing items when a warehouse they were stored in was set alight in Durban two weeks ago, putting four jobs at risk. Her shop was not damaged and she only had the clothes that were ordered.

Thandi Johnson is in deep emotional anguish after seeing her life’s work destroyed by the looting that ravaged her store in Diepkloof, Soweto, last week.

Johnson, who owns the TWJ Partyland shop at Diepkloof Square, said she is now facing R800,000 in damage after CCTV cameras, furniture, stock, shop fittings, equipment, a fridge and microwave were either stolen or damaged.

A 10-year family business is at risk of not getting revived after it lost stock valued at over R500 000.

The Lab, a clothing store that sells formal and casual attire at Chris Hani Mall in Vosloorus on the East Rand, is owned by the Tema family. It needs around R250 000 to get back on its feet.

The owners of Onion&All, a slick kasi cafe, have been left disheartened when their establishment fell prey to looters.

The establishment, which is located in the heart of Pimville, Soweto, was broken into, vandalised, and had its property stolen during the lootings on Monday.

Zodwa Hlongwa felt like her life had come to an end when she realised that her bed store was ransacked by hordes of people who left nothing but destruction in their wake.

Nokukhanya Makhathini used all her savings and pension fund to open an internet cafe to help develop her historically disadvantaged community of Inanda, KwaZulu Natal, with information and communication technology skills.

On Monday last week, her business, Stepping Stones Technologies at Dube Village Mall, was not spared by the looters. Makhathini said she had lost two computer labs and an internet cafe.

Now that the dust around the civil unrest and mayhem over the past week is beginning to settle, we have to urgently attend to the legitimate socioeconomic issues that were raised by the riots.

At the outset, we have to condemn the mayhem that erupted in parts of KwaZulu-Natal and Gauteng. Similarly, we have to express our dismay at the tardy, fragmented and woefully inadequate response by law enforcement agencies, especially the failure of intelligence services.

Residents of Kliptown have started lending a hand to one of their favourites businesses which was vandalised and looted last week.

One of the businesses is Grootman restaurant by Lucky Lekgwathi, former Orlando Pirates captain.

A Soweto businessman who lost millions of rands worth of stock and equipment during the violent unrest says he is still determined to invest in the township despite suffering the devastating loss.

On Monday, Tony Mkhabela, owner of the T&N Butchery next to Jabulani Mall began cleaning up his business premises to prepare for resumption of operations.

In the midst of what appears to be degradation and despair, there’s actually a ray of hope for Alex FM and the community it serves.

The corporate sector, religious institutions, local businesses and the broadcasting industry had pledged financial, technical and logistical support for the resuscitation of the community mouthpiece, while the residents seem determined to pick up the pieces and rise from the rubble and ashes of the wanton destruction that has left thousands jobless and on the verge of despondency.