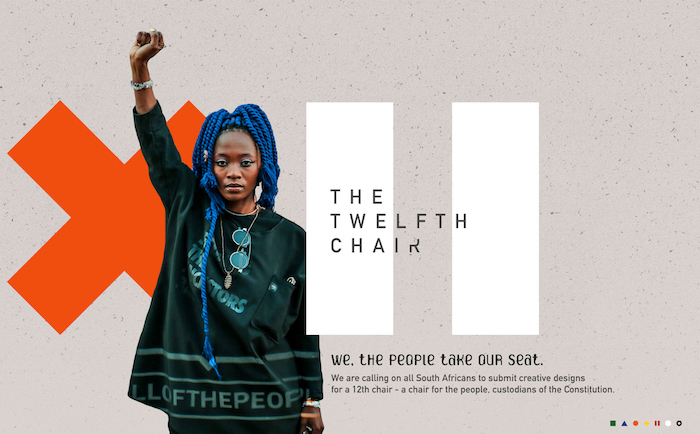 Ad agency Ogilvy Johannesburg and its client, Constitutional Hill, are launching a ’12th Chair’ at the Constitutional Court to represent the ‘people’s power’ as a celebration of the apex court’s 25th anniversary.

And the South African public has been invited to submit designs for the 12th Chair. In a release, Ogilvy said this is a “unique and significant way for all citizens to be a part of history, that will restore a sense of pride in our Constitution and our nation”.

Dawn Robertson, CEO at Constitution Hill Development Company, explained: “We call on entrants to immerse themselves in the site and particularly unpack the design of the Constitutional Court. This is where 11 judges take their seats to hear some of the most important matters in the life of the nation. They do so in a chamber that is inspired by the time-honoured African notion of justice under a tree. They do so by taking seats that are deliberately placed to ensure that the eye-line of the judges is in line with those they are talking to. That’s why we want to make space for one more custodian of our Constitution, the People.”

The Constitutional Court was originally created with 11 chairs for its 11 judges who uphold, promote, and defend the Constitution.

“Our purpose for creating a 12th Chair is to remind people that the Constitution was written by and for the people of South Africa. Over the course of South African history, we have witnessed that a mobilised citizenry is the source of the most potent kind of power, the people’s power,” said Peter Little, executive creative director at Ogilvy Johannesburg.

“Human rights form the foundation on which the Constitution was created. Which makes the people the guardians of our Constitution, just like the eleven judges at the ConCourt. We need a seat of power at the highest court in the land, which an ordinary citizen occupies. Reminding all of us to continue to uphold the values and principles that are enshrined in our beloved Constitution.”

“We encourage designs that reimagine and reinvent the aesthetics of power and envision a chair in which all people will feel comfortable and empowered. The chosen Chair will find its permanent place on Constitution Hill,” said Vanessa September, CEO of the Constitution Hill Trust.

The timing of the call is poignant. The impact of Covid-19, political unrest and the lack of social cohesion all bolster the need for a chair that represents the people of South Africa.

As we enter heritage month, the campaign reminds us of South Africa’s shift in the aesthetics of power. During South Africa’s apartheid years, seats of power were built to control and oppress, elevating the occupier of the seat above the heads of the majority of the nation. With the advent of our constitutional democracy came the rethinking of these aesthetics.

We encourage all South African citizens of all ages, experience, and design levels to submit their design.

●          A short list of 12 finalists will be prototyped and exhibited at the 12th Chair Exhibition at Basha Uhuru Festival in October 2021.

●          The winning designer will work with a manufacturing team who will assist with the making of the 12th Chair.