DES: The story behind the sensationalist headlines 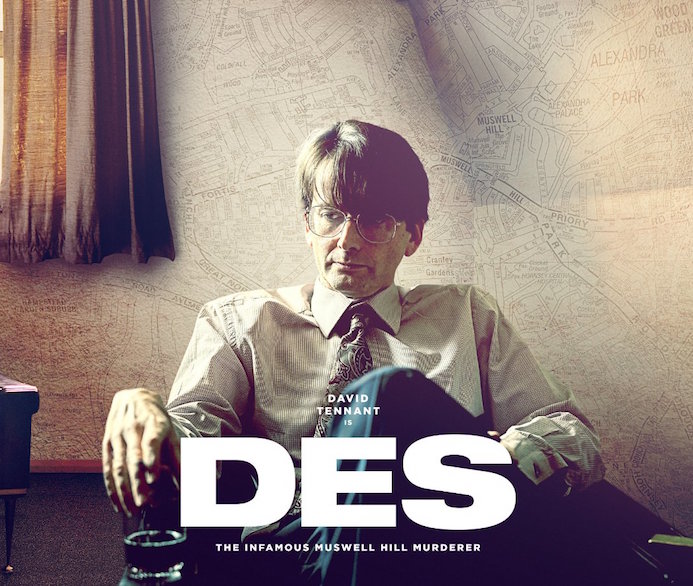 DES is a true-crime drama focusing on one of the most infamous serial killers in UK history – Dennis Nilsen. Referred to as the ‘kindly killer’, Nilsen was a civil servant who spent five years murdering boys and young  men he met on the streets of London from 1978 to 1983. He would meet and befriend these men before  offering them food or lodgings for the evening back at his North London flat. His victims were often homeless  or living off-grid, having slipped through the cracks of 1980s society and were therefore welcoming of this  stranger’s apparent generosity. When he was finally caught on 9 February 1983, Nilsen had murdered as  many as 15 men over a period of five years, making him Britain’s most prolific serial killer of the time.

After his arrest, Nilsen was astonishing in his honesty: initially admitting outright to all 15 murders in the  police car outside his flat. But infuriatingly for the investigating detectives, he couldn’t remember his victims’ names. With no apparent motive, inconclusive forensic evidence and most of Nilsen’s victims living off-grid,  the police started the biggest manhunt investigation in UK history. This time not for the murderer, but for  the murdered.

The story is told through the prism of three isolated men – a detective, a biographer, and Nilsen himself.  While Detective Peter Jay and the police investigation’s attempt to get justice for as many victims as  possible provides the narrative and emotional spine, the relationship between Nilse and his biographer Brian Masters allows us to delve into the mind of one of the most emotionally elusive serial killers the  world has ever seen. Can we ever really understand the mind of a serial killer? And, if we try, what price do  we pay?

In the words of the creators: Lewis Arnold and Luke Neal

Like most people, we were both aware of the Dennis Nilsen case from various documentaries and newspaper  articles about Nilsen over the years. It only takes a quick Google search to see that Nilsen is one of the most  infamous serial killers the UK has ever seen.

However, as we began delving deeper into the research we were  immediately interested in how wrong people’s – and our – perceptions of the case were. For instance, the  common reaction we came up against when mentioning Dennis Nilsen was the misconception that he ‘was  the one who killed gay people’. The more research we did, the more we realised this was simplifying a much  more complex picture. It wasn’t long before we realised that, in developing this for television, one of our  major motivations was to get beyond the lurid, sensationalist headlines at the time. Our aim was to explore  the more nuanced stories of Nilsen and his victims so that we could tell the real, human stories that had  been lost from the sensationalist headlines for 37 years.

Whilst never wanting to lose sight of the victims themselves, it also became clear to us that there was a  much wider impact from Nilsen’s crimes. It was not only his victims and the victims’ families whose lives  were irrevocably changed by Nilsen’s actions, but also the lives of the police officers involved in the  investigation. In fact, anybody who came into contact with Nilsen was irrevocably impacted in some way. It  is not a black-and-white story with any easy answers, but as all human stories are, it is so much more  complex than that.

The challenge for us was therefore to find a way into the story that wasn’t through the eyes of Nilsen. We  knew we never wanted to see Nilsen before his arrest in February 1983. We also had no interest in seeing  the crimes themselves or in giving a subjective viewpoint to a serial killer. So we decided to primarily focus the drama on the two men who were both drawn into Nilsen’s orbit, but who approached him from very  different perspectives.

Detective Chief Inspector Peter Jay was one of the first officers to come into contact with Nilsen on the day  of his arrest at 23 Cranley Gardens. After interviewing Nilsen for over 30 hours back at Hornsey Police Station,  DCI Jay heard all the horrifying details of what Nilsen claimed were fifteen murders first-hand. They had a  serial killer on their hands that they hadn’t even known about. However, there was one crucial detail missing:

Nilsen couldn’t recall the names of his victims. And so the police were tasked with a murder case in reverse,  and due to the age and vulnerability of the victims, Jay and his team made it their personal mission to find  every single name. An aim, of course, that they sadly failed to accomplish and which continued to haunt  them long after Nilsen’s conviction.

At the time of the events, Nilsen’s victims had all been labelled as drug addicts, homeless or homosexuals  by the tabloid media, a statement that was not always correct. Nilsen purposely preyed on people who were  homeless or living off-grid in the belief that they wouldn’t be missed by loving families. And in some instances  Nilsen was right – his victims were sometimes young men who had fallen through the cracks of society in  1980s London, meaning that Nilsen’s crimes could go undetected for 5 years. However, in many instances

Nilsen’s victims came from loving families who had been looking for their loved ones, and were worried and  concerned for their wellbeing. However at a time where the missing person numbers were of almost  epidemic proportions, these families found themselves faced with an insurmountable task.

The other character who made this case so intriguing was Brian Masters, Nilsen’s biographer who visited  Nilsen whilst he was on remand and eventually published ‘Killing For Company’ based on their conversations  in prison. When we first reached out to Brian, we were amazed by the complexity of this extraordinary  relationship between biographer and prisoner, and knew that he was a crucial part of the story.

Having previously written books about French literature and British aristocracy, Brian’s decision to change  his subject to serial killer Dennis Nilsen was an unusual one. However, after witnessing the homophobic  media’s reporting of the case, he decided he wanted to reach out to Nilsen in order to write the story himself,  someone who understood the world Nilsen operated in. He wanted to try and comprehend Nilsen and his  actions, without glorifying or sensationalising, but by simply presenting the ‘truth’.

Through Brian we were able to explore aspects of Nilsen and his crimes in depth, but always keeping an  objectivity, ultimately challenging and questioning the riddles and contradictions that Nilsen often spouted and gained a portion of his infamy for. For example, was Nilsen, as he professed, an ordinarily kind and  friendly civil servant who was dominated by darker forces outside his control at the time of the murders? Or  was he in fact a highly intelligent and manipulative killer who preyed on vulnerable young men who  responded to his apparent kindness? Of course, there aren’t any easy answers to these questions, and given  Nilsen himself changed and contradicted his version of events right up until his death in 2018, perhaps we  will never know.

This contradictory nature of Nilsen’s character was a key driving factor for deciding to name the drama ‘Des’.  Throughout the making of the drama we discussed the conundrum of Nilsen and his duplicity at length. The  nickname ‘Des’, we came to understand, was a meek and mild persona he would show to the outside world  and his victims as he met them in a pub or on the streets. ‘Des’ was a union man who wanted to help the  person in need and stand up for the weak and downtrodden. But this was a façade. A character created by  a narcissistic killer, who used this persona to lure the vulnerable and commit horrendous crimes for half a  decade without detection. This nickname started to personify for us all the reasons he got away with these  awful things for so long, and even when caught, was able to manipulate people around him in order to tell  his story the way he wanted them to. ‘Des’ became the metaphor for everything that was wrong about the  Nilsen case.

Through this process, above all, we never wanted to lose sight of the young men who were murdered by  Nilsen, who did not choose to be part of this narrative. We wanted to respect them and their families, and  make sure they are more than just a number or a side note in our drama. It wasn’t possible to represent  each and every one of the victims (known and unknown) within the constraints of a 3 hour drama. However,  we hope we have gone some way to shining a light on their stories in order that they are never forgotten:

Stephen Holmes, Kenneth Ockenden, Martyn Duffey, Billy Sutherland, Malcolm Barlow, John Howlett,  Graham Allen, Stephen Sinclair, along with the other unidentified victims and their families, not to mention  the other victims who survived Nilsen’s attacks, but who were left forever traumatised and scarred by the  events: Carl Stottor, Paul Nobbs, Andrew Ho, Douglas Stewart and Toshimitsu Ozawa.

Working on DES has taught us both a lot about society; how much it’s changed in some ways since 1983, but  alarmingly, how it’s stayed the same in others. The poor are as poor as they have ever been, homelessness  is on the rise and we are facing record unemployment. Nilsen was able to prey on these vulnerable young  men and go undetected for five years without society noticing, or worse, caring. The economic and political  resonance between the 1980s and today made this story feel sadly as relevant as it’s always been.

The question we have asked ourselves quite a few times during development is: If Nilsen were operating  today, would he get away with his crimes to the same degree and for as long as he did in 1978 to 1983?

The truthful answer, “probably”, sadly still makes this such an important story to tell. We must never forget  these crimes, however unpalatable. If we do, we risk someone as abhorrent and dangerous as Nilsen thriving  again.