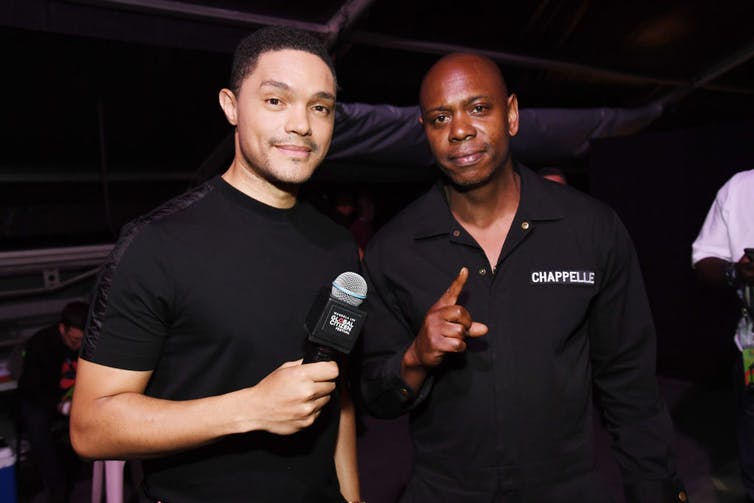 The essence of stand-up comedy is that you have a comedian performing to a live audience with the goal of entertaining through eliciting humour. Comedians hold social, cultural, and political phenomena up to ridicule. Jokes can instigate re-evaluations, reversals and replacements of the status quo – or dominant beliefs of the day.

As an art form based on abuse and amusement, comedy uses potentially offensive material. One would expect the audience to be either delighted or infuriated.

But stand-up comedy creates a space where a kind of agreement is reached, which renders most offensive gags inoffensive. This happens through elements like audiences choosing to attend, the venue and shared socio-cultural knowledge. Stand-up comedy has its own norms about how jokes are made and received. The synergy between comedians and live audiences allows for a momentary suspension of offence.

But when these jokes start to circulate in a separate space – like social media – they are subjected to other sets of appraisal and questioning. There is a growing backlash against comedians who supposedly tell unpleasant (or offensive) jokes. The social media audience is not present like the live audience. They participate less and jokes are more easily evaluated by sensitivities like political correctness.

This is a limitless, impersonal, and more diverse audience. They are more critical and more consumerist in nature. And the voice of dissent, even when it is just one person, is more amplified in new media encounters than in real-time encounters. This “bad press” can easily cause outbursts like this one from comedian David Baddiel:

Everyone has a voice now, so anyone can object to a joke. What you often see on Twitter is manufactured outrage … Comedy is a focal point for all that, being highly monitored by the dying-to-be-outraged.

Comedians are exposed to what I call “shifting cognitions of offence”, or a change in the ideas of what’s offensive. The result is a tendency to censor their own material. I’ve explored the ways in which two famous African comedians, Trevor Noah and Basket Mouth (Bright Okpocha), self-censor while performing for live audiences. They do so, in part, to anticipate the responses they will receive from their online viewers. I interrogate newer ways that comedians navigate this treacherous new terrain.

Trevor Noah and Basket Mouth are comedians whose influence has grown beyond physical venues. Their comedy shows and jokes are routinely shared via social media, to audiences who can interpret them in various ways.

South African-born Trevor Noah became internationally popular after succeeding Jon Stewart as the presenter of the US late-night TV event, The Daily Show.

Basket Mouth is one of Nigeria’s foremost comedians. He is popular across Africa and its diaspora, performing to live audiences in multiple African countries, as well Africans in North America and Europe.

Trevor Noah and Basket Mouth share two common traits: they weave recollections of their childhood environments and experiences into their jokes. They’ve also been embroiled in controversies over jokes that were considered too sensitive. This has affected their routines.

In stand-up comedy jokes are, by their nature, primarily offensive and politically incorrect. But the shifting cognitions of offence on social media demand self-censorship from comedians. A great way to self-censor is to give people the impression that you are “punching up”. Comedian Patti Harrison beautifully describes the technique:

If you want to make a joke, you want to punch someone. It should be punching up. You should attack people who are getting away with stuff; who are very powerful and influential, that like have it coming.“ (New York Times 2017)

As their performances are exposed to a wider audience lacking adequate context, Basket Mouth and Noah can defend themselves against criticism by punching up. When Basket Mouth is on stage, he deploys boastful tales, coercing his audience into realising their gullibility at the end of his set.

In this way Noah has managed to keep his local audience on his side, while also passing the social media test. This shows that with more creativity, you can side-step cancel culture – in other words being ostracised – while staying funny.

Times are changing, and so is comedy.

Jokes exist for societal acceptance. The audience calls the shots on what to accept and forbid. And right now, society has moved to a place where everyone is held accountable if their jokes are found offensive.

Stand-up artists can still throw jabs during performances, but they now have a new set of rules to follow. They have to stay within the dynamic bounds of political correctness to attract humour, rather than anger. It takes immense creativity and improvisation to navigate this new world.