LATEST NEWS
Home Press Trust in media and Google rises, but not in journalists

Trust in media and Google rises, but not in journalists

In a world of disruption and division, little victories are worth celebrating. So the headline news that one of the key barometers that measures trust in media has shown an increase is noteworthy. But for journalists, the underlying information is worth closer scrutiny.

Trust in media, among the informed public, made an ‘impressive turnaround’ in 20 of 28 countries surveyed for the annual Edelman Trust Barometer that was released ahead of the start of the recent World Economic Forum in Davos.

Richard Edelman, CEO of Edelman, says, “Trust is rising in the elite or ‘informed public’ group – those with at least a college education, who are very engaged in media, and have an income in the top 25 percent. However, in the ‘mass population’ (the remaining 85 percent of our sample), trust levels have barely budged since the Great Recession.”

It is a big study, 33 000 respondents in 28 countries and its focus is much wider than media – examining trust in NGOs, business and government. 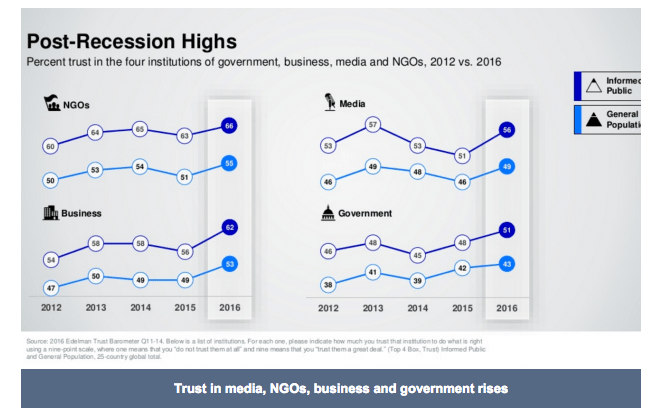 But the media information is revealing: for the fifth consecutive year, search engines (63 percent) and traditional media (58 percent) remain the two most trusted sources for general news and information.

Some read this as evidence that Google is more trustworthy than the content they aggregate.

Online media jumped 8 points to 53 percent and is now the third most trusted source, followed by owned media, which is up 3 points to 46 percent and social media at 44 percent.

But trust in journalists declined. In fact, CEO’s, colleagues and academics were trusted more than information coming from a journalist. 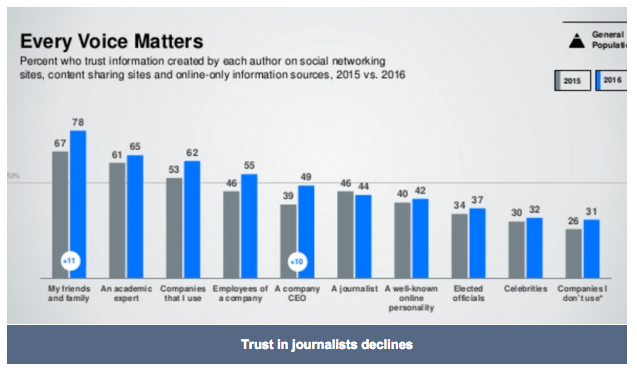 Journalists are frequently rated poorly in these kinds of surveys – often coming up less trustworthy than real estate agents. But the generalised responses hide real cases of improvement.

So, what is to be done about it?

The rebirth of trust is an issue editors will focus on when we meet for the World Editors Forum in Cartegena, Colombia in June.

Case studies will be shared showing how editors are building trust by using a mix of new digital tools and best practice journalism to build legitimacy. The award-winning newspaper La Nación from Argentina will be one of those featured, and editor-in-chief Carlos Guyot will show how his newspaper has built trust through outstanding, cutting-edge digital journalism.

Cherilyn Ireton is executive director of the World Editors Forum at WAN-Ifra. This story is republished with permission.