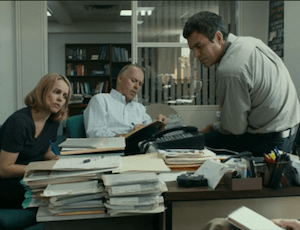 This weekend’s 88th Academy Awards was a very personal occasion for Washington Post executive editor, Martin Baron. He features in the film ‘Spotlight’,” which was nominated in six categories and won Best Picture.

“I’m in Spotlight, but it’s not really about me. It’s about the power of journalism, Baron wrote in The Washington Post.

“Journalists worldwide have now seen the movie, and they’ve reacted the same: This movie is stunningly accurate in how it portrays the practice of journalism, investigative reporting in particular,” he wrote.

Baron reflects on the film’s impact on journalism; how the project came to be; his first meeting with Liev Schreiber; his early months at The Boston Globe; and the emotional moment of realising the impact of his long-ago work would be magnified in the form of a movie.

“The rewards will come if this movie has impact: On journalism, because owners, publishers and editors rededicate themselves to investigative reporting. On a sceptical public, because citizens come to recognise the necessity of vigorous local coverage and strong journalistic institutions. And on all of us, through a greater willingness to listen to the powerless and too-often voiceless, including those who have suffered sexual and other abuse…

“I was surprised that [my colleagues at The Boston Globe and I] were approached at all, and at first we were wary when two young producers, Nicole Rocklin and Blye Faust, came to the Globe’s newsroom seven years ago to broach the idea.

“When they optioned our “life rights” — giving filmmakers the right to our story and securing our cooperation — I had little expectation it would be produced, notwithstanding their earnest commitment…

“For all their work, the project seemed a long shot,” Baron wrote. 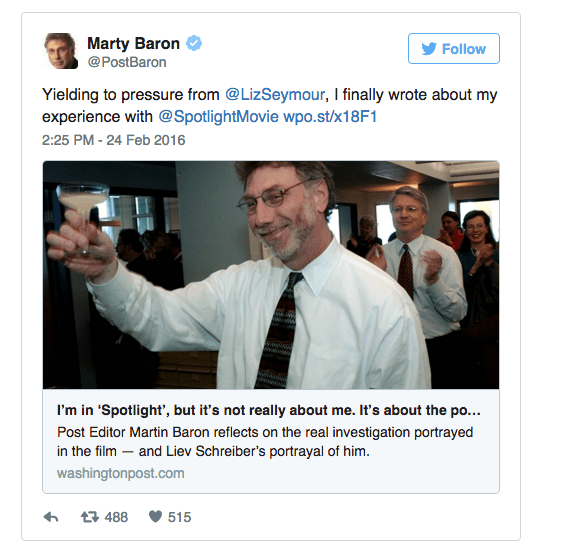 This story was first published by World Editors Forum and is republished here with permission.