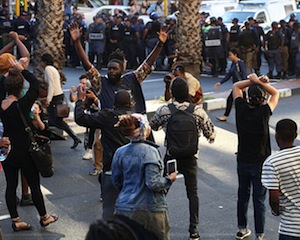 One of the reasons university students are so angry is because of the obsession by big business and media groups for only employing and promoting graduates.

Somehow, it seems to have become an absolute fundamental of just about any job description or vacancy ad to insist on candidates having a university degree. This in spite of history showing hordes of very successful businessmen, editors and publishers not having had any formal tertiary education.

Of course, doctors, dentists, lawyers, teachers, architects and other professions need to have university degrees.

From decades of consulting to big business I have seen highly skilled employees held back from promotion simply because they did not have a university degree. The argument most used is that having a degree proves that the person concerned has had staying power and dedication. Which is absolute nonsense. Poor people have staying power and dedication but have never had the huge amount of money it takes to get a degree.

As I have mentioned before, the state of journalism in South Africa is at an all-time low. Most media owners and editors, after a couple of whiskies, will admit to that in the same sad and sorry way they tell their bed mates, late at night, that the ANC is stuffing up the country.

Nowadays, most media insist on new additions to the newsroom having some sort of tertiary journalism education.

Which is a tragedy, in my opinion, because many of the world’s greatest journalists didn’t go to university – heck, some of them didn’t even finish school. But all of them were born with ink in their blood.

I remember an enthusiastic young man called Abbey Makoe wandering around the newsroom at The Star offering to go and dig out information from those areas of the townships most of the reporters weren’t too keen on entering.

He had a remarkable nose for news and managed to ferret out information with ease and aplomb.

A few of us asked him why he didn’t just write his own stories instead of giving all his information away to reporters in exchange for a few rands.

He actually didn’t know how to write stories. His first attempt at putting pen to paper was almost indecipherable.

A delegation from the newsroom went to the editor to ask if Abbey could be enrolled in the company’s cadet school. No chance. He didn’t have a university degree.

The long and the short of it was that after a lot of arguing and pestering Makoe was put on the staff and in no time flat he had won a scholarship to the US and when he arrived back it didn’t take him long to become deputy editor of the very newspaper that had in no uncertain terms told him to piss off because he didn’t have a degree.

The story of Abbey Makoe is just one of hundreds that in most cases prevented gifted journalists from becoming journalists.

One of South Africa’s most accomplished editors, Peter Bruce, wrote some time ago: “Journalism isn’t worth teaching at university. It’s an experience thing. A trade, like plumbing.”

When it comes to sales or any function that involves communication or interacting with people, the same principle applies. It’s an experience thing. It’s a natural talent.