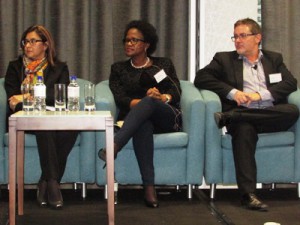 Topics under the microscope included advertorial vs. editorial, journalists’ pay, challenges media houses are facing, and how social media is an ally as well as an enemy. Michael Bratt attended the event to find out more.

The most prominent topic during the discussion was editorial vs. advertorial and whether media houses should be including more native advertising/product placement in their content.

“Radio stations would put themselves more at risk with native advertising, because in the long run, they would lose credibility and then advertisers would leave anyway,” Mochaba said. She believes that a balance needed to be found to ensure credibility remains intact while the station is sustainable and has enough ad revenue coming in.

Rose disagreed.  “All media wants to find a workable business model. If you are not able to make a profit, then it’s a loss to democracy when a publication is forced to end… If advertising infringes on the message or credibility of editorial then it’s a problem, but I have never seen that happen”. He added that in today’s world people no longer said ‘no’ to advertising in their content; it was simply a negotiation of just how the advertising is portrayed.

The other big issue that came up during the discussion was the question of whether low pay was killing journalism. Mochaba said this issue was a tricky one to discuss as “you would have to assume that the majority of journalists are lowly paid. Before we can discuss it, we have to discuss whether that is a fact”.

Hand in hand with this issue were concerns about the juniorisation of newsrooms many media commentators say is happening. “There are a lot of very good junior people around. Mentoring or training is a bigger problem than the juniorisation of the newsroom. There needs to be much better training of juniors,” said Rose.

Talking about regulation, Mochaba said, “We are in this sector that is heavily regulated. Where competition is no longer only defined from your traditional radio platform. Because you are competing with everybody else, with less less regulation, and in some instances no regulation at all”. She called for a common ground on how we understand regulation to ensure an equitable playing field.

After the discussion was finished, Maggs spoke to The Media Online and explained the biggest difference in journalism he has witnessed from when he first began to the present day.

“The speed at which newsrooms have got to operate these days is the biggest difference, because of the competition that social media gives us. We used to be able to be a little more indulgent, we were able to spend more time reflecting on a story, more time interrogating the issue. These days it’s moving at warp speed”.

Interesting to note was his observation that in the last 12 months this rapid movement of news has only intensified, speculating it is because there is so much going on in South Africa that needs to be covered. He also added that these days, journalists are expected to be multi-disciplined, writing the story as well as utilising social media tools.

Maggs also warned newsrooms about this speedier news landscape, “In getting to the story so fast there is a danger that we could compromise quality and accuracy… We must be careful that the speed doesn’t kill us”. He also gave his thoughts on the question he asked the panel of whether social media is an ally or enemy to media. “Principally social media is a threat as traditional media is increasingly competing with behemoths, but it’s also a useful resource. Often social media gets to the story way before traditional media does… but what I am concerned about, is that you cannot be blinded by the information on social media because it is unguarded, it is unfiltered, and it is not gate kept properly”. He added that he has seen online publications resort to things on Twitter as if it is the gospel, when it is not.

The technology panel discussion was hosted by editor, speaker, columnist and publisher of Stuff magazine, Toby Shapshak, and included representatives from Uber, Altron, Microsoft, IBM, and Naspers. It highlighted some key trends with technology including a big section on how mobile is the future for message consumption, particularly basic and low end smartphones, which are prominent in Africa. Also highlighted was how the world is very transparent, where actions of people cannot remain hidden from the general public, and how there is an on-demand culture. This means people will consume the content they want, when they want, where they want and how they want, a trend that media houses need to adapt their offerings to.