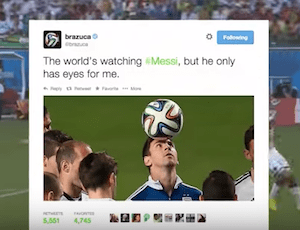 The human body is an amazing place to be. Physiology aside, the most remarkable thing about our co-ordinated mass of flesh and bones that we call home, is the life that it carries. You and me. Our personalities, our character, the things that distinguish us and the things we do to fit in or out of the contexts we find ourselves in.

According to data, around half a million people worldwide find themselves within the context of advertising and communication. Compare that to the company you work for and it’s quite a big number. Compare it to the world’s population and it doesn’t seem that grand. Either way, if you took away those 500 000 people, the world would be a very different place.

Thinking of our industry in this way has led me to believe that the world, in most instances, experiences or interacts with advertising as a ‘whole being’. Advertising, like politics and other industries that have a direct impact on society, is often referred to in the singular. It’s seen through the lens of what the whole industry is doing. Undoubtedly, each country has its own advertising climate, like the Scandinavians being known for their amazing tech or the Japanese for their larger than life imagination.

The same could be said for agencies like Wieden and Kennedy, who are consistently pushing the boundaries of what’s creatively possible with the so-called ‘dying’ medium that is television.

Something in the water at Ogilvy Joburg?

Closer to home, I’m seriously starting to wonder if there is something in the water at Ogilvy Jo’burg as they have on more than one occasion, spectacularly set the global benchmark for radio advertising. And yet all these feats of advertising excellence, and the creative nuances of the countries that produce them, are but a part of the overall footprint that advertising makes on the world. I want to believe that it’s the sum of the entire effect of the 500 000 people in our industry that, if significant enough, history will record.

But all these thoughts, when coupled with my slight dabbling in human anatomy, paint a simple notion that perhaps advertising can be likened to the human body. Filled with an abundance of life, diversity, complexity and the capacity to use its capabilities for a variety of outcomes. One such capability that has interested me as of late is advertising’s ability to think and to think fast. In fact, if you look at it from a physiological angle, you could get painfully technical about whether this quick-thinking is a result of our industry’s autonomic or somatic nervous system.

Simply put, the body’s autonomic nervous system (ANS) is responsible for functions not consciously directed such as breathing and digesting whereas the somatic nervous system (SNS) refers to voluntary muscular and skeletal control. In fact, for you and I, our ANSs are at work right now as we have probably taken a couple of breaths while reading this sentence. Neat huh? And it’s your SNS that is making the muscles in your eyes move from left to right as you read this sentence. One happens on its own, and the other receives a ‘cue’.

As an industry, you could argue that we’re built on relying on our SNS because that’s how we do the actions that we are in control of. We make projections and billings and media plans. We create artwork and budgets and strategies. You’re 100% in control and therefore, generally, there’s a 100% predictable outcome. But then you get that Superbowl tweet from Oreo (360i actually) in 2013 when the stadium lights went out. Or that time when Nando’s (Black River FC) made an unforgettable ad in response to Ard Matthews’ very forgettable national anthem mess-up in 2011.

But forget about real-time marketing or tactical advertising. Buzzwords are not a guarantee for successful or memorable advertising. The success behind the ‘tactical’ pieces of work is that the agencies set themselves up to do them. No luck involved. Canadian agency john street created a delightful parody video called reactvertising (below) that sums up how buzzwords (particularly ‘real-time’) can actually end up skewing our common sense as an industry.

But when you put real-time and tactical advertising aside, the real challenge for our industry is to remain as fleet-footed as possible. One of the most amazing functions of the autonomic nervous system is what is commonly known as fight or flight. When induced, people are known to jump over ridiculously high walls and mothers can move cars off their children. In those moments, the body does some incredible things to go into ‘superhuman’ mode. In that light, the popularity of real-time advertising isn’t quite yet at that level, it’s more like a twitch at the moment.

But I believe this is still good news for the industry. Brands like Adidas and their 2014 brazuca campaign prove that twitch-thinking isn’t about a few lucky posts or tweets, but it is actually a campaignable methodology. For sure, we sometimes twitch and say really silly things, but that further buttresses why it shouldn’t be about jumping on the hashtag-wagon.

Doing it right is going to be a stretch for agencies and brands because how do you begin to plan to react or contribute to something you don’t know will happen? As we figure it out, I’m sure we’ll come to realise that the nimbler our industry is, the better. That a place does exist for us to be as fleet-footed as we are sure-footed. And it could be that that place may never overtly introduce itself to us, it could start off as a little twitch.