LATEST NEWS
Home Press Journalism in the age of lying

Journalism in the age of lying 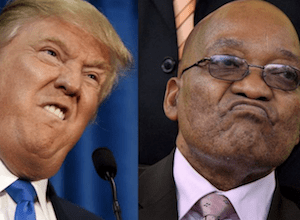 More and more, in this country and in many others, journalism is becoming contested terrain. More and more often a journalist, or the media organisation’s entire coverage, becomes the story.

From Fox News and its treatment of Donald Trump, to The New Age and its reportage on government and President Jacob Zuma, similar trends have emerged over the last decade. The players in this extraordinary theatre these days fill the entire spectrum, from routinely bending the truth to lying outright, to achieve their political aims. Journalists, surely, have a duty not to let their audiences be misled. How then do we achieve this? Where does this conversation start? And what strategies should journalists follow?

But the lies do have consequences: some people believe the lies and will adjust their view no matter how outlandish they may seem; some people will be so outraged that they would probably wish would Trump drop dead.

But probably everyone who owns more than three grams of brain mass agrees that Trump’s campaign has to be covered by journalists in a way different to the way other politicians have to be covered.

From their side, The Huffington Post has had enough. It now runs this message at the end of every report about Trump: “Editor’s note: Donald Trump regularly incites political violence and is a serial liar, rampant xenophobe, racist, misogynist and birther who has repeatedly pledged to ban all Muslims ― 1.6-billion members of an entire religion ― from entering the US.”

As a comment, it is pretty devastating. If you are reading the Huffington Post, you are made immediately aware of the problems the publication is facing with Trump. But whether or not this note actually changes the mind of the waverers, the undecideds in this election, is difficult to say. Such is the “echo chamber” effect of media in that country that if you are reading the Huffington Post, you’ve probably already decided to vote for Hillary Clinton.

There is already a very real consequence of what happens when journalists follow the “both sides of the story” model, where they simply report what one side of an argument says, and then balance it with the other side. The vote by Britain to leave the European Union appears to have been a consequence of the British Broadcasting Corporation simply sticking to its tried, tested, and now discredit model of “balance”. During the debate, before the referendum, it would simply have spokespeople for both sides of the argument. It has now been strongly criticised by many people for not properly interrogating the arguments of the “Leave” campaign, which included many lies (particularly around the amount of money leaving Britain going to the EU, and how their National Health Service would benefit from that cash).

This brings us to South Africa.

Where the truth lies

As the ANC continues to appear to be at war with itself, it is becoming harder and harder for all of us, politicians, journalists and the public, to know where the truth lies. Is President Jacob Zuma guilty of corruption or not? Does he face hundreds of charges or merely hundreds of counts of charges? Is Pravin Gordhan a completely clean individual and is Mthandazo Ntlemeza a liar and a crook? Or the other way around?

In some cases, it’s pretty easy to know what is happening. Zuma hasn’t been charged by the National Prosecuting Authority, but the earlier decision to withdraw the charges has been struck down. He faces hundreds of counts, not charges, no matter what DA press releases say. There are legal facts to back those up. There is a legal judgment to back up the claim that Ntlemeza is the liar and the crook. But so many people have thrown so much dust around Gordhan that there will be people who now believe he is the person in the wrong.

This presents SA journalists here with several major difficulties. Take the example of the claim that Thuli Madonsela, the current Public Protector, is a spy for the CIA. It was first made on an online blog. Now, in the last month or so, the ANC Youth League has repeated the claim several times. Just to be clear, this is an arm of the ruling party claiming that someone in an important position is actually in the pay of another country. No proof has been offered by the League.

What is a journalist to do in this case? Simply report the claim and the denial by Madonsela? That would be what many old-school people would do. But what if the claim is completely without merit, and has been made with a political aim of weakening an independent arm of state? What does a journalist do then? Especially when the claim was first made nearly 18 months ago, has been investigated by the State Security Agency, as ridiculous as it was in the first place, and yet no conclusion has been forthcoming. Which surely strengthens the claim that it was nonsense all along.

To report it will help those using a political manoeuvre to achieve their aim or weakening a Chapter 9 institution which is vital to our democracy. Surely journalists should be aware of these manoeuvres and shouldn’t aid those who try them?

But what if you don’t report it? Are you not then making a value judgement? Do you run the risk of taking sides? And how do you make these decisions in the first place? All of these decisions run the risk of being highly political. In an ideal world, this would mean then that different media organisations would have differing political analyses of situations like this, and thus reflect the claims differently. That would allow people to make up their own minds. But what then about the “echo chamber” effect? If you only read one paper or consume one media outlet, it’s probably because it already reflects your view of the country and the world. That means that over time your views will only be reinforced, rather than challenged or changed.

A good example of this problem is a statement released by the ANC Women’s League on Friday. It claims that the Public Protector has “moved with speed to ensure that she doesn’t disappoint vivid Israel supporters i.e. Democratic Alliance”. It then, through a series of grammatically challenged sentences, appears to attack Maria Ramos, concludes that an investigation into state capture that “excludes white monopoly capital, is advancement of white supremacy and serves a racial political agenda that hinders the building of non-racial society… We call on the PP’s Office not be allowed to be a player in settling racial political scores by the Israelites supporters i.e DA”.

It is difficult to know where to start with such a statement. It is tempting to simply attack the English and the grammar, as some people have already done. But in a country with as many languages as this one, it’s surely wrong to just point and laugh at people because of their incorrect use of one language. Laughing at the use of a language could in itself be a political act.

Leaving aside the so far unexplained conflation of the DA with “Israelites”, it appears this statement is an attack Madonsela’s investigation into the Gupta family and the claims of state capture against them. That is all good and fine. It makes sense to see if other corporates might have done what the Guptas are accused of doing. Except that in this context, we all know, or take the view, that the ANC Women’s League is itself “captured”. We say this because it has previously defended the Gupta family, and appears to be part of a faction within the ANC. But this is all supposition. Well-founded, solid, considered supposition. But supposition nevertheless.

So how then do we as journalists report on it. Straight up and down with both sides is not good enough. Part of the answer lies in providing context. A comment by MK Military Veterans Associations chair Kebby Maphatsoe defending Hlaudi Motsoeneng and attacking Gordhan can be contextualised by the phrase, “Maphatsoe has previously defended the Gupta family”. It’s true, provides valuable information, and could help the reader understand why he has made these comments, or at least which sides of things he is on.

But sometimes context isn’t good enough, and can get you into more trouble. If the Huffington Post has decided to label Trump a liar, what would happen if a South African publication were to do the same to Zuma, and say that “Zuma has previously lied to the nation about his reason for removing Nhlanhla Nene and was found by the Constitutional Court to have broken his oath to uphold the Constitution”. It is, surely, true. But is it not too strong, too agenda-driven, too opinionated for a simple news story?

In the end, one is forced to make judgements based on the credibility of the people involved. If Mzwanele Manyi claims to have “received a dossier” of information against the head of Procurement at the Treasury, Kenneth Brown, and passed it on the Hawks, then your decision to cover it or not must be based on their credibility. No one has ever made claims of corruption against Brown; it would be strange for them to suddenly emerge now.

Manyi, of course, never misses an opportunity to back Zuma, the Guptas, or attack Gordhan, the banking industry, or anyone else he sees as oppositional to Zuma. He has also tried to lay charges of treason against Sipho Pityana for merely saying Zuma should go. Bluntly, he acts like a hired political hack. It is for this reason that it is difficult to believe his claim, any claim.

But then we have an even bigger problem. We all know about the head of the Hawks, about how it seems impossible to believe that he is capable of acting in a neutral manner (just on Sunday, the City Press reported that National Prosecuting Authority head advocate Shaun Abrahams has said there is not enough evidence to prosecute Gordhan, to Ntlemeza’s disappointment). So what if he does then “investigate”, and claim publicly that there is evidence against Brown. Journalists will look like they played a political role in not reporting Manyi’s original comments. But to report on them gives probably spurious claims credibility. This shows the trouble for journalists when people who are not neutral and honest are appointed to senior positions like heading the Hawks.

And we cannot forget this is the 21st century, where the internet is breaking down the old demarcation lines, and media’s business model as we know it. Our readers are bombarded daily with lies, outrageous lies, semi-truths, and inuendos. Can we just continue doing our job the way it’s been done for ages, or should we open our eyes and admit that the bad guys figured out the way to turn us into their soldiers? And that, if we are to fulfill our true mandate, we must go much greater distances for our audience. We must report and explain the world to them. If we fail in this duty, everyone will pay for it.

As life for politicians gets harder as accountability finally comes into our system, it is going to get harder for journalists too. Some usual rules still apply. Experience and knowledge matter. It helps journalists to make the right decisions. In the end, that is all we have.