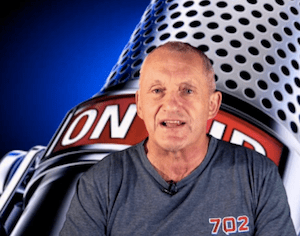 Thirty years at 702 has “been a blast” but now it’s time to move on, says legendary talk show host and former rugby star, John Robbie.

Robbie, who turns 60 this month, will leave the station at the end of the year. He will be replaced by current afternoon drive host, Xolani Gwala, who, in turn, will see Red Thlabi take his place. Eusebius McKaiser, who’s been standing in for Thlabi while she was on maternity leave, will permanently host the 9am to 3pm slot on the popular Gauteng talk radio station.

“Just as I ended my rugby career, I knew when it was time to go and informed my bosses. Thirty years at 702 has been a blast. I am proud of my contribution and proud of the station. It is one of the most transformed businesses in SA and has a massive role to play going forward,” said Robbie in a statement. “In 30years, many on the morning show, I was never late once. Good luck to my dear colleagues and friends who are listeners and advertisers and to my family who have shared the journey. It has been a privilege to serve.”

The 702 line-up has already gone a major shake-up when Sam Cowen announced she was hanging up her headphones.

Robbie has driven the 702 breakfast show for nearly 15 years during which time the station has evolved into one of South Africa’s most respected media platforms. He has won numerous awards and interviewed significant newsmakers on almost every major news story to affect South Africa, often setting the Gauteng and national news agenda for the day, the station said in a statement.

“John has been a part of the fabric of the station since 1986 and has guided audiences through some of the most tumultuous stories and changes in our recent history,” said Primedia Broadcasting CEO, Terry Volkwyn.

“He’s gathered legions of fans, gotten into plenty of trouble and done an extensive amount of good for listeners and communities around Gauteng. He has become a part of hundreds of thousands of Gautengers daily lives and we are all going to miss him.”

702 station manager, Thabisile Mbete, said the station was sad when Robbie announced his plans to retire earlier this year. But, she says, the station is “in an exceedingly fortunate position to have the depth of talent on our station that we do”. The new line-up, she added, “strongly reflects South Africa. It is balanced and will take the station into the future”.

Gwala said he has “immense respect for John and what he has done for 702 and South African radio in general”. I know that taking over from him will be a great challenge, but I’m humbled by it and looking forward to it,” he said.

And Thlabi is delighted at taking over the afternoon drive show which, she says, is “perfectly placed to reflect the news of the day, capture breaking news as it unfolds and provide a platform for debate and reflection. I am looking forward to the show’s fast pace and unpredictability. I feel like I am going back to my newsroom roots with the added advantage of interacting with listeners”.

And McKaiser says he’s ecstatic to be hosting his own show: “Our country and world cry out for debate, creating meaning, being silly, laughing together, disagreeing deeply, emoting openly, and all the while building community. It’s an enviable joy to have the privilege of being in conversation with our listeners daily in my favourite slot on the radio clock.”

One other change was announced: Veteran journalist Karima Brown will be hosting Talk @ Nine on Sundays. She was the Friday Stand-In for Redi Tlhabi earlier this year, and took to the radio medium with positive response from the audiences. She will be hosting a current affairs show that discusses and analyses the stories and issues that come out of the Sunday newspapers.

The changes to breakfast and afternoon drive as well as 09h00 to midday will take effect in the new year, from 9 January 2017.