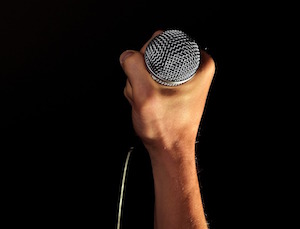 Radio is still showing robust and stable measurement in South Africa, the Broadcast Research Council of South Africa (BRC) said this week as they released their November 2016 RAM presentation.

Setshwano Setshogo, BRC research director , said they were building up to a 30 000 sample would present the last quarter, and the full year in February 2017.

Interviews continue every day of the week, across every province and area type. This enables the 60% metro, 20% small urban and 20% rural split required. Stations included 39 commercial and PBS stations and 266 community stations measured during the fieldwork period. 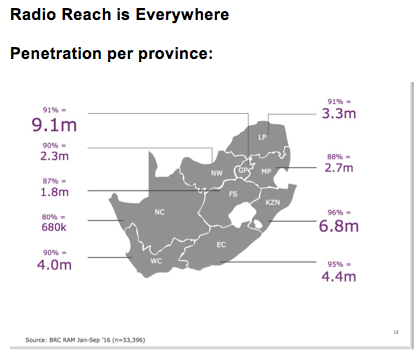 South Africans are loyal to their radio stations with 64% listening to only one station. Rural listeners are the most loyal at 67%, followed by small urban at 65% and urban at 60%. Free State has the highest loyalty at 76% followed by the Northern Cape at 72%. Gauteng has the least loyal listeners at 57%.

Broken down by language, English and Xhosa listeners are the least loyal at 61% and Ndebele the most loyal at 73%.

Looking at devices, from January – June and January– September at nine months rolling, the trend is stable and continuing across the board. 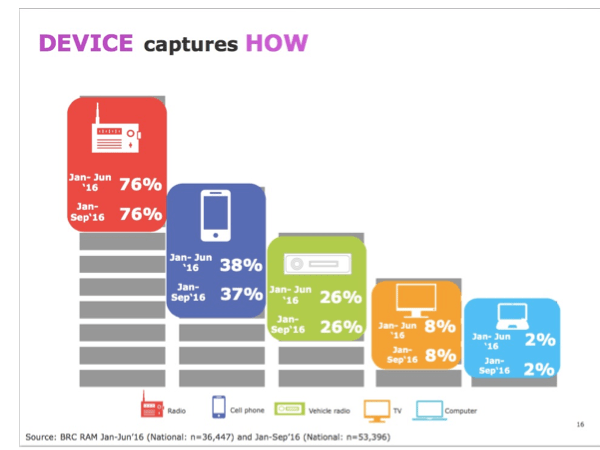 Commercial and PBS stations with the highest percentage of exclusive listeners are Ukhozi at 59% and Thobela FM at 56%. At the low end 5FM has 25% loyalty, with YFM at 24% and Good Hope at 27%. The lower percentages may be attributed to the 90/10 local content ruling.

Share of audience by province is showing stable trends. Umhlobo Wenene is still way ahead in the Eastern Cape with 52% of listeners. Lesedi FM takes top spot in the Free State with 61% listenership. Gauteng audiences are more evenly split with Metro FM ahead with 15%, followed by UKhozi and Lesedi FM both with 11%. Uhkhozi in KZN is way ahead with 54% listenership. Limpopo’s Thobela FM is also far ahead of the other stations with 37% listenership. Mpumalanga shows a more even split with Ligwalagwala still ahead with 22%. Motsweding in North West is far ahead with 44%. RSG has taken over the top spot in the Northern Cape with 24% listenership and Motsweding FM has fallen to second place with 21%. The Western Cape also shows a more even split with Umhlobo Wenene taking top spot with 19% listenership, followed by Heart FM with 14%.

Looking at devices, the vast majority of South Africans are still listening to the radio. The second most popular device is cellphones and in the case of YFM and Capricorn, this has overtaken traditional radio as the more popular listening device. Vehicle radio is the next most popular device with Bok Radio, Classic FM, Cape Talk and Rise showing significant percentages of listenership, Listening on TV is highest for Ligwalagwala at 14% and lowest at 3% for Gagasi. Computers are the least popular listening device at between 1 and 3 percent per station, with the exception of Rise which shows computer listenership at 8%, OFM at 4% and YFM at 5%.

Looking at the trending one week cume, Metro had dropped off in the last six months and Good Hope, Jacaranda and East Coast also show a slight drop off, Jozi, Kaya, Cape Talk and KFM have grown.

The community stations showing growth are Jozi and Unitra. Voice of the Cape has dropped off significantly and Radio Tygerberg and Radio Zibonele have dropped off slightly.

Looking at reach by media type, radio has good penetration across the board while newspapers and magazines have dropped off. With cinema being a more exclusive medium, it makes sense that the reach is lower. 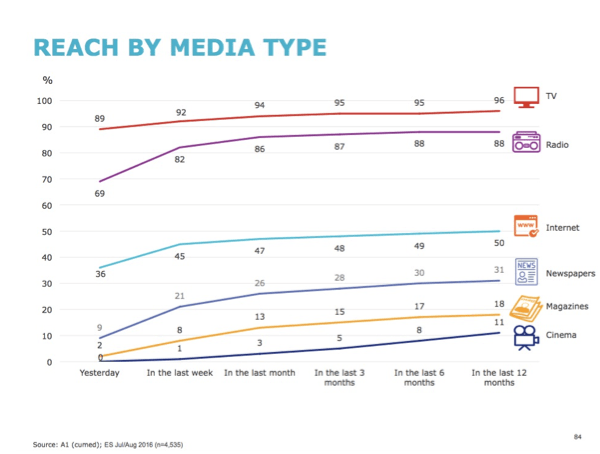