Radio and digital: One night stand or meaningful relationship? 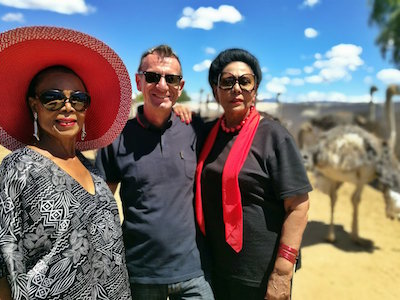 There’s a certain twilight zone feel about life these days. All of our absolutes are no longer absolute.

And just when you think it can’t get any crazier… it does. The entire Donald Trump story feels like it was plagiarised from a Ben Elton novel.

It doesn’t feel any less crazy in the advertising world. Everything we took as absolute 15 years ago has exploded. There’s a great video doing the rounds in the radio industry of a presentation that marketing guru, Professor Mark Ritson, gave to the Commercial Radio Conference in Australia in October last year.

It’s quite long but it’s well worth a view, not just for radio people, but for anybody in advertising who is trying to make sense of the seismic shifts the industry is experiencing.

Ritson points out that 15 years ago you wouldn’t have believed that, worldwide, digital advertising would outstrip all other sectors by 2020 (which all predictions say it will.)

Even more unbelievable is the fact that over 50% of all advertising in 2020 will go to to just two companies, Facebook and Google. Two companies that virtually nobody had heard of 15 years ago (well, we certainly hadn’t heard of Facebook as it was only founded in 2004.)

This is a very plausible prediction, irresistible even, but only if you’re unable to see beyond a narrow definition of media as either traditional or digital.

What Ritson does superbly in his presentation is to bust the myth that we can define advertising in such narrow terms. It’s like we have two clear and distinct columns. On one side we have boring and unmeasurable traditional media. On the other we have sexy and measurable digital, and every medium has to fall into one or the other.

Is radio a digital medium?

Digital giant Amazon’s great new disruptive initiative? They’re building bookstores. Not virtual bookstores but real bookstores made of bricks and glass and stocking real books. So does that make Amazon a traditional business?

It’s a nonsensical categorisation. And it’s completely unnecessary. The truth is that all currently ‘traditional’ media will ultimately operate in a digital space. So, for that matter, will every business.

Digital is not a medium, it’s the market place. A good marketer understands that digital is the place where we convert the sale. It’s the end of the consumer journey, but not necessarily the beginning. The beginning of that journey is still so often what we know as traditional media.

One of the main reasons marketers are shifting to an ‘and’ and not a ‘versus’ approach is that those who have tried a digital-only strategy are beginning to understand that it carries some serious limitations. We know that banners don’t really deliver. Then there’s the fact that digital audience metrics are not standardised and are certainly less rigorous than those used to measure radio.

Did you know that a consumer need only watch three seconds of a video (not even full screen) for it to be deemed that they watched the entire video?

Meanwhile, Facebook has admitted to inflating the measurement of video viewing by 80%. Traditional media would simply never get away with being that unaccountable and vague.

A lot of marketers are firmly in phase one… Revolution. They’ve embraced a ‘digital first’ advertising strategy which basically means putting everything into digital. In his presentation, Ritson argues that this is no strategy at all. In fact ‘digital first’ has effectively killed strategy for many brands. They’re choosing their media before asking themselves the most fundamental of marketing questions: What’s my target segment? What is my brand position? What is my communication objective?

The result is that a lot of big brands are sacrificing awareness for a series of supposed one-on-one engagements. They’re putting the cart before the horse. One-on-one engagements are gold but only if you know you’re talking to the right person and you’re sure they understand who you are and what you stand for. It’s the classic one-night stand as opposed to a meaningful relationship.

However, many other marketers have managed to progress to the Reflection phase. They’ve stopped seeing digital and traditional as mutually exclusive categories. They’ve realised that an ‘and’ approach bears better results than a ‘versus’ approach. That they can have the best of both worlds: awareness and one-on-one engagement.

Traditional radio is not dead

Traditional radio is far from dead. It still reaches nearly 90% of South Africans. Marketers are beginning to understand and wake up to the fact that radio is incredibly and probably the most genial of all media in that, when you add it to a campaign with absolutely any other medium, it will improve results.

A study by Michael Gale, a marketing consultant in the US, showed how radio significantly increased digital performance. For the 13 consecutive weeks where radio supported his digital campaign visitors increased by over 20% across organic search, paid search, display and social. This wasn’t a once-off. This pattern repeated itself over numerous radio campaigns.

Gale believes this is due to radio’s ability to create top of mind awareness. “Radio grabs attention, creates interest, and builds desire that supports your digital display, SEO/SEM and social strategy. All these elements together will help generate leads that increase sales.”

Taking the ‘And’ approach involves marketers asking themselves a key question: ‘How do I continue to do the really cool things that digital has allowed me to do, but still achieve the awareness, reach and frequency staples that radio (or other traditional media) is so good at delivering ?’

Big brands are starting to get this. The recent Vodacom Instagrannies campaign was all about getting consumers to interact with a digital game on a daily basis. A marketer in the Revolution phase would have ploughed everything into digital media. But Vodacom chose to drive their campaign with a major TV campaign which was then amplified by a highly engaging three-dimensional radio campaign involving content, activations and celebrities.

What TV and radio did was to create widespread awareness of and affinity with the Instagrannies. So that when consumers did go online to play the game they already felt a connection to the characters and therefore to the Vodacom brand. This was a meaningful relationship with the customer… not a one-night stand.