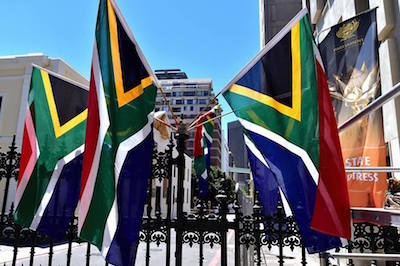 The president’s annual State of the Nation Address (SONA) is a highlight within the South African political calendar but for all the wrong reasons.

Rather than a gathering that celebrates our country’s progress, the SONA has become a battleground where opposition parties demonstrate their disdain for the ANC and its leader,  President Jacob Zuma. The Economic Freedom Fighters (EFF) have been forcefully ejected from the SONA each year since arriving in parliament for challenging the president on core issues relating to alleged corruption, and many other parties have chosen to walk out rather than stay and lend the event an air of respectability.

“Rather than a gathering that celebrates our country’s progress, the SONA has become a battleground where opposition parties demonstrate their disdain for the ANC and its leader,  President Jacob Zuma.”

Before launching into the rest of this article, it’s worth reminding ourselves of what was actually discussed in this year’s SONA. Given the drama that unfolds each year, it is easy to miss what is actually said. The Huffington Post summarises the main points made by Zuma this year here. Indeed, what characterised this year’s SONA was the president’s move towards a more populist position on legitimately urgent issues such as economic participation. Fin24 outlines this shift here.

I’ve been tracking discussions around SONA for several years now and it always produces the highest tweet volumes of any political event each year. To put it into perspective, roughly as many tweets are generated on the evening of a SONA (usually in the region of about 400 000 in my experience) as were generated in the first two weeks of the original Fees Must Fall uprising in 2015.

“…roughly as many tweets are generated on the evening of a SONA (usually in the region of about 400,000 in my experience) as were generated in the first two weeks of the original Fees Must Fall uprising in 2015”

I started collecting data on this year’s SONA on Tuesday the 7 February in order to catch the build up to the actual address on Thursday the 9th of February. All in all, I collected over 586 000 between 7-12 February. This included over 361 000 on the evening of the actual address (between 19:00 and midnight).

Using the standard technique of connecting users together when they interact by either retweeting or @mentioning each other, I constructed a network around the SONA conversation that included over 115 000 unique Twitter accounts. The result looks like this where the different coloured regions represent different communities: 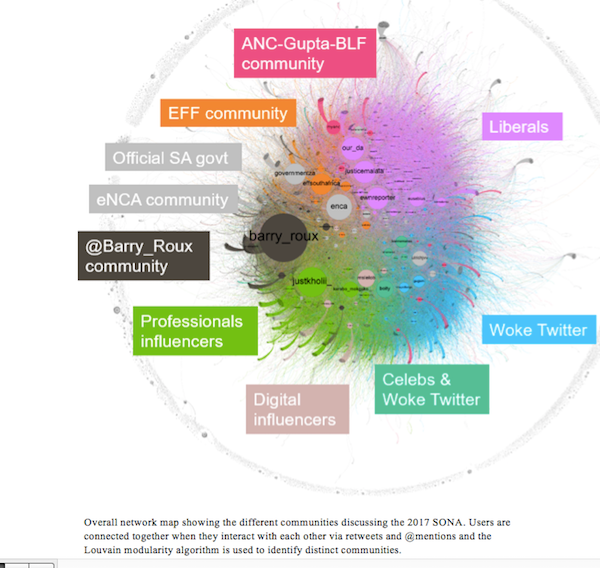 From this picture we can see that the largest communities were centred around liberal-leaning South Africans (including, but not limited to, the Democratic Alliance’s accounts), professional influencers such as @justkholii_ and @Karabo_Mkgoko (neither of whom have appeared in my data before, perhaps demonstrating how the SONA is able to pull in more mainstream South Africans) and Woke Twitter.

The ANC-Gupta-BLF community – consisting of the official ANC (@MyANC) account, Gupta-owned media accounts (@ANN7tv and @The_New_Age) and various Black First, Land First (BLF) accounts – was notable for the unusual conversation pattern that is displayed. Community members usually tend to group together into solid masses on a network map as seen by the regions of solid colour above. However, the ANC-Gupta-BLF community was quite dispersed between other communities (notice the tendrils of pink across the map, particularly in the Woke Twitter community).

It is also worth noting that, while still relatively small overall, this community was almost the same size as the EFF community which is surprising since it did not even exist in our data at the same time last year. Granted, the EFF community was smaller than last year. One can speculate about why this might be: arguably, it is because the EFF’s support base has diversified across multiple communities, as we will see below.

“…the EFF community was smaller than last year. One can speculate about why this might be: arguably, it is because the EFF’s support base has diversified across multiple communities…”

The below chart summarises the 10 largest communities. Communities are ranked based on the proportion of users in our data that fell into each community and on the overall proportion of tweets that was generated by each community. Communities that generated more tweets than we would have expected given how many users it had sit above the 45 degree diagonal line below. We can therefore say that the Liberals and Professional influencer communities were particularly vocal this year, pointing towards two particularly engaged, passionate groups of people. 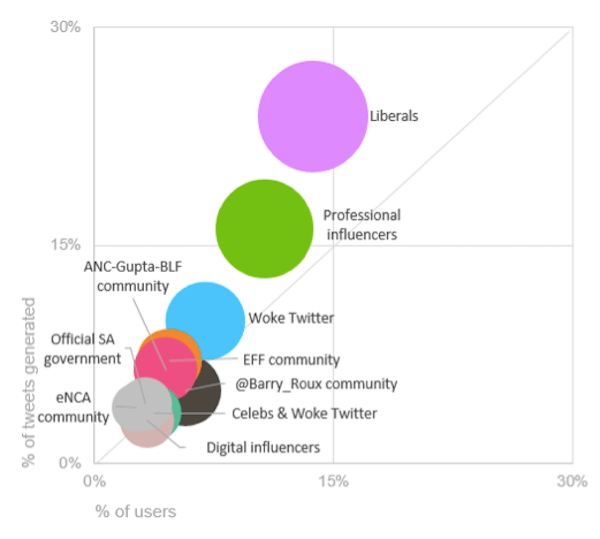 Breakdown of the top 10 communities identified using the Louvain modularity algorithm. Communities are ranked on the x-axis by the proportion of users in the dataset that were identified as belonging to that community and on the y-axis by the proportion of all the tweets in the data that were generated by members of that community. Communities that sit above the 45 degree diagonal line were particularly vocal.

In order to understand the main topics of conversation better, I created a list of subjects that were then searched for within each tweet to count up how often a word or phrase relating to a specific subject was used across all the tweets in our data. This is a somewhat crude way of uncovering the topics being discussed but it still gives us some insight into which topics resonated the most with each community, which in turn gives us some insight into their agendas and mindsets.
In the below rankings, we can see which political party was mentioned the most within each community.

More often than not, this gives us an idea of which way each community’s political allegiance leans, although this approach is clearly not perfect. For example, we’d expect the Liberals community to mention the DA most often rather than the ANC. Perhaps there really are more liberal-leaning South Africans in the ANC fold than we realise or perhaps it is true that liberals are more prone to attack ‘the competition’ on their shortcomings. It’s a matter open for speculation so this data should be taken with a pinch of salt.

Top 10 topics discussed within each community based on a pre-defined list of subjects.

From the simple topic analysis though, we can also see which hot topics were mentioned the most. For example, ‘racism‘ and ‘land‘ were high for most groups. Similarly, Mosiuoa Lekota’s statements at the SONA ensured that ‘COPE‘ featured highly in many communities, while ‘education‘ was highest for the Woke Twitter community which is closely aligned with the Fees Must Fall movement. Unsurprisingly, ‘land‘, ‘transformation‘ and race (‘whites‘) stood out in the ANC-Gupta-BLF community.

Wrapping up our analyses, below are the three most popular tweets (based on retweets) within each of the top communities to give you an idea of what topics resonated the most with them.

The Liberals community focused on sleeping ANC MPs and the pandemonium that ensued in parliament:

I had to leave #SONA2017 because we got pepper sprayed in the gallery. Zuma is a disgrace.

"It has become quite CLEAR that this Parliament no longer stands for the rule of law!" – @MmusiMaimane

RETWEET if you agree! #SONA2017 pic.twitter.com/KO8g99PaSE

#SONA2017 No matter how he may have come across he is telling the truth. pic.twitter.com/AnPqQyuECt

The Woke Twitter community emphasised the violence towards female MPs and the parallels between violence in parliament and violence committed against students:

I think the term you're looking for is 'engaged, interested citizen' //t.co/GEU2hiqTJ2

Pepper spray is not nice on members of parliament but delicious on students.

Retweet If You Are Now Considering Julius Malema As The Only Fit Candidate To Make SOUTH AFRICA GREAT AGAIN ??#SONA2017

The EFF was violently removed from parliament so that ANC MPs can sleep peacefully as Zuma speaks. ????? #SONA2017 @Julius_S_Malema pic.twitter.com/5Hl4FnPa70

The EFF community drew contrasts against former president, Thabo Mbeki, called out the Minister of Water & Sanitation, and implied that Deputy Speaker, Lechesa Tsenoli, was in for a fight:

Mbeki has been attending every SONA for the past 3 years without fail to witness that chaos.He sits there like saying 'I told you' #SONA2017

Minister of Water & Sanitation has outsourced the ministry to a Ben10, who she travelled with to Iran and New York last year. #SONA2017! pic.twitter.com/defg7Q73tv

The ANC-Gupta-BLF community characteristically zeroed in on the black versus white race narrative and called out Nando’s for their capitalist ways:

In a country where white people butcher black people's names every day, this is rich. ??? //t.co/0b3rjArPfI

Whenever we try to laugh at your jokes, we remember your prices ? //t.co/boWrB42UII

Wish you would tweet for all black people whose names are murdered daily ???? //t.co/6WalskFh5i

The Celebs & Woke Twitter expressed their disdain and embarrassment over the proceedings:

Guys, we just witnessed grown women get manhandled, if not beaten, in parliament on Live TV! And everyone in there clapped?!!!!! #SONA2017

The international guests must be feeling awkward, like when you go visit a couple and they start fighting in front of you. #SONA2017

The Digital influencers community called out the EFF and otherwise made light of the proceedings:

MUST WATCH??? The sign language translator at #SONA2017 is uncensored and sooo unlocked. WOW

Who is this Afro lady ?#SONA2017 pic.twitter.com/fE7AKVwK0O

The Official SA government community stuck to perfunctory tweets ahead of the event, although @UlrichJvV’s tweet did resonate strongly within this community:

Don't have time to listen to #SONA2017 from start to finish? RT this and we will send you the most crucial updates. pic.twitter.com/hptiXmm9eP

Don't miss our exclusive livestream of #SONA2017 RT this and we'll send you a reminder to tune in. pic.twitter.com/VajfL6hJZM

The eNCA community’s top tweets all related to live video reporting of the proceedings:

#SONA2017 Mmusi Maimane speaks outside Parliament after walking out pic.twitter.com/vekDAhILBN

So what do we take from this year’s SONA theatrics? The things that stood out for me included the fact that the majority of Twitter users are still incredibly incensed by the behaviour of our parliament and our president despite recent efforts to reframe the narrative. The race-based, nationalist narrative of the ANC-Gupta-BLF community has featured prominently in recent months and I was relieved to see that, while they definitely have a presence in our political discourse now, their polarising narrative is still drowned out by those who focus on the importance of the rule of law, the constitution and the role that only good governance and moral leadership can play in righting our ailing land. If anything, it demonstrates that our country has not been distracted by recent events and attempts to reframe the narrative. Rather we are stronger and firmer in our resolve to see right done by our people.

Finally, if I was a 74 year old President Zuma, I’m sure I would be wishing for a more peaceful life in the rolling hills of Nkandla. Instead he finds himself embroiled in the biggest battle of his career; a battle for his own personal freedom where the stakes couldn’t be higher: the soul of the ANC and the soul of our country. How much longer can it go on for?

Tags: ANCBLFDAEFFGuptasinfluencersSONAState of the NationTwitter