Vital to democracy: Bradlee Jr on importance of investigative journalism 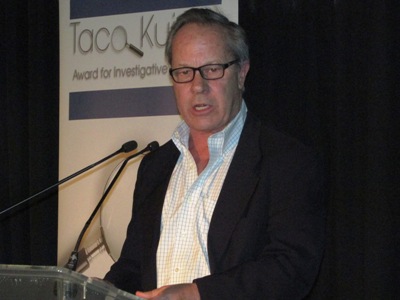 Former Boston Globe editor Ben Bradlee Jr, who was assistant managing editor responsible for investigations and projects at the newspaper during the publication’s Pulitzer Prize winning exposé of abuse of young boys by Catholic priests (the subject of Oscar winning movie Spotlight), is adamant investigative journalism is vital to democracy. Bradlee Jr was the keynote speaker at the recent Taco Kuiper Awards.

In the tough economic times that media organisations are facing, not just in South Africa but globally too, many investigative teams are being funded by third party organisations. “Partnering is the result of diminished resources, so you need partners financially,” Bradlee said. This could lead to problems, as concerns could be raised about the impartiality of the reporting, as the third party funder has their own agenda which they could push via the investigative team.

You can’t sacrifice accuracy for speed

Bradlee Jr also shared his thoughts on the growing media environment trend of publications competing to break stories. “Everyone wants to be first with a story and you want a scoop, but you can’t sacrifice accuracy and care in reporting by rushing a story into print that’s not ready. You just can’t do that. It may be tempting but it’s better to be right than to be first.”

He also touched on how social media was competing with mainstream publications to break news, but warned, “I would urge caution on citizen journalism because there’s no editing; they just throw stuff out there. I think that’s still the strength of good newspapers is that you have good editors. Every reporter, no matter how good they are, can use a good editor.”

Acting convener of judges for 2017 for the Taco Kuiper Awards, Justice Malala, echoed Bradlee Jr’s sentiments about the rushed nature of media these days.

“There’s a lot of pressure on newsrooms and journalists because there are fewer and fewer of them. There’s less and less scope to stay with a story, but I think it’s something we have to fight for. As Ben Bradlee Jr said, with people staying with a story, the beauty is that something amazing and incredible comes out of it. For me, yes I agree with the trend of ‘the story is out and I will forget about it staying with it’, the real stuff underneath and I move on to the next thing. But it is a battle that all journalists and media people have to fight for, that we stay with it, because it is never a once off”.

Malala admitted that money was a problem, as people are more reluctant to pay for media content they can get for free online. But he suggested that media houses look for alternative funding models, which would allow investigative journalism to continue. “Maybe we start knocking on rich people’s doors and saying journalism is good for the society that we live in. So even if it is a bad business model, philanthropy needs to step in, and that’s increasingly how we need to look at these things,” he said.

Malala believes even a perceived small story could lead to a major investigation. “If you look at the top 10, all of those stories started with one person, but they reverberate through society and end up on the front pages of the biggest media outlets in the country,” he said.

The impact of fake news

When asked how fake news intertwines with investigative journalism, Bradlee Jr responsed: “Let’s clarify what we’re talking about; when Trump says fake news, what he means is any story he doesn’t like, that’s what he means when he says fake news … I think that most serious people can distinguish between real news and fake news and Trump is really confusing the issue further by using the term to apply simply to stories that he doesn’t like, even though they are true of course.”

Bradlee Jr concluded by sharing advice to young journalists who are looking to get into investigative reporting, “Go for it! I mean it is hard; you are not going to get rich. But as I said in my remarks, it’s a noble calling, you get to have a lot of fun, and you get a chance to change the world.”